Later, Rep. Elise Stefanik, R-N.Y., covered similar ground in asking the witnesses about Trump's fateful July 25 call with Ukrainian President Volodymyr Zelensky: "Mr. Morrison, you were on that call, and there was no quid pro quo, correct? No bribery? No extortion?"

"Correct," Morrison replied in response to each question.

"No, there was not," Volker replied, again and again.

So we have firsthand witnesses who are not Trump allies as they went out of their way to make heir testimony help the Democrats, who all testified none of the talking points ever happened.

Here was another gem.


Morrison, in another key moment, testified Tuesday afternoon that he understood the transcript of Trump's call with Ukraine's leader wound up on a highly secured and classified computer system due to an "administrative error" -- not, as Democrats have alleged, because the president wanted to hide his conversation.

The whole D narrative is being destroyed.

Oddly enough CNN has live coverage, and they did put up a blurb with the exchange their was no quid-pro-quo .. but in their main recap that is titled "If you missed the hearings today, here's what you need to know" it is completely missing from the Morrison/Volker section. How odd that the most important testimony was not highlighted.


the sad part is we dont need her testimony or any other to undercut the charges/claims of the democrats and impeachment supporters.

we have the ACTUAL TRANSCRIPT of what was said for all to see.

in a world where FACTS exist this was enough to end the accusations faster than sunlight fries a vampire.

but sadly facts seem to be taboo when one has "truth".

if one ever wonders how/why rome fell just look at whats happening with this impeachment accusation.

originally posted by: Sillyolme
a reply to: scrounger

where EXACTLY does trump say "you need to do XX to get YY military aid"?

He does bring up corruption and that they should look into it.

along with the president of Ukraine said multiple times he did not feel there was any quip pro quo, withholding weapons until they do or pressure of any kind.

along with the clincher that THEY GOT THE AID/WEAPONS and none of what your accusing trump of demanding ever happened (or even started).

you of course know all this and just repeat the same lines that its there.

well since you said it is...EXACTLY WHAT WAS STATED that you claim says that

btw you do know alot of the "witnesses" said they didnt hear that he demanded quip pro quo but its their OPINION.

along with only two witnesses EVEN DIRECTLY HEARD the conversation the transcript covers.

with one clearly saying NOTHING ILLEGAL was said in that converstion

now your free to do your usual rants, emotional outbursts, and attacks

posted on Nov, 20 2019 @ 06:42 AM
link
I thought the bribery was arranged via those that have not/will not testify under oath? Trump, Mulvaney, Parry, Sondland, Giuliani, Parnas, Fruman etc

Edit: Just realised Sondland is testifying today. Wonder how much he is regretting buying his Ambassadorship? 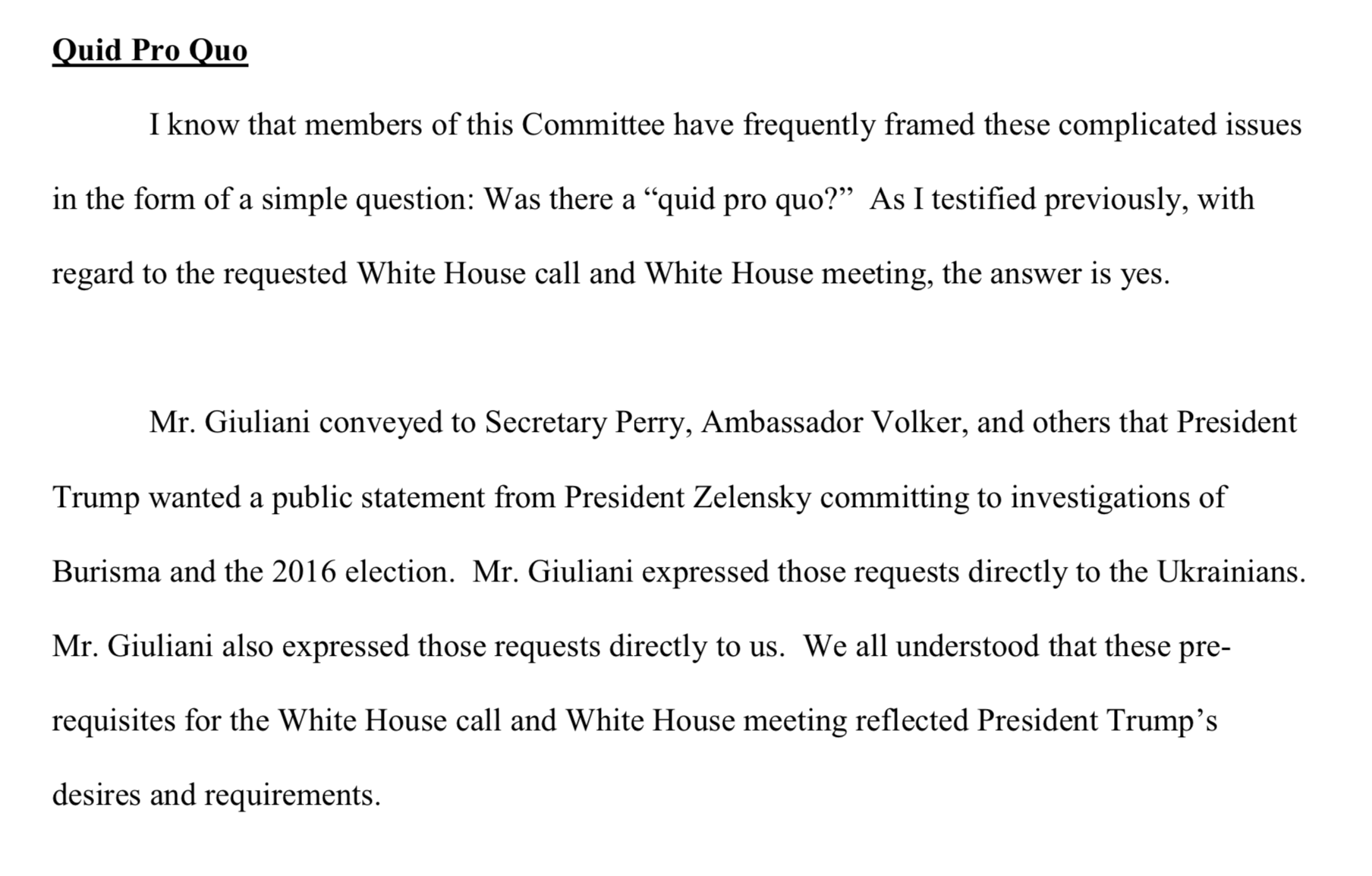 Their new talking point they pulled out of their rears is 'witness intimidation'.

Can't wait to see what it is next week.


Opening statement
edit on 20/11/2019 by RexKramerPRT because: (no reason given)

I am only saying what actually was testified to. You guys are the ones making up stuff and lacking facts.

It was for personal gain. That is the part that is going to hang him. (metaphorically)

The democrats really effed up with these hearings. I turned the tv on last night just in time to see Swalwell the fart machine try his best to trick Morrison and fail miserably.

Did you personally read the trasnscipt of the two people that only matter?

Quote all the BULL CRAP Trumps been accused of.

posted on Nov, 20 2019 @ 08:56 AM
link
I almost feel sorry for Rudy. This whole debacle is going to be piled on him from the WH. Thrown under the bus and repeatedly crushed under the tires.

The flood gates have been thrown wide open. Now Rudy will spill his guts to save his own skin.
edit on 20-11-2019 by olaru12 because: (no reason given)

posted on Nov, 20 2019 @ 08:59 AM
link
Sounds like Ambassadors who are "butt-hurt" that a private citizen (gasp!) was given the ability to work with Ukraine government officials.

They heard the "you need to do us a favor though" and they knew from the events leading up to this call what that entailed.
And these guys reported the call, to several different agencies because ALL of them were concerned with the content of the call so please dont go saying they all thought the call was hunky dory perfect like trump does. They thought something was wrong with the request. Thats why they reported it in the first place. trump asked for this favor. They all knew about the favor as it has been explained prior to this call via all these unusual channels. Everybody knew that the favor was to investigate the bidens and to announce the investigations. For personal political gain. Not for the security of the country. Not to conquer corruption LOL thats a huge laugh.

And please rants and emotional outbursts and attacks? I am so sure... not.

The· President: I would like you to do us a favor though
because our country has been through a lot and Ukraine knows a
lot about it. I would like you to find out what happened with
this whole si�uation with Ukraine, they s_ay Crowdstrike .
.. I guess
you have one of your weal thy people... The server, they say
Ukraine has.it� There- are a lot. of things that went on, the·
:whole situation .. I think you 1 re _surrounding yourse·lf with some
of the same people. I .
would like to have the Attorney General
call you or your people and I would like you t� ·get to the
bottom of it�
. As you sa� yest�rday, that whole nonsetise ended
with a very poor performance by a man named Robert Mue�le_r, an
incompetent performance-, _but they. say a lot of it started with
Ukraine. Whatever you can do, ·it's very important that· you. do it
if that's possible.

Not a thing 'illegal' about getting the AG to call him.

Especially anything relating to Crowdstrike.

Three more reasons NOT to buy in to this snip.

posted on Nov, 20 2019 @ 09:07 AM
link
It was a shock hearing Fredo Cuomo say on CNN last night after the Morrison/Volker testimony, that nothing he's heard warrants the impeachment of a duly elected U.S. President.

originally posted by: carewemust
Sounds like Ambassadors who are "butt-hurt" that a private citizen (gasp!) was given the ability to work with Ukraine government officials.

It's not that Rudy was a private citizen, the concern is the message he delivered at the behest of trump. Put Rudy on the stand and let it all hang out.