What's Univar got planned for these giant SSC tunnels under Texas

page: 1
22
<<   2 >>
log in
join
share:
machineintelligence
+3 more
posted on Nov, 16 2019 @ 06:27 PM
link
The property and buildings and the extensive tunnel constructions that was performed by the government contracts for the now de-funked Superconducting Super Collider for several billion tax dollars ended up being sold and transferred to a small chemical company Magnablend which reopened Former Superconducting Super Collider Facility In Waxahachie, TX. That company is now a wholly-owned subsidiary of Univar.

Univar Solutions operates a rather large world wide chemical waste disposal division and now is the owner of that 20 miles of tunnels under the state of Texas. From the Univar Solutions business section called ChemCare.

From their web site listed above: "Our long-established reputation as a responsible, global leader in chemical distribution makes ChemCare® the smart choice for your waste management needs."

This all has me thinking and wondering just what Univar has planned for these giant tunnels under the State of Texas? The SSC construction building is over 555,000 square feet and connected directly to the network of tunnels. You will not likely find this informed speculation elsewhere on the web. I have been looking for answers and have found the salient facts to pose this question but no reporting that actually has any of their plans as they have not announced any as of this writing to my knowledge.

They will do what everyone else does with a hole and that is fill it wast.

posted on Nov, 16 2019 @ 07:29 PM
link
Certainly an area of controversy, and UNIVAR does have controversy in other areas, seemingly unrelated, re the workforce conditions and more.

I have no idea what they plan on doing with them, but I'm fairly certain they run more extensively and much deeper than anyone can imagine. A guy I grew up with (a welder) worked on the project back when it was still in the works. He told me that to get to work each day they had to drive to a small, dirt and rock parking area in the middle of nowhere. There they got on some old school buses with blacked out windows for about half and hour to another dirt and rock parking lot with a small concrete structure which housed an elevator. He said they went down on the elevator for about 45 minutes and then exited where they got on electric carts that took them to different areas to work (about another 15-20 minutes in his crew's case). Reverse that at time to get off. He said some of the other crews had to take an additional elevator ride down further.

I'm really curious as to whether the project was actually ever stopped. If they brought in other workers after they laid off the first bunch it is deep enough that nobody might know work was ongoing.

You would imagine there would be better things to store or do with the tunnels other than toxic waste.

Then again if you claim the tunnels are full of the stuff it apt to retard most would-be spelunkers accessing the area.

Who knows what "they" may have down there?

This is what they normally do with big tunnels.

Some of the hidey holes have been discovered and neutered so perhaps they have to start again.

If you assume that everything that has happened to this hole in the ground was planned from day one then you understand what is happening.

Whatever they do, future generations will pay the price.

What the hell are they really doing down there? That is huge!

Thanks for the link Pheonix!

Univar purchased Magnablend at the end of 2012 and so far I have no idea based on research of company news what their plans include for the former SSC site. I provided one such potential use in the OP. Big hole in the ground acquired by a big chemical company and a major chemical waste management player.

Well there are an awful lot of earthquakes in that part of the state, and though they usually blame it on fracking there really isn't all that much fracking going on around there anymore. Definitely something going on!

This above article gives the sale at $500,000,000 and this is for a company with about $70,000,000 in sales the previous year so they ended up getting a business out of the deal that could pay for itself in about 7.8 years and a giant facility hooked up to a 20 mile tunnel system on several major highways near Dallas and with train access. That was one sweetheart deal for all involved except of course the tax payers who get squat for the deal paid for with tax money.

Incidentally Texas disposed of the property to Magnablend for about $11,000,000 to recover the states money to retire a bond issue for initial construction and to use state eminent domain laws to obtain the land from Texas residence for even less money.

posted on Nov, 16 2019 @ 08:53 PM
link
a reply to: machineintelligence
A common trick in your nation since you can demand public oversight AND information under your freedom of information law's is to move sensitive sites into private hand's, sometime's these private hand's are actually simply front's and behind a hidden paper trail lead back to your government black budget department's and affiliated front's such as corporate entity's.

This however would seem too public so likely as you suggest a waste disposal use, always disastrous unless those tunnel's are lined and air locked or else waste simply put down a hole as has happened time and again find's a way to leach out.

Of course since corporations are disposable entity's that can be here today and gone tomorrow it is possible to use them as a convenient method of putting off your problems onto tomorrow's generation.

Otherwise I would wonder at DUMB potential for these type of site's though as I say far too public.

Those tunnel's could be turned to good use, Irrigation connect them to a fresh water source and use them to move it around, Transport they are big enough for train's and even road way's, shelter - well that speak's for itself.

And there are many scientific uses for them if they are deep enough as well.

Fracking is bad though especially in regions with Dormant or Active faulting and it can trigger stored seismic energy allowing or causing those fault's to shift. 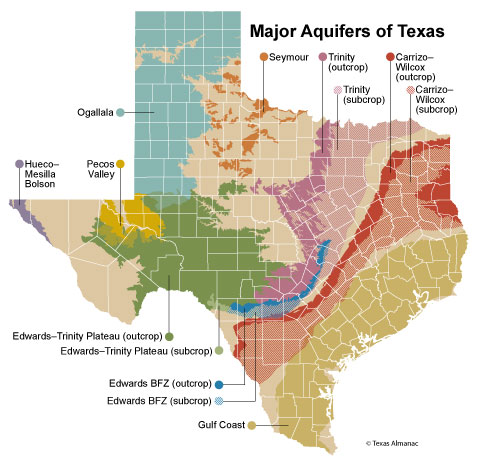 if they start putting waste in 20 miles of tunnels.... Don't drink water!

Considering that almost 6 years has lapsed since this last sale of the property from the SSC, and the business unit that Univar acquired it from has likely made them a profit by now the fact that they have announced no end use for this facility says to me that someone wants this deal to cool down until the public forgets about it before they do anything with it.

The tunnels were already built before government funding for the SSC dried up. The question on my mind is why Univar has not indicated their end use for the facility when the deal to acquire it from Magnablend has largely paid for itself.

The tunnel system was filled initially with water. They claim it was to keep the tunnels from collapsing but I am thinking that perhaps this was also done for hydro static testing of the structure.

This complex is like a underground mountain, think Nevada and the atomic waste mountain.
Now take something that is most likely equally strong and it under ground made out concrete.
How thick are the walls of this complex?
I hate to say it will be approved for what ever storage they put there because of the safety and build sects of the original design. They could section it off and store all kinds of stuff. Texas doesn't have a lot of earthquakes and is fairly stable geologically so the complex is not going any where.

Good point. It was likely designed to house a sensitive system as the SSC was going to be a milestone scientifically advanced partial physic lab of global impact so the construction however uncompleted must have been done to pretty exacting standards given the 2 billion dollars spent on it in late 1980's and early 1990's dollars.

What if they're dumping waste in under ground lava chambers?
I have no idea how stupid that question may be.