About three days ago reports started surfacing that Barr was allowing witnesses to review their testimony after the classification and redaction process. That’s definitely the last step .

With the public release of a Justice Department watchdog report on alleged Foreign Intelligence Surveillance Act abuses forthcoming, witnesses are said to be nervous about the final product.

You’re witnesses what the hell do you had to be nervous about? That statement tells me the report may have the kick of a government Mule .

People interviewed about the FBI's actions during the Russia investigation are concerned the report will portray their words inaccurately and feel as though they are being put in a defenseless position because of "unusual restrictions," according to the Washington Post.

If they’re not talking about the redaction process putting holes in their testimony. Again it’s going to be something big and they’re scared . All Clinton associates should get a GRT daily if that’s the case . ( gunshot residue test )

Inspector General Michael Horowitz has invited witnesses and their lawyers to review relevant portions of a draft report, allowing them the opportunity to offer input and objections.

That tells me it’s coming out this week. Because if not it’s going to leak .


President Trump delayed his departure and sat down with Communications Director Stephanie Grisham, Hogan Gidley, Mulvaney and others.

Like everybody else I’m sure there’s some criminal referrals coming . But I doubt anybody’s going to act on them until the Durham investigation and grand jury are finished .

A indictment from a criminal referral would lead to discovery . Just like with the other referrals on a cornucopia of charges the DOJ declined to prosecute . The DOJ doesn’t want to take any chance of letting the cat out of the bag .

Plus they can always pick the referrals back up when everything is said and done . 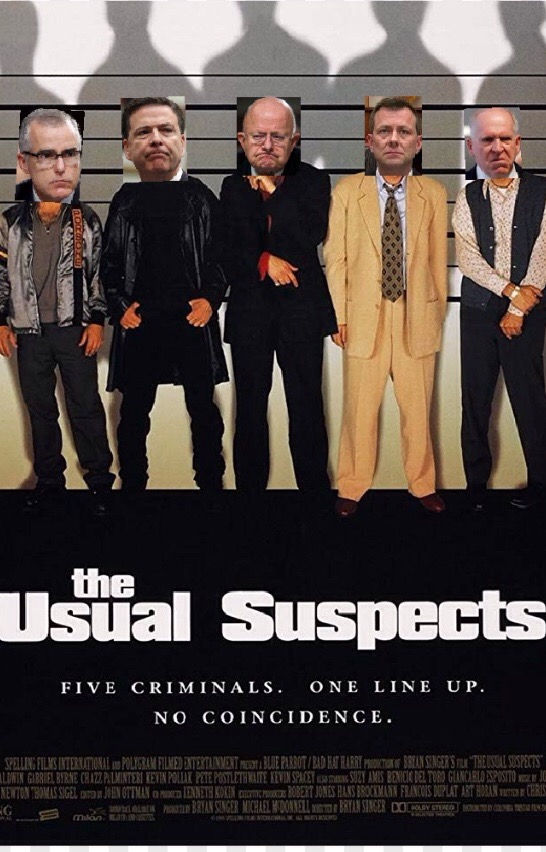 And don’t forget Thelma and Louise . 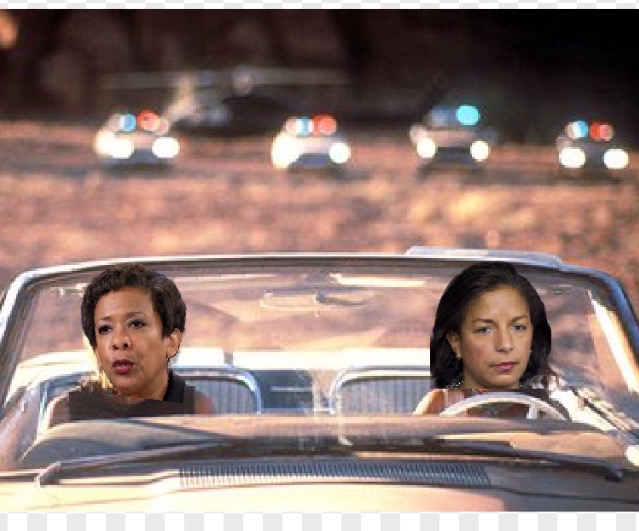 I know those could have been better but give me a break it’s my first ever photoshop . Lol

On a sidenote everyone’s been wrong about the release for quite a while. Somebody here has to get it right .

Horseshoes and Handgrenades rules whatever times is closest wins under or over .

I just hope this is not a bunch of nothing but hot air and if wrong doings were committed then off with their idiot heads.. That is a figure of speech so no need for a visit from the deep state feds to my humble abode..

Barr stated straight out the left is guilty of under mining the
rule of law in his speech to Federal Society.


I learned that move on the price is right.

posted on Nov, 16 2019 @ 07:24 AM
link
The delay could be to give Durham the time to arrange the raid-squads to arrest some people. Also notifying CNN in advance, so the have a camera team there.

If it is as damning as they claim it is, it would probably be best to do a sort of purge and arrest them all at once. Is that why all the reservists are called?

I really wonder what is in it! Also what will happen with the referrals. Will it impact the partisan impeachment farce?
Are media people implicated? House or Senate members?

It feels like an early Christmas
edit on 16-11-2019 by Goedhardt because: (no reason given)

I'm not counting on any of this because I don't want more disappointment, but I'd looove to have audio of Dem reactions when the news broke.

I wonder if they all try to stick on message and say this is Trump trying to shift focus away from himself or if they'll scatter like roaches. If they scatter look for the new wave dems to seize the opportunity and grab more power.

Everybody knows the left guilty. That’s one of the reasons they started the impeachment process so they can scream it’s retribution !!!!

Then the majority of their emotional base who doesn’t know what’s going on in the first place will believe them .

I considered price is right rules that’s why I played horseshoes and hand grenades . 🌮 i’ve got my lucky taco for Tuesday . Come on daddy needs a new case of beer !!

There’s something wrong with Apple . I looked for a Shamrock first but Instead of a four leaf clover they had this ☘️ .

I’ve been waiting for the hammer to fall on the truly guilty for 30 years .

I think I’m going to get something this time !

Do you think Twitter would consider me racist for putting Obama’s head in the white bronco ? Brennan basically threw him under the bus already . You can’t out run the long arm of the law. Well at 20 miles an hour anyway . 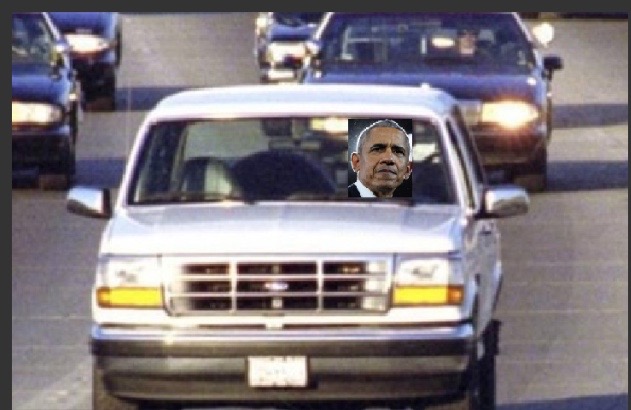 On the other hand, I think the dems over played their hand, they bet the house on a 2 7 offsuite. Now trump and his team are calling their bluff and and raising the ante. The dems pissed down the back of the wrong people and said its raining, and I hope they get what's coming to them. Most of us on ATS, know the criminality of the dems, but Im really hoping this exposes them to the masses.

posted on Nov, 16 2019 @ 08:58 AM
link
Since Horowitz has already referred McCabe and Comey for prosecution, I'm definitely predicting that more prosecution referrals are coming. The question is who will the DOJ decide to move forward with prosecution on the next IG report? That's anyone's guess.

I'm also predicting that the IG report on FISA abuse will be released on Wednesday, November 27th (not sure of time) just in time for everyone to talk about it around their Thanksgiving tables on the 28th.

Kind of glad you brought up CNN. A few days ago me and three other people were having a polite meaningful conversation concerning the constitution . On the baby Trump balloon thread .

I ran across this supreme court case .

It seems that during World War I Schenck was handing out leaflets urging people not to report for the draft .

You have to read into the summary a little more to see that the ruling wasn’t because we were at war it was because it could present a clear and present danger .

The Court held that the Espionage Act did not violate the First Amendment and was an appropriate exercise of Congress’ wartime authority. Writing for a unanimous Court, Justice Oliver Wendell Holmes concluded that courts owed greater deference to the government during wartime, even when constitutional rights were at stake. Articulating for the first time the “clear and present danger test,” Holmes concluded that the First Amendment does not protect speech that approaches creating a clear and present danger of a significant evil that Congress has power to prevent. Holmes reasoned that the widespread dissemination of the leaflets was sufficiently likely to disrupt the conscription process. Famously, he compared the leaflets to falsely shouting “Fire!” in a crowded theatre, which is not permitted under the First Amendment.

Some cases ruled the other way because the court determined it didn’t meet the standard of a clear and present danger or irreparable harm .

Is handing leaflets out qualifies . It seems like classified leaks to the news organizations that could harm the 2016 elections. Might.
Plus all the leaks that have been plaguing the administration and preventing it from functioning as it should.

Throw in Italy, Ukraine in the UK sure makes you wonder .

There’s another case ruled on in 2001. Thats conclusion said it’s OK to Publish illegally obtained classified information as long as the person wasn’t involved in obtaining it illegally.

Those SOBs in the media know they’re breaking the law when someone leaks directly to them . That makes you wonder to .

In a 6-3 opinion delivered by Justice John Paul Stevens, the Court held that the First Amendment protects the disclosure of illegally intercepted communications by parties who did not participate in the illegal interception.

Let me make this clear because someone always says it. I am not a lawyer I don’t think I’m a lawyer and I’m not rendering a decision. 😇

This is just food for thought and discussion .

We won’t be able to prosecute Susan rice, she got away .

*note it’s obvious the cops and that sweet little things parents were in on it. So I should be able to get away with that one too .

Everybody knows the left guilty.

Guilty of what? when was the trial?
You guys spout this crap all day everyday... it is almost as ridiculous as the lot of you.

The night before release, there may be a DOJ notification to the press, of a briefing the next morning, featuring Barr and Horowitz...and maybe Durham.

I am going with at this time next Saturday, 11:05 est... nothing will have happened.

posted on Nov, 16 2019 @ 10:07 AM
link
Is there another IG report coming out this week?
How exciting for you folks.
I wonder who they will decline to prosecute this time.