When Rep. Elise Stefanik finally got a chance to speak at today's "Schiff Show," she really scored one for the team. Now I can see why Schiff had such a hard time recognizing Rep. Stefanik for a parliamentary question:

Later, at today's proceedings, Rep. Stefanik got Ambassador Marie Vovanovitch to admit that Obama's Administration knew that Hunter Biden's energy contract with Burisma Holdings, reeked of corruption. So why make a thread on this? Because “enquiring minds want to know” the truth...something you'll never hear on MSM.

If Obama and his administration were concerned over Biden's role at Burisma, why wouldn't Trump be as well? Why would Burisma Holdings lobby for the Obama administration to drop the probe investigating these corruption allegations?

Why would Sleepy Joe insist to this day that he and his son "didn't do a single thing wrong?"

"He did not do a single thing wrong."

The Democrats act like all this is insignificant and are trying really hard to sweep the Biden's corruption under the rug. Meanwhile, they are focused on impeaching a sitting President based on heresay evidence, that has already been discounted by the Ukraine’s Foreign Minister.

“I have never seen a direct relationship between investigations and security assistance,” Prystaiko was quoted as saying by Interfax.

network dude
+4 more
posted on Nov, 15 2019 @ 02:51 PM
link
As I said in another thread. If it turns out that Biden's Boy and Biden's actions were illegal, then rather than impeach Trump, those TrHators should be thanking him. This guy could have been the next president, and he's looking like he's bought and paid for. Isn't that what the whole 2 year investigation into Trump was about? Jesus, he saved like 40 million dollars.

It is insignificant to everyone except ardent Trump supporters. You guys are really starting to appear desperate.

Where’s the DOJ investigation of the Bidens? Surely if Mr. Trump were concerned enough about possible crimes of two American citizens that he tried to get a foreign power to investigate them, surely the DOJ has been working on this for what, two years?

What’s the results of that investigation? Because making ridiculous money is not a crime.

... and neither is being Biden’s son.

As I've said before, this is a 4D chess match between Soros & Bannon, right now the objective is to consolidate power in 2020, later on is the dismantling of the old deep state...


You guys are really starting to appear desperate.


What’s the results of that investigation?

We are watching the results of it at the moment, they are trying to use it to impeach Trump.

posted on Nov, 15 2019 @ 03:02 PM
link
The Democrats seem to like telling people who say nothing happened to them that, oh yes it did because we say it did.

posted on Nov, 15 2019 @ 03:03 PM
link
The United States Senate is gearing up to subpoena the bidens, The Whistleblower, the entire lot of them.

originally posted by: Jason79
a reply to: Gryphon66

Uhm, we totally have a treaty in place with the Ukrainians allowing just that.
edit on 15-11-2019 by KnoxMSP because: (no reason given)

Why the Bidens? Haven't you seen Biden's new web page? Sleepy Joe has all the "facts." Everything you heard about him and his son are all "lies." 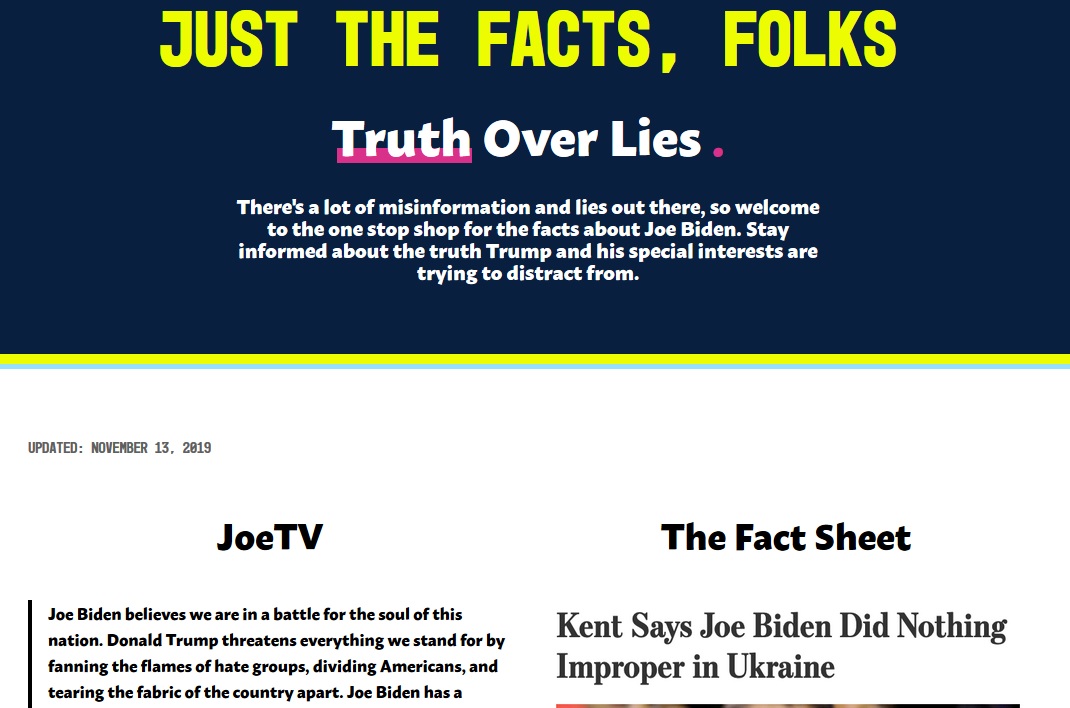 Yovanovitch needs to be subpoenaed by Senate investigators.
edit on 11/15/2019 by carewemust because: (no reason given)

originally posted by: Gryphon66
a reply to: shawmanfromny

Where’s the DOJ investigation of the Bidens? Surely if Mr. Trump were concerned enough about possible crimes

According to the DOJ, President Trump never even asked AG Barr to look into it.
That is bizarre in a world where the President even for a moment thought there was a legitimate concern to be investigated.

After months of a shadow campaign involving Giuliani trying to gather "evidence", Pres. Trump never once consulted his AG?

IMO this is in keeping with the important distinction that President Trump asked for a public announcement by the President of Ukraine, approved by Giuliani.

He was interested in a public statement he could use in the campaign, but there is no evidence he was ever sincere about an investigation.

In prepping for her conformation hearing she was asked a hypothetical question about Hunter Biden.... That's it right?

That is what you are talking about? not even a nothing nugget lol... except to you trumpfluffers

posted on Nov, 15 2019 @ 04:16 PM
link
Is it just me or does Ambassador Marie Vovanovitch look like Ghislaine Maxwell with red hair and glasses?

a reply to: highvein
nope have you? first I have seen of it.

I have heard the word over the last few years but when have they tried to impeach trump for the last 3 years?

posted on Nov, 15 2019 @ 04:20 PM
link
Hours and hours and hours spent being obsessed with this sham. They've got ya'll hooked. I guess y'all have nothing better to do than to obsess over state-sponsored theater and propaganda.

One day you'll realize.... maybe but I won't hold my breath. Until then, you'll keep being strung along. No one has gone to jail, no one. Meanwhile the ultra-rich committed highway robbery with their tax plan and terrorists continue being armed worldwide by the Sauds. 🤣