Q must be having a late night. That sounds fairly damning in the Barr video clip. 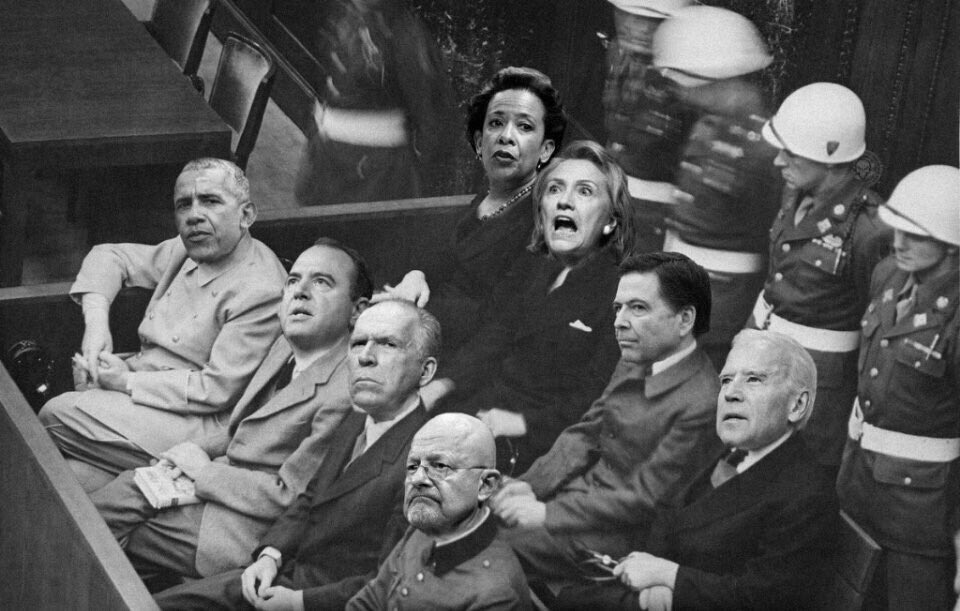 Recently Devin Nunes confirmed what I stated over a year ago. What some here STILL refuse to believe is happening before their eyes. Y’all here and anons all over as well as everyday patriots across the world and here in America are the digital army. POSTINGS HERE AND ELSEWHERE ARE BEING USED IN INVESTIGATIONS.

What is POTUS doing?
Exposing the truth. Great Awakening.
We (those of us here and elsewhere) need the gen pop to be aware of what’s all been going on behind the scenes before the Storm hits. Timing is critical. My view is that we are in the Storm. The front end. When POTUS states “My Fellow Americans, The Storm is Upon Us..” that’s when it gets biblical for them. Justice is coming.

This time of year is when hunting intensifies.

I think President Trump is pointing Rudy Giuliani and OAN (One America News) Network in the right direction for discovering corruption between U.S. Politicians and (for now) Ukraine.

He (President Trump) can't just come out and spill the beans on what he's being told in classified briefings, but he can point OAN/Giulani to the sources to dig, and then feign "Surprise and Amazement" when truths (that he already knows) are revealed.

Q and Anons are key players in this movie too. "SOMETHING BIG IS COMING" has been posted by "Q", at least 3 times over the past week?

I stumbled into this about AI and a lawsuit in California over Chinese using Silicon Valley AI to torture people and steal their organs.

Thanks for refining what Devin Nunes said on FoxNews this past weekend. I knew he stated that online investigators helped him a lot when he was the House Intel Chairman. Thanks to your revelation, I see Congressman Nunes was partially referring to the top ATS thinkers and investigators in the forum's Q threads. Awesome!

I hope you're doing well, in all areas of your life, 0311Warrior!

posted on Dec, 28 2019 @ 01:08 AM
link
Speaking of Patriots out there doing digs, I dont know if any of you are aware, but there is one heck of a digger that Im actually friends with you should be aware of. Talk about DEEP DIVES. She doesnt screw around. I would recommend her whether we were friends or not.

Do yourself a favor and just look around on her site. She nailed down Haiti and all the Clinton and Clinton Foundation etc etc etc tight. She is a true PITBULL. Those of you that consider yourselves "readers." will be in for a real treat.

ETA: Stay safe warm and dry out there Warrior


...and an alternate anagram may point to "suicides"...

ALWAYS good to hear from a Marine.

WHEN did Attorney General Barr give this interview? I want to listen to more of it.

If you take the little gold nuggets that he shares from all interviews, and put them together, Barr genuinely suspects that President Trump was (and still is?) the target of a U.S. Government coup against it's own leader.

🎥BROUGHT TO YOU BY....
@SpeakerPelosi & @GavinNewsom
twitter.com...

In an exclusive interview, Attorney General William Barr spoke to NBC News' Pete Williams about the findings on the Justice Department Inspector General's report on the Russia investigation and his criticisms of the FBI FISA abuse.

Im so glad I saw that city 26 years ago. It's a shame what has happened to it. Even worse, it didnt HAVE to happen.

Great to hear from you Warrior!


My view is that we are in the Storm. The front end. When POTUS states “My Fellow Americans, The Storm is Upon Us..” that’s when it gets biblical for them. Justice is coming.

I'm now inclined to think that Lines 1 & 2 may not be tied together and may not mean that POTUS will TWEET "My fellow Americans, the Storm is upon us......."

Instead, line 1 means watch for POTUS tweeting 55 times in a day,
and line 2 could mean tweet or POTUS speaking at a presser etc.

ETA - I think this POTUS tweet indicates that Jon Voight has a role in delivering the "something BIG" that is coming... either he will say POTUS is Q+ on television, or he will say "My fellow Americans, the Storm is upon us..."


Academy Award winning actor (and great guy!) @jonvoight
is fantastic in the role of Mickey Donovan in the big television hit, Ray Donovan. From Midnight Cowboy to Deliverance to The Champ (one of the best ever boxing movies), & many others, Jon delivers BIG. Also, LOVES THE USA!
8:48 AM · Dec 27, 2019

posted on Dec, 28 2019 @ 02:22 AM
link
This is tragic and it feels too coincidental to me, especially since Dr. Epstein recently went up against Hillary Clinton

My beautiful wife Misti, a published poet, succumbed last night to injuries sustained in a car accident. I was supposed to die in your arms some day, but a slippery road has ruined everything. You were not just my love, you were my greatest adventure.

Thank-you! Watching it now. Like Barr's interview with Martha McCallum, this one Didn't receive much press. Of course we know why.

Gloria Vanderbilt! Thanks, I had completely forgotten her name. I do remember the pictures associated with her that were discussed here. Her empty underground swimming pool with the slaughter house vibe that looks eerily similar to the painting of the little girls kneeling in an empty pool with their hands behind their backs - shudder. She is currently brought up in some celebrity deaths of 2019 articles.

Plus the resonance of that not so common name #EDKH #KTWK, the Epstein–Barr virus (I mean seriously, "reality", what's that all about?).

edit on 28-12-2019 by MindBodySpiritComplex because: (no reason given)


As an online discussion grows longer, the probability of a comparison involving Nazis or Hitler approaches; that is, if an online discussion (regardless of topic or scope) goes on long enough, sooner or later someone will compare someone or something to Adolf Hitler or his deeds, the point at which effectively the discussion or thread often ends. Promulgated by the American attorney and author Mike Godwin in 1990

Godwin has stated that he introduced Godwin's law in 1990 as an experiment in memetics.

I always felt there was something off about that whole Thai Cave rescue thing:

See also here and several other posts further down on same page.