Nanocrystals known as Quantum dots... funded by Gates Foundation and being surveyed in Kenya, Malawi, and Bangladesh.

do you think this is accidental?

Since misspellings matter, the Admiral's name does not have a 'd' in it. It's Adm. Mike Rogers.

here's link to article @ the hill

Adam Schiff has long been on the payroll of Ukrainian oligarch, Igor Pasternak, who according to Douglas Gabriel has replaced Adnan Khashoggi as the preeminent arms dealer for Syria, Libya, etc.


“How come every single long-tenured member of the Senate or the House are multi-multimillionaires? Hundreds of millions, usually when they make, you know less than $200,000 a year? How can that possibly be true? Well, that’s because they all get paid off.


. The big oil pipeline running out of Kazakhstan to Turkmenistan, then to Russia and then to Ukraine and then into Europe – was bringing in 40% of the gross domestic product of Ukraine.

posted on Dec, 20 2019 @ 04:58 PM
link
Trump Has Engraved Envelopes Hand Delivered To Democrats On Capitol Hill — With His F*** You Letter To Pelosi Inside!

We all know President Trump is a master troll, but he topped himself this time.

The White House on Wednesday dispatched some staffers to head up the Capitol. They brought with them beautiful cards with hand-drawn calligraphy on them. They looked like Christmas cards.

But inside the envelopes addressed to lawmakers were copies of President Trump’s brutal letter to House Speaker Nancy Pelosi.

“True story: there is a White House staffer going around the Senate delivering to each office, as a package, the incoherent, scathing Pelosi letter AND … wait for it … a giant 16×12 White House Christmas card (along with, implausibly, a second smaller Christmas card). What a day,” Sen. Chris Murphy (D-CT) wrote on Twitter.

The White House staffers made sure they had one for Rep. Alexandria Ocasio-Cortez, too. She wrote on Twitter: “They’re coming into the House, too. (No Christmas card here – but no coal, either).”

posted on Dec, 20 2019 @ 05:03 PM
link
Presiding FISA Judge Rosemary Collyer to Step Down Days After Rare Public Rebuke of FBI – Will be Replaced by Obama-Appointed Judge


Not too impressive when you know that the court was aware of the misdeeds shortly after they were perpetrated. Not surprising that Judge Collier is suddenly going to retire.

posted on Dec, 20 2019 @ 05:09 PM
link
You’re leaving us lots of creepy dirty Santa 🎁 gifts, right here before Christmas EMN! Passing this, and the robotic immortal nanobug drones to the person sitting to my left, after first setting them on 🔥 fire!
😩
ETA: I see Troy reminding us not to trust the potluck!

I’d rather see one of the cards which were passed out at GHW Bush’s funeral.
Haven’t seen anyone posting photos of those! 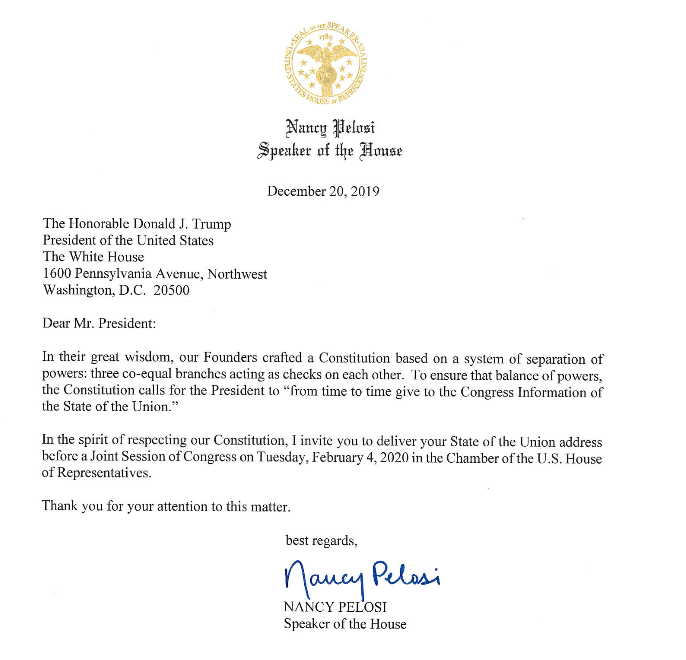 Jeff Van Drew told president Trump and the American People that the Democrats came to him and told him if he does not vote for Impeachment that they would Destroy him. This should be a bigger story than him changing Party's .

Well they don’t matter when I make them since I’m not Q (that you all know of, anyways 😀😀).

posted on Dec, 20 2019 @ 05:53 PM
link
Have you guys seen this yet? Supposedly this is Trumps response to Pelosi’s letter inviting him to do the SOTU address. I don’t think it’s real, but funny nonetheless.

I don't know PokeyQ. When you turn that avatar slightly clockwise, that big BB (belly+butt) looks curiously like a Q.

Ahhhhhh! You found me out!😂😂

Is it likely that the FISA court will want to know WHY Clinesmith altered Page's and possibly other applications? I hope Durham's team is finding out that Clinesmith was "following orders".

The Foreign Intelligence Surveillance Act court (FISA) that approved FBI surveillance of former Trump campaign aide Carter Page is now investigating other applications it’s received from one of the agency's attorneys accused of making an inappropriate change to the Page application.

The review, which was announced in an order released Friday, hints at a comprehensive effort by the secretive court to reevaluate surveillance after the Justice Department inspector general's report found errors in the Page application process.

In the order, written on Dec. 5 and declassified Friday (12-20-2019), the court requested that the executive branch identify "all other matters currently or previously before this Court" that involved FBI lawyer Kevin Clinesmith. The court also requested explanations of how the Justice Department and FBI are ensuring that Clinesmith’s submissions were accurate.

The order goes on to ask for information as to whether Clinesmith faces possible disciplinary action from the bar regarding the change he made in the application for surveillance on Page.

It was not immediately clear if the court would publicize the administration's responses once they are received.

Edit to add: Looks like FBI Director JAMES COMEY was in charge of the illegal operation.

Well, that's interesting. She did not send Trump an invitation last year.


Now, who told Comey to SPY on the Trump team? James Clapper already said it wast Barack Obama, but I suppose the DOJ has to go through the motions of working up to the Anointed Law Breaker.

This ^^^ is the crux of both the systemic problem and the Anon's problem with crying "doitQ".

renOgade was the Commander In Chief, like DJT, and Washington etc. If he says "spy on DJT" is JC allowed to say "screw him, not doing it?" Chain of command.

If Brennan, Clapper and renOgade say "James, DO YOUR JOB AND SPY or you know what will hap-" is he just supposed to say "oh, well all the non-HRC people will protect my family if I ignore the order?"

If JC fails to spy and she wins, he's dead and so are his family members.

Everyone NOT in a position of control always thinks the world is like the movies, where someone says "I'll take them on and do the right thing!" Yet Arkancide is a THING!!! A real damn thing!

From the cheap seats it is impossible to know who had a gun to their child's head, who volunteered and who was just plain stupid.

I've said it before, the names we know are not in charge of anything - how do I know this? The turnover, they all get replaced often and yet the power structure remains in place.

Once the hidden one's are dealt with, then the public symbols will be addressed in a manner that fits out state of mind at that time, not our pre-Q state of mind.