Not only another dupe but another ZERO:ZERO:ZERO MARKER
(more simply put... a [0] Delta)


Something BIG is coming!

If you read the next few posts on Feb 18th, Q2802 then gives a picture of Q2681 which has a timeline leading to "Sky is falling" projection by Dems... followed by Public Awakening!

originally posted by: PokeyJoe
Something BIG is coming!


I'm starting to get the feeling that the meaning of "BIG" for Q is not quite the same as what we all hope "BIG" means.

This is turning out to be inside baseball, not the Earth shattering event we're all rooting for.
edit on 19-12-2019 by LanceCorvette because: (no reason given)


originally posted by: dashen
a reply to: PokeyJoe

Yea, yea. So big.
Tick tock and all that.

For the "what" ... Depends on your perspective . Me, PRAY for a Change to believe in . ThankQ


The U.S. Army has made permanent a classified aviation mission over Washington and disclosed that it’s aimed at responding to a terrorist attack or natural disaster........

While the details are classified, the operation supports the military’s National Capitol Region mission “to be prepared to respond to a natural or manmade disaster,” Belinsky said.....

Asked if the forces taking part in the ongoing mission include specialized commando units of the Pentagon’s Joint Special Operations Command -- such as the Army’s Delta Force, the Navy’s Seal Team Six or the Army’s separate 160th Special Operations Aviation Regiment --- Belinsky said only that forces may come from active and reserve units.


Currently I'd call DC a man-made disaster ... And
Believe me you don't want a Blackhawk focusing on you, especially in whisper mode ....

posted on Dec, 19 2019 @ 04:14 PM
link
MARK MEADOWS is leaving Congress. Will not run for re-election, and is leaving open the possibility of leaving sooner for a job helping TRUMP.
POLITI CO

originally posted by: EndtheMadnessNow
MARK MEADOWS is leaving Congress. Will not run for re-election, and is leaving open the possibility of leaving sooner for a job helping TRUMP.
POLITI CO


That would be the smart play, to have the new person run as the incumbent. He's been pretty good in all of this.

Lots of Marker numbers in this article:


The streets of the nation's largest city were met with a literal wall of winter on Wednesday when a snow squall brought blinding wintry conditions to New York City, hours after triggering a deadly pileup on an interstate in Pennsylvania.

The National Weather Service office in Upton, N.Y. issued a snow squall warning around 3:23 p.m. on Wednesday for the greater New York City area, which warned of "white out conditions" in heavy, blowing snow for a 45-minute period. The wall of white arrived in the city around 4 p.m.


The crash involving around 30 cars and trucks was reported at about 1 p.m. on I-80 in White Deer Township as blinding snow made the highway slick, state transportation officials said.


Evangelical Community Hospital in Lewisburg reported receiving 37 patients from the crash. At least three were transferred to other facilities. Another 21 people who weren’t patients were housed at the hospital and a family center set up at a hotel.


The Union County coroner's said that one man died in the crash, and the Montour County coroner said around 11 p.m. a second person had died at a hospital. Officials told FOX56 the state of the vehicles was so bad that crews had not been able to get the man's body out, hours later.

The interstate was closed for 34 miles in both directions until eastbound lanes reopened five hours later. Westbound traffic still was being detoured Thursday morning along I-180 and Route 220 while tow trucks worked to remove the mangled cars and trucks in the wreck.

I wonder if someone was smuggling guns, troops or traffickees into NY?

...for federal judge Harold Louderback of California.... Louderback's Senate trial consumed nearly all of May 1933, during the First Hundred Days of the New Deal era, one of the busiest legislative periods in congressional history. Democrats charged Republicans with using the trial to delay a banking reform bill, a charge Republicans denied. Tempers in the Senate frayed as witness after witness cast doubt on the charges. The Senate finally voted on May 24, 1933, acquitting Louderback on all five articles.


Nixon challenged the use of an impeachment committee on constitutional grounds. In 1993, in the case Nixon v. United States, the Supreme Court upheld the Senate’s right to determine its own procedures, including the use of a trial committee. 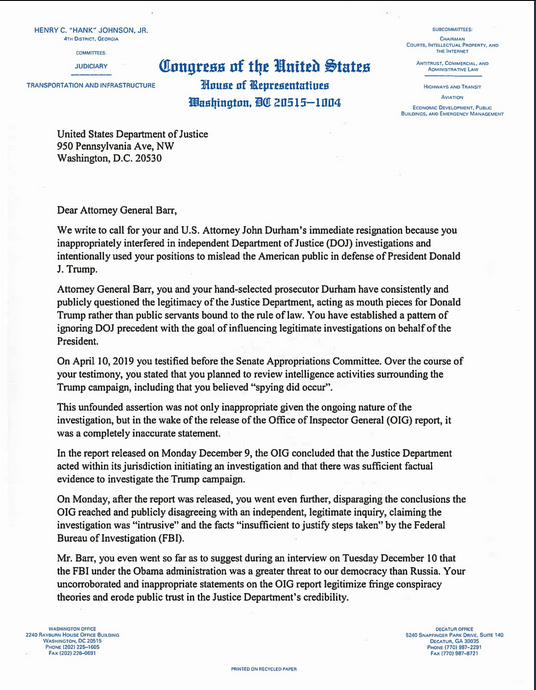 He thinks Barr appointed Durham, it goes downhill from there.

Oh and Talib, Jackson, Cohen also signed it so there's that.


They have Hank leading the charge...hmmm..
It's getting serious now ... LoL

I cant believe he is still even a congressman. After his "mysterious Hep-C" issues and becoming increasingly slower and more confused I have a hard time believing this guy isn't truly mentally challenged/disabled.
edit on 12/19/19 by Vasa Croe because: (no reason given)

originally posted by: Vasa Croe
a reply to: crankyoldman

I'd like to know where he went to school.

Wow! Amazing that you caught that error in that video. A link to that video wasn't included in the two Q drops, so finding that mistake is pretty impressive.

The double post may also be referring to the original Epoch article and then the updated article eight months later.

The other thing that jumped out at me was this blurb mentioning 99:

This information was disclosed in a 99-page FISA court ruling on April 26, 2017, that was declassified by Director of National Intelligence Dan Coats.

No kidding - If there was even a chance of that, I'm sure they'd anchor it down ....or do whatever they do to keep islands from tipping over.

I just came to post this letter. I am sitting here in shock at the utter buffoonery exhibited by these Democratic Representatives. It seems they picked a who’s who of the most retarded members of Congress to sign this letter. They’re still trying to claim that the FBI didn’t spy on Trump and that they did everything by the book. At what point do letters like this go from something for us to laugh about, to an actual issue? I cannot in good faith think that these people actually believe what they wrote. And to go after John Durham! WOW! I think they have forgotten that the AG runs the DOJ. If he wants to investigate them, he can!
edit on 19-12-2019 by PokeyJoe because: (no reason given)

Are duplicates like 3738 and 3739 at qmap.pub... , the result of a software glitch with the new server/system? I don't recall that happening before...but it's happened twice since transitioning to the new platform.


Earlier Wednesday, The New York Daily News and New York Post reported that prosecutors told a federal judge that no one can locate the surveillance footage around Epstein’s cell for the hours before he was found semiconscious, with marks on his neck, on July 23 in the cell he was sharing with Nick Tartaglione, the former cop from Westchester County, New York.


Judge Kenneth Karas of U.S. District Court in Manhattan has asked prosecutors to continue investigating what happened to the footage.

He’s literally the dumbest sonofabitch in Congress, and that is saying something. How does he keep getting elected?

Mental giants they are not. I doubt some of these people actually earned their credentials. Let's face it. Most of those on that list are not exactly Mensa candidates.