posted on Dec, 9 2019 @ 05:31 PM
link
a reply to: Creep Thumper
Something here for your goodself plus SouthernGift;

Before dabbling in such , would advise you to read a handy book for beginners and regardless of other such youtube tips, Never start the Microwave Magnet removal ..............Never, until you are well learned. They also have Capacitors inside them that have a habit of remaining fully charged and the charge of such is High enough to be Fatal.......

Just a small tip for anyone who does have a few handy Magnet. You may already know such, but this did help me - back in late 50s / early 60s, to start building a radion powered by Battery. Eventually encouraged further study plus QUALIFICATION For Amateur Radio...........so here it is;

Heh, think you're replying to a previous post but found she quoted that line with the "[y]" from the OIG report, pg 349 of the PDF.

I was wondering who he was earlier.
Lawmakers in 44 states, Washington, D.C., and Puerto Rico have taken steps to empower students and families through school choice.
twitter.com... 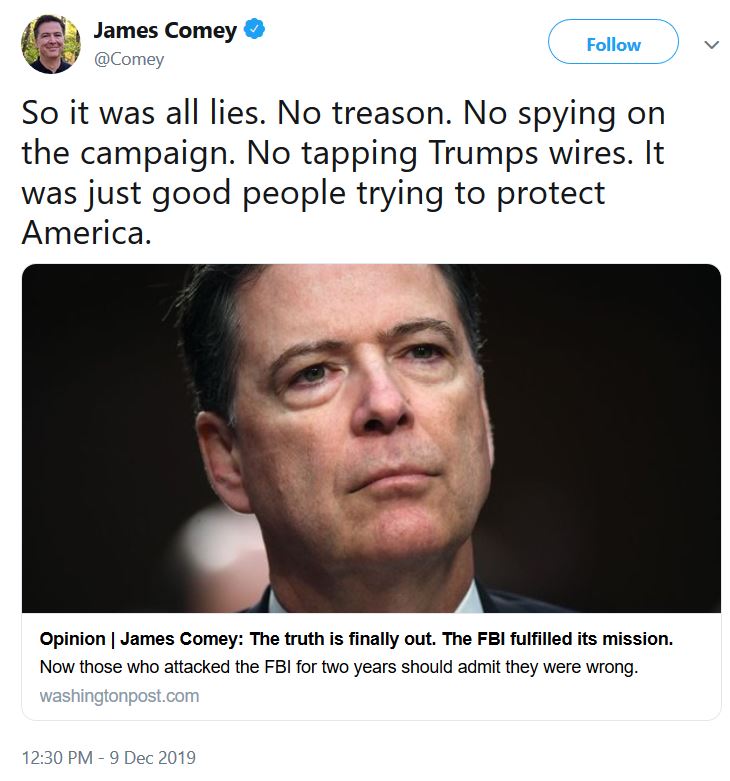 "The FBI fulfilled its mission" my arse. 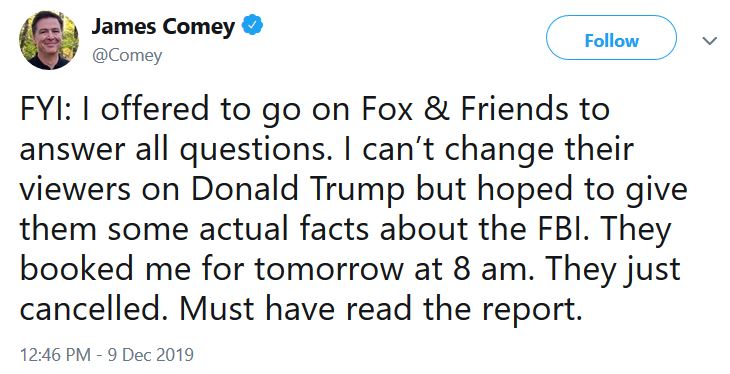 Pg 9 of OIG Report:
"Our review found that FBI personnel fell far
short of the requirement in FBI policy that they ensure
that all factual statements in a FISA application are
"scrupulously accurate." 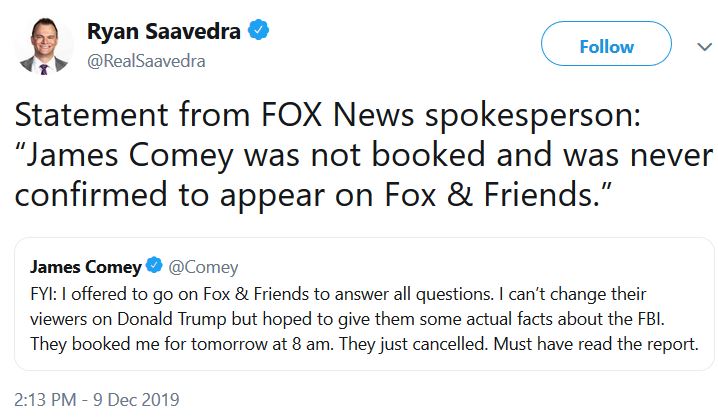 Heh, on that note, Mission fulfilled!

One thing. Comey/Corney/Reinhold --- whatever you want to call him, thinks writing a slick opinion piece in WaPo with all the articulate pretzel twisting he can muster is going to baffle the American People with bullspit?!

That IG report shows Comey was a terrible leader and either super inept, lazy, or thought his special kind of evil served a higher purpose. The man, imo, is a pompous @$$.

BREAKING: Nadler just reluctantly agreed with GOP request to enter this POLITICO.com... article into the official impeachment record. This article is key. It debunks Dems & MSM talking pt that Ukrainian interference in 2016 election was "debunked" 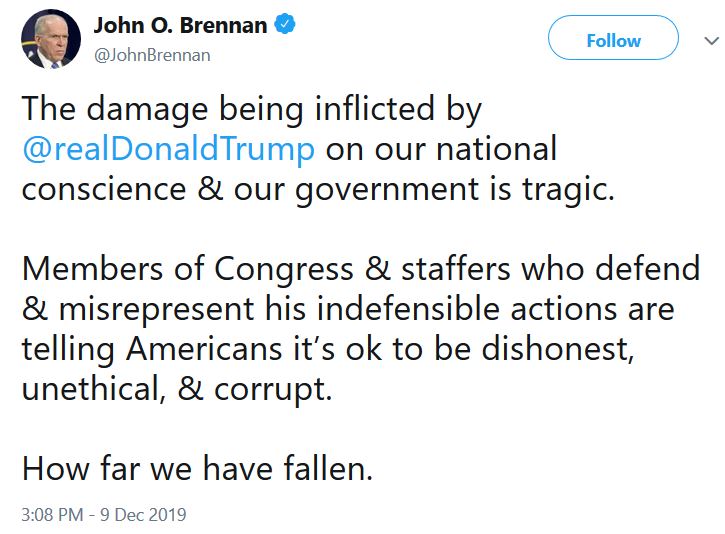 posted on Dec, 9 2019 @ 06:52 PM
link
Why was the American Embassy in Ukraine calling to inquire about the release of military aide to begin with , wouldn't that seem like a call that would be made by someone within the Ukrainian military or by their Government ? IDK, seems like these embassies and foreign nationals are a big part of the problems. Bridges ? Definitely seems to be part of the ' web ' of crime.

POTUS did make a big deal out of how much cheaper he was able to set-up Israeli embassy, how many billions in tax dollars are funneled into/through these embassies ? I need to look into what exactly they do, don't seem to be very good at getting hostages released. Sure didn't help the poor soul's in Jones town.

It seems obvious now, but I just learned that's where the term " don't drink the kool-aid " came from. Jim Jones was associated with several politicians, mostly, wait for it...CA Dems, Willy Brown, Mayor Moscone ( who was assassinated ) , a new book just came out by Mark Strichrrz, another rabbit hole, gun running, human trafficking, criminal enterprise at the end of the day. 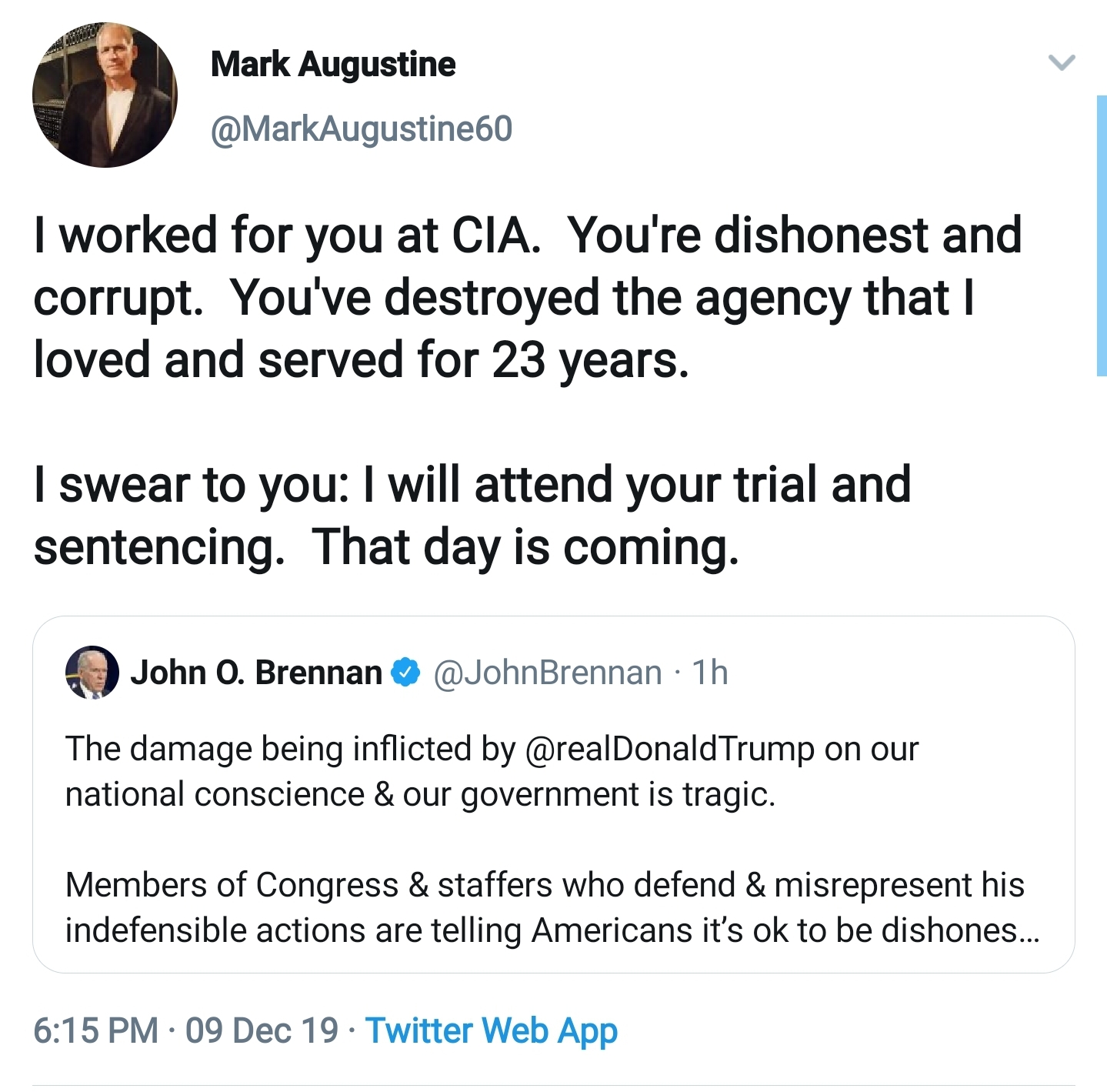 Between Corney, Brennan, Clapper, Strozk, and the Concubine of Justice, Lisa Page... the Barr & Durham statements should be repeatedly blasted at them.

They know no shame.

Barney Fife tells them he could not solve the FISA caper but Sherlock Holmes mocks Fife and his simpleton investigation. They choose to trumpet Barney??

This will end horribly bad for the Coup Conspirators.

Ex-CIA officer gets 19 years in China spy conspiracy...this happened under the radar in November.

19 years in prison Friday for an espionage conspiracy in which prosecutors say he received more than $840,000 from China to divulge the names of human sources and his knowledge of spycraft.
The sentence imposed on Jerry Chun Shing Lee, 55, was significantly longer than the 10-years sought by defense attorneys.

originally posted by: Creep Thumper
I don't know. After three years, I think we need another meme.


No, lol. Sometimes it feels like a BSOD but in our conditioned 24 hr news cycle it’s a challenge to maintain perspective and patience.

Barr/Durham statements today should bring a calm among Q followers/lurkers/casual observers. The Left is imploding.

I ask myself often; why are they pushing impeachment so hard? I truly believe it’s the only card they have left. Desperation. They need a 2020 Whitehouse win, coupled with just enough “impeachment” smoke so their POTUS can hand out pardons like Halloween candy.