.@SenTedCruz
“The Democrats are now admitting that they can’t prove a crime, they can’t prove a law was violated, and here’s why. Any president, any administration, is justified in investigating corruption, and there was serious evidence of real corruption concerning Hunter....


.CNN is a ratings disaster. Lost all credibility!

So, I think today we are being told this means something!

3) We have a lot of Q post pictures with 64 character filenames...
a) It has been debated that these may hold hidden PIXELKNOT steganography messages... but we need the KEY to unlock and read them!


4) WHAT IF... the Tweet IDs of those Tweets starting with .@ are the KEY to the PIXELKNOT messages?

a) A period looks like a STONE; so a period providing the KEY gives us KEY+STONE!

b) Look again at the tweet starting .@ ... this a symbol of the (KEY)STONE next to the @ keyhole!


5) The number of tweets starting ".@" is about the same number as Q post picture filenames in hexadecimal or base-64!

If you start a twitter thread @xxxxxxxx only that individual will see that tweet (unless a person visits your replies section, which is fairly rare). So people have implemented a . before the @ to make the tweet appear in their public feed. I don't think it's anything more than that. But it would be simple to find out. How many tweets has trump started .@ vs just a regular @? If it's almost exclusively .@ then there's nothing to it imo.
edit on 9-12-2019 by Dfairlite because: (no reason given)

Interesting... you may be onto something then.


To decode stenography, you need to know what Steno Program was used to create the embedded message.

Once you know that, it is just a matter (more or less) of starting the program, linking to the pic and enter the passphrase.

The first one 'Xiao Steganography' stood out for me.

6:38am here in UK, so it will have to wait until after some zeds.

posted on Dec, 9 2019 @ 12:41 AM
link
As part of my niche here, I try to think of parallels from history that relate to the Trump Era. Consider Gorbachev, taking weak control of a massively corrupt and morally vacant system. Lots of little "isms" with economics and freedoms seem to match up with these two diverse leaders, whose tasks are so similar; to free their respective countries. One big job of Gorbachev was to drain the swamp in Moskva, ironically.

History hasn't been kind to Gorbachev, but the results of his plan are pretty evident now; an improved country, and we have a strong leader in Putin whose mission is similar in continuing the progress. At a minimum, they are both personalities whom we can relate to.

Another Quirk of the Gorbachev Era was a serious coup attempt, which was shrugged off, resulting in the rapid demise of the old faction. The coup stood directly against openness, or "Glasnsot". All worth repeating for us who remember it, and a reminder for younger people here. The parallels are uncanny. I remember envious friends in the US lamenting that, "at least Russia had their revolution".

edit on 9-12-2019 by FlyingFox because: In hindsight, the "coup" could have been a false flag to enable Gorbachev to crash the Soviet system

posted on Dec, 9 2019 @ 01:13 AM
link
Now why would a Vice President of the United States be LIVID that the Ukraine government seized the assets of a Ukrainian corporation? A corrupt corporation named BURISMA.

Former SDNY Prosecutor Rudy Giuliani will be presenting the "WHY" to Congress and Attorney General Bill Barr, upon return from his Ukraine fact finding and evidence gathering trip.

Here's why Joe Biden was LIVID, direct from the horse's mouth.
theconservativetreehouse.com... on/
edit on 12/9/2019 by carewemust because: (no reason given)

posted on Dec, 9 2019 @ 02:10 AM
link
Sunday Night, A.G. Barr declassified something related to "alleged" Dossier author Christopher Steele. I'm not a NYT subscriber, so I couldn't see the entire article. But for those of you who are subscribers, here's the article link.

It's all an internal sectarian conflict among followers of an obscure Near Eastern Moon God, the Antinomian faction versus the Legalists, both equally retarded.

posted on Dec, 9 2019 @ 03:35 AM
link
a reply to: carewemust
I'm not a subscriber but I was able to read the whole article while a pop up floated asking if I wanted to continue with my gmail account.

All I saw was word salad with a side of fluff.

Guess peeps will have to wait to see what was actually authorized for release.

If you put all the Ukraine pieces together, does it look like this: 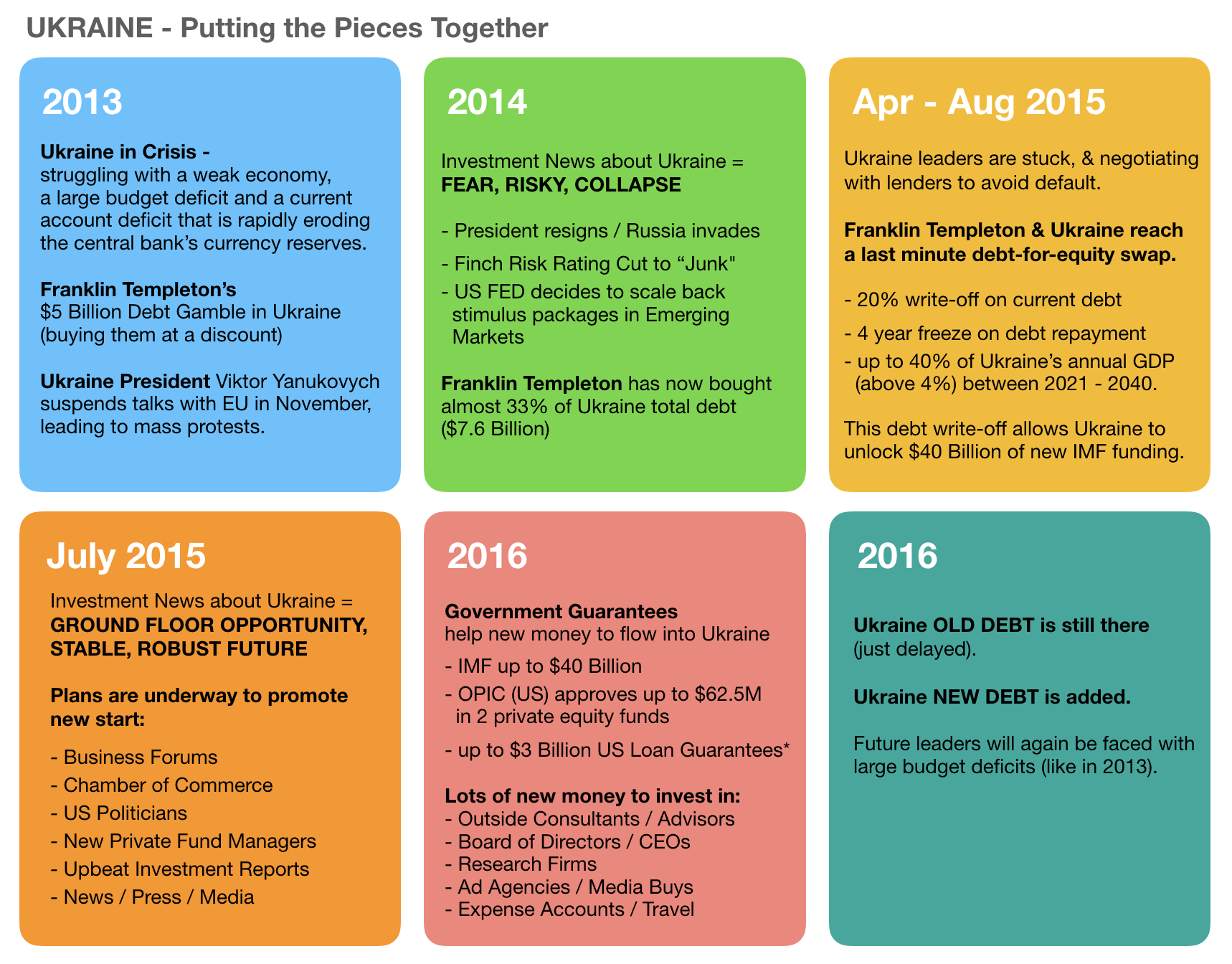 I think a piece often forgotten is what the original "EU economic initiative" was all about. My take is that it was meant to be a bonanza for the wealthy elites of Germany. The "initiative" was wrapped in the EU flag because that presented much better optics than a "German initiative in Ukraine", which would still carry a lot of emotional baggage for anyone in the territory of the former Soviet Union.

This German bid for a big piece of the economic pie was at cross purposes with whatever the U.S. government was doing there at the time, thus Nuland's overheard unpleasant invective directed at the EU. Thus, the person who reacted to said invective was not any formal EU official ... but Merkel ... the German chancellor. For a brief moment, her mask slipped.

As to what has happened since ... not sure, but it looks like the EU got elbowed aside by the U.S. government as well as Putin's takeover of the Crimea and support of the pro-Russian combatant groups in eastern Ukraine.

How the CIA, Mossad and “the Epstein Network” Are Exploiting Mass Shootings to Create an Orwellian Nightmare

Following the arrest and subsequent death in prison of alleged child sex trafficker Jeffrey Epstein, a little-known Israeli tech company began to receive increased publicity, but for all the wrong reasons. Not long after Epstein’s arrest, and his relationships and finances came under scrutiny, it was revealed that the Israeli company Carbyne911 had received substantial funding from Jeffrey Epstein as well as Epstein’s close associate and former Prime Minister of Israel Ehud Barak, and Silicon Valley venture capitalist and prominent Trump backer Peter Thiel.....

......As this report will reveal, this database — often referred to as “Main Core” — was created with the involvement of Israeli intelligence and Israel remained involved years after it was developed, and potentially to the present. It was also used by at least one former CIA official on President Reagan’s National Security Council to blackmail members of Congress, Congressional staffers and journalists, among others.......

.....Yet, privacy concerns with Carbyne go beyond the company’s ties to Israeli intelligence and U.S. intelligence contractors like Peter Thiel. For instance, Carbyne’s smartphone app extracts the following information from the phones on which it is installed:

Device location, video live-streamed from the smartphone to the call center, text messages in a two-way chat window, any data from a user’s phone if they have the Carbyne app and ESInet, and any information that comes over a data link, which Carbyne opens in case the caller’s voice link drops out.” (emphasis added)

According to Carbyne’s website, this same information can also be obtained from any smartphone, even if it does not have Carbyne’s app installed, if that phone calls a 911 call center that uses Carbyne or merely any other number connected to Carbyne’s network.....

.....In this report, MintPress identifies dozens of former members of an elite Israeli military intelligence unit who now hold top positions at Microsoft, Google and Facebook.........

For Lyrics only LoL


Harvey highlighted the winner of the national costume contest. After showing a photo of Miss Philippines Gazini Ganados in costume and declaring her the winner, Harvey then said, "This is it right here," and introduced the contestant beside him, who was very clearly in a different outfit than the one that was just shown on screen.


"It's not Philippines, it's Malaysia," contestant Shweta Sekhon said firmly. The Miss Universe Organization confirmed in a statement sent to USA TODAY that Harvey was correct and Miss Philippines Gazini Ganados is the winner of the 2019 National Costume competition.

Another teleprompter flub for Harvey. We all remember what happened last time he mixed up the contestants due to a teleprompter "flub".


"I have to apologize." Those are the words Miss Universe host Steve Harvey was forced to utter — and may regret for years to come — after mistakenly crowning Miss Colombia, Ariadna Gutierrez-Arévalo, as the winner of the 2015 beauty pageant. She wasn't.

posted on Dec, 9 2019 @ 10:26 AM
link
Incoming
Department of Justice Inspector General report examining the origins of the Russia probe has been transmitted to Congress & lawmakers and aides are now reviewing it

Adam Schiff Fails to Show Up at Impeachment Hearing