The Pensacola shooting was referenced by Q yesterday in this message: qmap.pub...

Nobody can keep up.😎

Are you saying MOS does not mean Mossad?

originally posted by: IAMTAT
bonginoreport.com...
...IS AN EXCELLENT New News Aggregate resource...a fitting replacement for the SOLD OUT Drudge Report.


Good for him 👍🏼 Considering all the nonsense he had to put up with he deserves all the success coming his way!

Senators, sitting Senators will vote to remove DJT from office because he colluded with the russ- wait, what? We'll they have a reason.

Accusation RE Ukraine: DJT called on Ukraine to dig up dirt on "political rival" in order to win the reelection. (contorted logic but...)

1. Must drop out the race entirely, as their vote can be seen as an effort to attack a political rival in order to secure a win through impeachment tactics.

2. Should recuse themselves from the proceedings ENTIRELY, as it appears they have in fact pushed for impeachment to further their chances and determined their vote PRIOR to Ukraine being the topic (applies to Harris) in public countless time. Amy K is not impartial, she's stated that.

What will happen? They will say the vote is too important for the "American People" and the are not conflicted. The press will say their actions are not self directed, but for the betterment of the world because something something...


This is very interesting, notice how the writer cannot even see the clear and irrefutable Conflict Of Interest. The only "concern" is the campaigns themselves.

A Disaster': Impeachment Could Sideline Senators In 2020 Presidential Campaign

Now, important to keep in mind, we the public and Anons in particular have seen the impeachMENT "evidence."

What most of the world but Anons have not seen is the horrors of Ukraine which will be dumped on the masses as evidence, in a Constitutionally protected forum, which if I am not mistaken can easily lead to criminal referrals in the US and more.


originally posted by: IAMTAT
bonginoreport.com...
...IS AN EXCELLENT New News Aggregate resource...a fitting replacement for the SOLD OUT Drudge Report.

Good for him 👍🏼 Considering all the nonsense he had to put up with he deserves all the success coming his way!

Bongino has been relentless, articulate and super energetic. Very impressive. 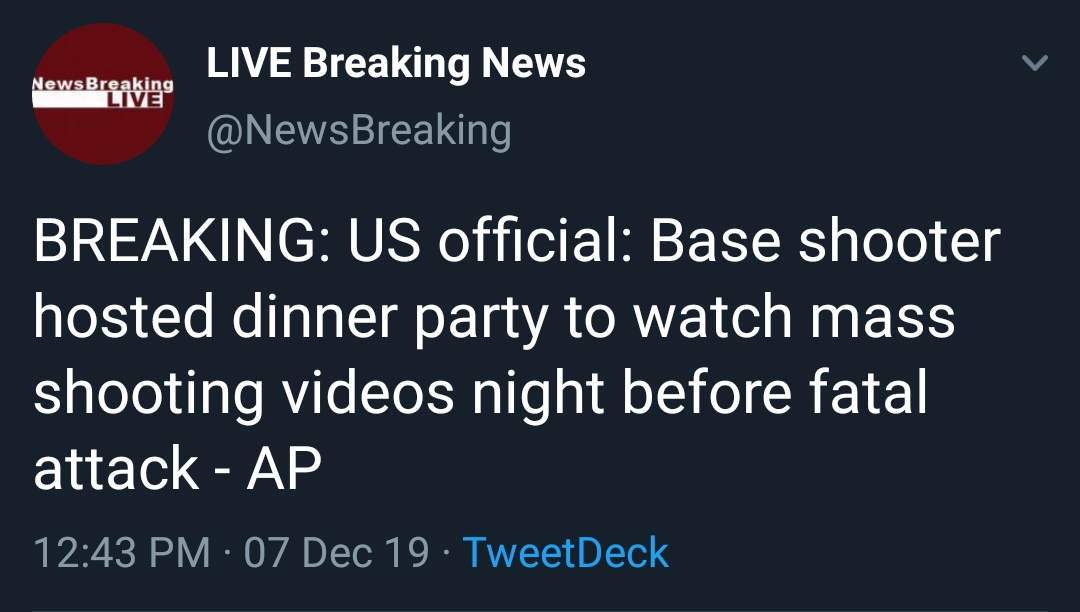 After watching this longer version for the first time today, I see WHY this 4min30sec version was removed by Google-YouTube. The last 2 minutes show how much AMERICA loves what President Trump is doing for our country.

If Google was a TV Network, it would be featured as a SWAMP creature in the video, right alongside CNN and MSNBC. 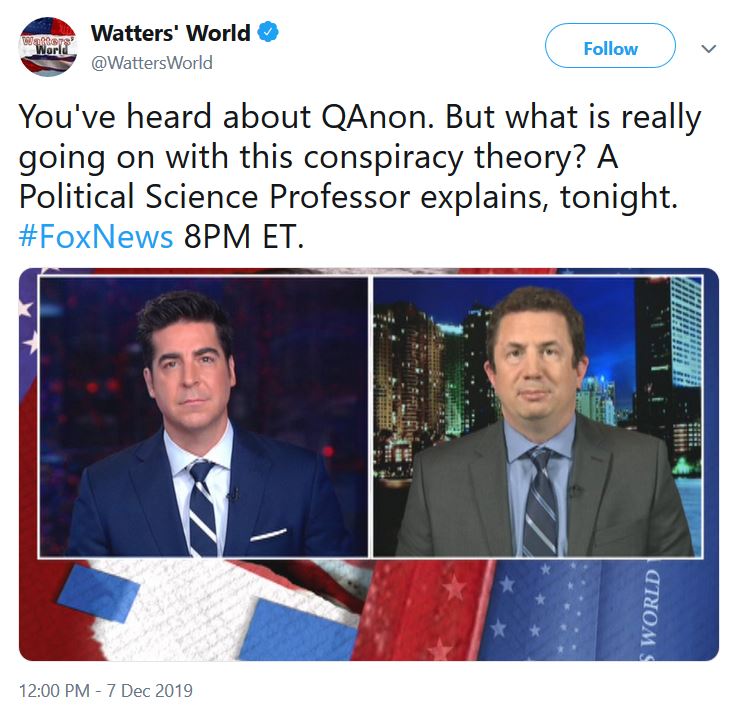 edit on Sat Dec 7 2019 by DontTreadOnMe because: RESTORED

8pm on a Saturday night....likely won't get too many viewers. I'll be watching though!

posted on Dec, 7 2019 @ 03:04 PM
link
This isn't connected to Q, but I just want to add my 2 cents considering all of the religion associated with these threads/Q.

As a non-believer myself I see this two different ways.

1. I do not identify as Atheist, never have and never will, nor Agnostic or anything else. I'm strictly a non-believer, and part of that reason is that I believe Atheism, these days, is a religion, and they act no different than those who are affiliated with a "real" religion, and thus I can see why they should be tax exempt.

2. I don't believe any churches should he tax exempt. I've never understood why, and maybe it did make sense back in the early 1900s when they implemented tax exemption for churches, but today they are all money hungry profiteers. In 2013 analysts claimed churches (all forms; temple, mosque, etc) cost taxpayers around $80 billion a year. Ridiculous.

I understand the article in question is Canada, but it's just as relevant in the US.

With all of that being said -- I'm all for gutting tax exempt status for all places of worship. It is not needed. $80b a year for what? They can sit there and read a book, supply their own translations of the text, and profit?

If not all places of worship, maybe just these "mega churches" and the scum that run them like Joel Olsteen. I can see how losing tax exempt status could hurt small, local community churches. I have a hard time understanding why people give their hard earned, taxed income, to these bastards "sinning" by way of Greed.

You give churches more than $82.5 billion a year

I mean..if we're supposed to be getting this country out of a downward spiral economically and financially -- why not start cutting funds and programs that really don't matter?

Q3604
Everything the Dems are doing was known ahead of time, and Q told us months ago.

Q is referring to the mass shooters as a manipulated event meant to distract from the “countdown” presented here in Q2681.

Which connects back to...


Jun 28 2018 17:19:24 (EST)
Law enforcement should interview the therapists.
Each shooter has one coincidentally.
Targets?
Relocation within 30 days of each shooting?
New name?
FBI doesn’t know this?
Spooks are hard to find?
Dream to reality.
Q

Moving forward to public research, if you look at this guy he has proved that the EMF of the brain interacts with the EMF of the earth and that information passes between the two and in fact can be picked up by a second mind (the resonant frequency of both the mind and the earth’s EMF is 7Hz).

Michael Persinger on No More Secrets: 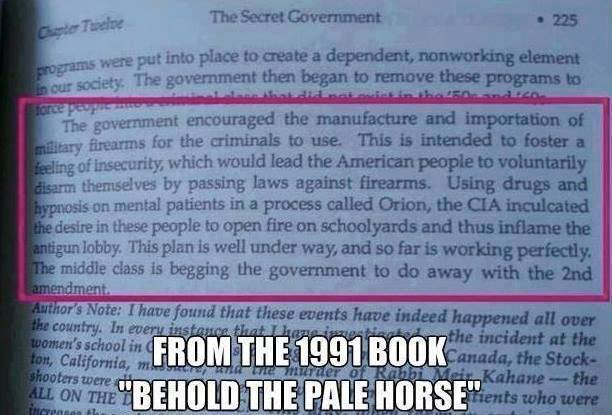 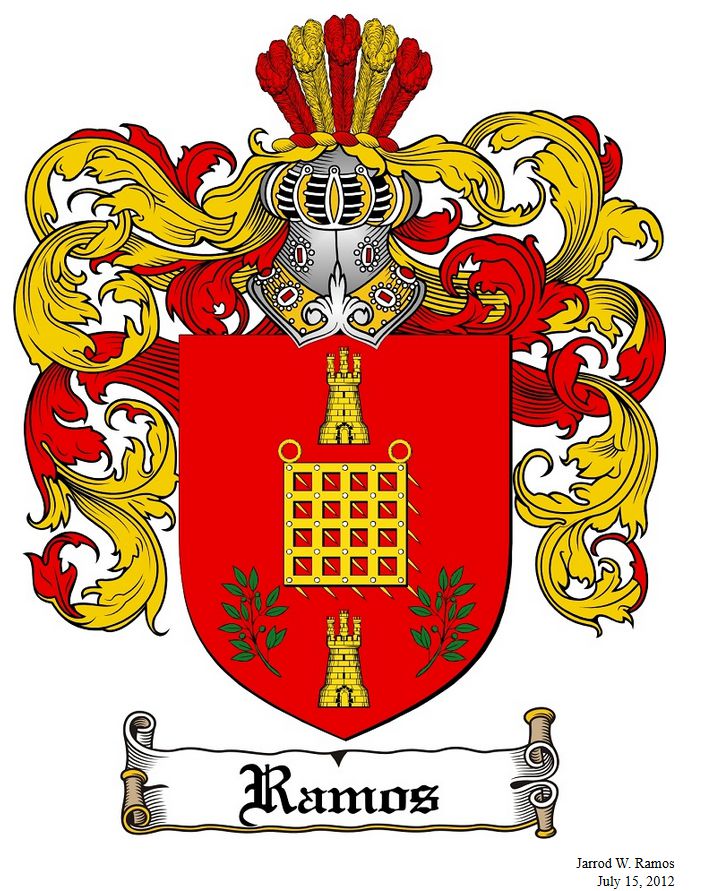 "The World ain’t what it seems is it Gunny...
“The moment you think you got it figured, you’re wrong”

Ty didn't see. Hard to keep up when things start to move.