posted on Nov, 12 2019 @ 06:08 PM
link
I don't believe folks are capable of thinking critically and pursuing the facts. I see all kinds of information stated boldly, very matter of fact and often combative in posts here. No citation, just bold claims and insults towards those who won't agree.

Is it ignorance? Fear? Are you trying to control the narrative? Or are your sources giving you opinion news (the answer is always yes). Hate had blinded the keyboard warriors.

I get it, trump is very orange, but I think hiding behind false words makes you yellow.

originally posted by: PhilbertDezineck
a reply to: Rob808
It's called opinion just like your post is your opinion. The mud pit is nothing but opinions. In my opinion. 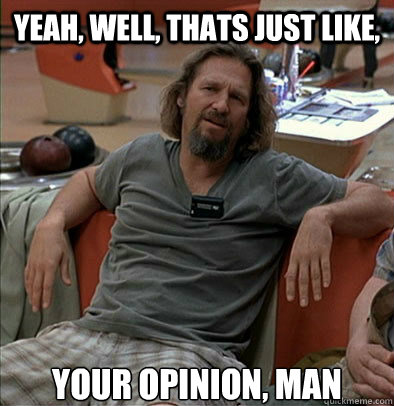 Like man, you know what they say about opinions every one has one just like everyone has an A-hole.... Man....

and I have to ask them back. Well

"whatta ya mean What do I mean?"

Then we just look at each other til it gets awkward.

originally posted by: CriticalStinker
a reply to: Rob808

Here is the problem.

I try to assume most people believe what they are saying. But there is all sorts of things creating noise between our messages.

Lack of context or relationships with each other, misunderstandings of what exactly we said, somoen being misinformed, a desire to "win" and argument, and so forth.

I am guilty of this as much as anyone.

But there are certainly trolls, pr people taht are so partisan that its impossible to have an honest conversation.

And sometimes its hard to tell the differnce.

So if I am discussing something with someone who disagree with me, and they call me names, or say im dumb, or call me a liar, or they say something that just isnt true, i really brush it off and can have more conversations with those people, because I know things get heated, as do i.

But here is where i start to winder if its worth having a conversation with people. (this is just a hypothetical, I have not had this particular conversation)

If you make a definitive statement, such as "Everyone politicians who refuses to release their taxes should be removed from office"

And I say ok, here is a politician from your party who refused to release their taxes, so you must agree they should be removed.

And you respond with "well that was ok my guy had good reasons to not release his taxes, so he shouldnt be removed"

I dont know how we can have any kind of honest conversation. It is clear that person is willing to shift anyb position they have to justify actions of people they like.

Thats just my thoughts on this.

posted on Nov, 12 2019 @ 07:02 PM
link
that's more than most. True, we speculate if facts aren't apparent... but too often opinion comes first, and weve collectively stopped the persuit of those facts to replace it with proving our opinions...

It's pretty impossible to get any facts through other's accounts of facts without witnessing said stories.
The best we can do is anal-eyes the gitus and draw our own conclusions.
Bring some facts for our schooling, or shut your pie-hole.

I'm gonna make like a tree and get out.

I believe most of my words.....it's the sentences and paragraphs that give me problems.