Project Veritas founder James O’Keefe on Monday teased a bombshell leak on deceased pedophile Jeffrey Epstein. O’Keefe said on Monday that it’s time to “raise the stakes” after his #ExposeCNN series. “A new insider has come to Project Veritas with secret recordings,” O’Keefe tweeted with a hashtag #EpsteinCoverup Project Veritas will be releasing the Epstein recordings Tuesday, November 5 at 9 AM ET. 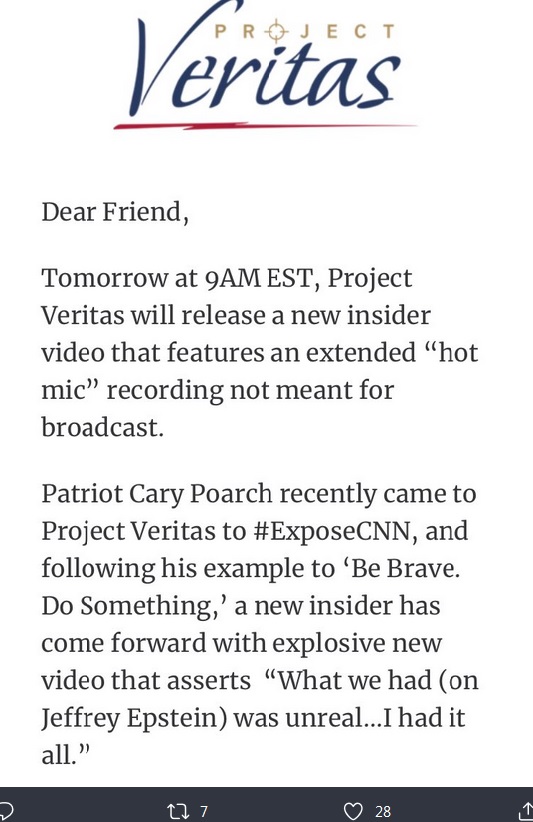 Here's a link to Twitter, showing a video of O'Keefe discussing the details on his breaking story.

Project Veritas founder and president James O'Keefe has stated that today, "we break the internet." He states an insider, with secret video footage, casts doubt, or proves, that Epstein's death was not a suicide.

Last week, well known pathologist Dr. Michael Baden, stated that the evidence points to homicide over suicide in Epstein’s prison death. Not surprisingly, the medical examiner who ruled Jeffrey Epstein’s death a suicide, has dismissed Baden's opinions and has stated that she stands behind her findings.

Here are a few links that will, more than likely, post this breaking story once it's released by Project Veratis at 9 AM:
twitter.com...
www.projectveritasaction.com...
www.whatfinger.com...

this promises to be juicy. I can hardly wait for it...

I guess it will be linked here as soon as available ?

Somehow...I'm starting to doubt that anything substantial will be released, but holding my breath.

People don't live where you do...all our times are different. What day, time zone, country?

Threads that say "now", "breaking", "today"....all means nothing if the reader doesn't see that thread for weeks, months...years, right?

Not holding my breath, either, but I am happy that it'll be released before I go to work. I do most of my reading in the early morning when I'm enjoying my coffee, anything I read up on or post on tends to be forgotten after a long work day. -_-

It will be peculiar if their internet suddenly goes out lol.
Or the CIA, FBI, NSA, etc... kindly interrupt's our scheduled program with a brief service announcement.

No kidding...It is mentioned on my thread that the story will break at 9 AM EST. Don't you know what EST means??

His post told you all that you should know.


Project Veritas will be releasing the Epstein recordings Tuesday, November 5 at 9 AM ET.

If you're unsure of what time that is in your time-zone then do what I do, google it. lol

What day? Where?:If I read this week's or months from now...you didn't take that into consideration

Or the CIA, FBI, NSA, etc... kindly interrupt's our scheduled program with a brief service announcement.

"This is a test of the Emergency Broadcast System. If Epstein really had killed himself ..."

originally posted by: MarioOnTheFly
I'm thinking now...hope it doesnt turn out to be a nothin' burger. Had a few of those lately.

Its what Project Veritas has become notorious for... all hype and no substance.

I know my timezone, but the poster didn't consider timezones and dates when someone might read this.

This organization is protected by Patriots.

Guessing it was the Dems what done it.

Jen Gennai, head of responsible innovation and global affairs at Google, wrote in a Medium post that members of James O’Keefe’s conservative group Project Veritas filmed her without her consent and “selectively edited” her words to make it seem like Google was influencing the 2020 election. Gennai called this nonsense and wrote that “I was explaining how Google’s Trust and Safety team is working to help prevent the types of online foreign interference that happened in 2016.”
www.thedailybeast.com...


Last October, ThinkProgress reported that Project Veritas had received a $10,000 donation in 2015 from Donald Trump’s controversial Donald J. Trump Foundation, a theoretically charitable 501(c)(3) organization. This reporting was based on a list of charitable payments provided by the foundation to the Washington Post.

But a ThinkProgress review of the Trump Foundation’s 2015 tax filing finds that it reported making not one but two $10,000 donations to Project Veritas in tax-year 2015.
thinkprogress.org...

posted on Nov, 5 2019 @ 07:31 AM
link
This is fantastic. Now if we we could only get a new global media company that would present it to the world.

Real tired of the mainstream media controlling the masses who can't think for themselves.

Imagine what would happen if they actually got a glimmer of reality.

originally posted by: mysterioustranger
What day? Where?:If I read this week's or months from now...you didn't take that into consideration

Really, dude?? Well, your mood states you're "introspective", so go sit down, clear your mind, look deep inside and ask yourself why you're having such trouble reading what the op wrote. Every single thing you want to know IS there.