posted on Nov, 4 2019 @ 04:31 AM
link
1) The British Mandate of Palestine was a mess from day one, by the Balfour Declaration they promised Palestine to the Jews but at the same time in an effort to win the First World War and get the Arabs fighting against the the Ottoman Empire, they also promised the land to Arabs, they were between a rock and a hard place when the newly formed League of Nations gave them Palestine to govern up to when elections could take place.
The mistake was made more difficult by appointing Sir Hubert Samuel as Commissioner and Commander in Chief of Palestine, which was seen as biased, the mandate was never going to work from this point!
The Mandate wasn't LEGAL until the Oath of Office took place which was in Jerusalem on 11th September 1922, information below:- 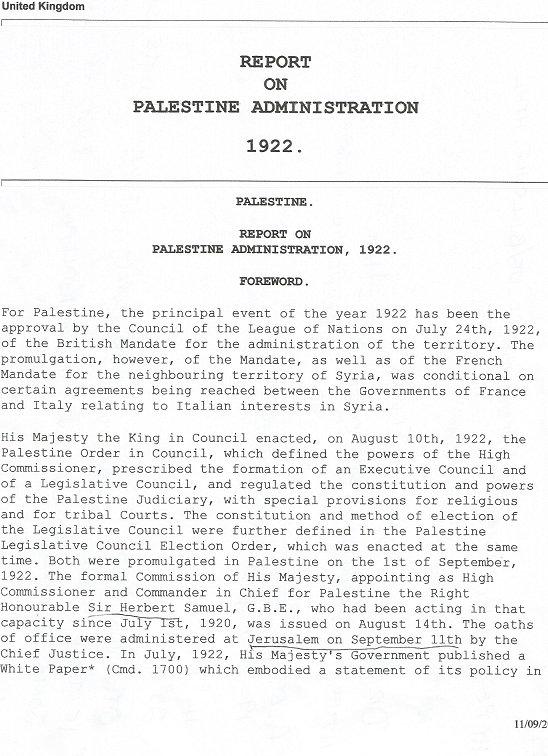 President Harry Truman was the first international leader to recognise the State of Israel, which was a sore point with Arab states.
2) The Millennium being a period of one thousand years was held on the wrong Year, the Julian Calendar that came before the Gregorian one had no year Zero, it went from 1 BC to 1 AD, therefore 2001 was the real Millennium.
Secret Societies that are Hermetic love Egyptian dates, the last remnant of the great ancient Egyptian Calendar is the Coptic Calendar, the symbolism is Sirius rising with the Sun, however because now it is attached to the Gregorian Calendar to stop drift, there isn't any where on Earth where Sirius, the Isis star rises with the Sun on 11th September, which is New Year in the Coptic Calendar, called 1st of Thout or Thoth, link below;-
en.wikipedia.org...

I effin hate that car!

originally posted by: UpIsNowDown
So 3000+ people were murdered because of the date? it was preplanned since before the second world war?

The dates that you give are non-applicable going back many centuries, New Year in the Coptic Calendar changes every two hundred years, in our era it is New Year on 11th September from 1900 to 2099, after which it changes to 12th September, please view link under "Coptic Year", so your big list of dates don't mean anything:-en.wikipedia.org...

Further more this wasn't planned from 1922, but probably only two years before attack, i will explain why in time.
I have no idea where Ford Pintos become a topic of this thread?

But honestly, it was in the works for a long time and doubt the date had anything to do with it...
I still have the memory of me tuning in to watch some Pokémon as an 8-year old and watching the planes fly into the WTC’s instead.

posted on Nov, 4 2019 @ 08:22 AM
link
a reply to: GreenGunther,
You don't think i would be crazy enough to base my thesis on one date in 1922 do you????
One of the last serious attempt to create peace in Palestine was the Sharm el Sheikh Memorandum, please scroll down link to "8 Security", where this was signed on 4th September 1999, however came into effect one week after signing, making it 11th September 1999.
Like all other peace agreements, this didn't work, so someone got impatient with the on going process:-
avalon.law.yale.edu...

originally posted by: Astronomer62
i will explain why in time.

Then I will have to wait patiently for the truth, sorry for any assumptions I made on only half of your given evidence.

I have no alternative theory which is better than yours other than it was money motivated.

As for Septmeber the 12th, I suppose this event is of similar ilk

Important Events From This day in History September 12th

12 Sept, 1970 - Jordan Plane Hijack 1970 : Palestinian Guerrillas who have hijacked three aircraft in the desert, today blew up those aircraft at the airstrip, but stated the passengers were removed first so are still safe.

posted on Nov, 4 2019 @ 08:54 AM
link
a reply to: UpIsNowDown
Thank you, i will explain my thesis in full given time, please note i'm slow as i'm very badly disabled and in pain, i also suffer from paraplegia.
When we think that The Pentagon was attacked on 11th September 2001, it becomes interesting that its "Ground Breaking Ceremony" was on 11th September 1941, exactly 60 years previously, link below:-
Hermetic Secret Societies are usually present regarding these ceremonies, so is looking suspicious. I might not be back till tomorrow:-
en.wikipedia.org...

My belief as there are only 365 days in any single year and as we have such a long history now, many events have taken place on the same day

While we may disagree, I admire your ability to provide a theory, I hope my posts do not prevent you from providing the rest of your theory in your own time.

My theory? Based on the day of Jezreel prophecy of Hosea and Romans 11.

In the prophecy it was predicted that Israel and Judah were to face a long term Leviticus 26 curse. But in Hosea 6-2 the prophecy has a timeline. 3 days in the presence of the Lord which according to 2nd Peter 3-8 and Psalms 90 to be 1000 year periods of time.

Then the question becomes why? And it appears the reason is in the book of Malachi. That Elijah the Prophet was to appear before the day of the Lord or a curse was to strike the Earth.

So I would propose this. We're currently in a botched Apocalypse. It was supposedly going to complete in the first century AD but with the death of John the Baptist it got a 2000 year extension. It never actually ended and the 70 week of Daniel 9 still has yet to happen. And will happen at the end of the curse.

Now Romans 11 figures into this because if you read it now with the knowledge of the curse it's really quite obvious that Paul was fully aware of the curse. So my theory is this. At the upper levels of Christianity they always been aware of the curse and have been working behind the scenes 100 years or so to bring about the end of it.

As far as your 9-11 theory goes I would suggest reading the book of Daniel chapters 8 and 11. If you were going to create an Apocalypse and Daniel gives you a roadmap to one then might you just follow it?

posted on Nov, 4 2019 @ 09:47 AM
link
a reply to: UpIsNowDown
I enjoy your posts and i agree with you about dates, however my name isn't in jest for i'm an archaeoastronomer i study strange beliefs in the stars and the location is crucial to event, probably so you are up to date with this you could read about the Olympics and how they are aligned to the stars, being in the Hermetic tradition using Alnilam, Belt of Orion and Osiris star and the Isis star Sirius, there are four pages and so far i'm over half way through, just starting on the 1960 Olympic games, i have to finish with the 1896 first modern games:-
www.abovetopsecret.com...
I have to say that all dates already mentioned in this thread ARE ALIGNED THE SAME WAY, which i will show in time, but the alignment wouldn't happen if at another location, so are intentional!

Um...no. It was chosen as relating to our 911 Emergency call # in America. In other words its a cute reference they thought..."Emergency!Emergency!Wake up America! Call 911!"

posted on Nov, 4 2019 @ 11:23 AM
link
Numbers based on the Satanic calendar... Most world events revolve around their numbers... Gematria also...a reply to: mysterioustranger

posted on Nov, 4 2019 @ 11:43 AM
link
a reply to: Bigbrooklyn#
Yes secret societies were involved at different levels however following known facts it isn't impossible to think that the main cause of 9/11 was the Palestine problem.
The main ringleader on the day was Mohamed Atta, who was born in Egypt:-
en.wikipedia.org...
Egypt at the time had a constitution adopted on 11th September 1971:-
en.wikipedia.org...

posted on Nov, 4 2019 @ 12:24 PM
link
Lets try a joke, if you wanted to get rid of a Pharaoh or a King of Egypt, what day would you choose?
The ancient Egyptians used Sunrise as the start of the day, so we could use sunrise!
The Ancient Egyptians used a calendar that is alleged started with Sirius rising with the Sun or being the Heliacal rising star, a lot of mystery schools believe this, and Isis is believed to be the Star Sirius.
Nasser wanted to overthrow King Farouk in the Revolution of 1952, Government was in and still is in Cairo, so we could pick that location, so did Nasser pick the day by astrological observations?
en.wikipedia.org...
On that day and location, Sirius rose with the Sun along the horizon in the East, make up your own mind, indeed we don't have to go back too far to know that states used to employ astrologers to pick days for war!
Astronomy graph below, it is accurate:- 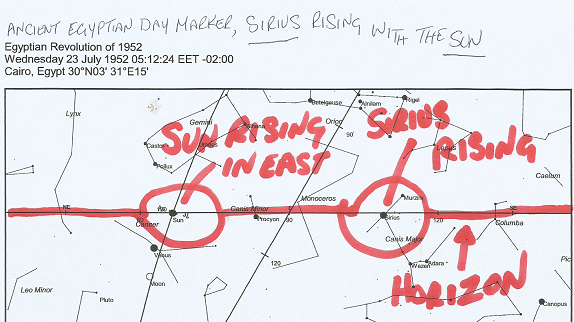 when a Kite Playing/Plane Must Hit Steel

posted on Nov, 5 2019 @ 03:14 AM
link
a reply to: letni
Soon i will show the astronomical observations of New York on 11th September 2001, although symbolic of Sirius rising with the Sun, these days there isn't anywhere this happens, but you can get an alignment to Alnilam, Belt of Orion, which within ancient Egyptian beliefs is Osiris!
The observations i use are the oldest astrological practice going back to at least 1,300 BC, please note i don't believe in astrology, i'm only showing that some people pick days that they believe will help them in their actions due to belief in astrology.

Not all Freemasonry believe that Freemasonry started in Israel, including the Hiram Abiff legend
en.wikipedia.org...

The more esoteric Freemasons believe more in the Regius document that explains that they started in ancient Egypt:-
milwaukeefreemasonryformenandwomen.com...

posted on Nov, 5 2019 @ 06:10 AM
link
a reply to: Astronomer62
There are some alignments you can checkout, one is on January 1st at midnight, but you will need an APP on your phone to show you Due or True South, no need to get it yet as you need to be in the right location.
www.youtube.com...