Moon Visible High in Sky for both So Cal & So Africa - Simultaneously!

posted on Oct, 28 2019 @ 05:00 PM
link
Was chatting with former colleague who is now back in S Africa and the subject of full moons came up, since its Halloweentime and now even there they are increasingly observing it.

Well what they're also apparently observing is the MOON high in the sky the at the same moment as the opposite 'side' of Earth here in socal.

From what I remembered thus explained was that the moon is visible in the daytime 'JUST AS MUCH' as the nighttime, but brightest in sky after full moon which for us (wherever on Earth?) was around the 13th October, but yea it was weird that we can see the moon high in the sky SIMULTANEOUSLY! I mean, it was night for me and lunchtime for her, so so much for the earth making a full spin every 24hours!

I wonder, does it have to do with Earth being supposedly tilted 23degree and/or opposite hemispheres, sides, and/or whatever? Or???
edit on 28-10-2019 by letni because: (no reason given)

Easy answer is that because the moon orbits around the equator it can be seen most days of the lunar cycle for roughly 6 hours during the daytime.

Your 6 hours will overlap someone else's nighttime viewing. Southern California isn't the exact antipodes of South Africa so it's bound to happen.

posted on Oct, 28 2019 @ 05:53 PM
link
Lookin at the globe seems to be if u put a stick thru it perpendicular thru socal it would come out around southern africa, but yea antipodes not my expertise, thanks,

When does it change to ST?

Where are you getting this 12 hours time difference? It’s only 9 hours between California and South Africa

And according to Stellarium, the moon is well below the horizon in South Africa at midnight.

You can confirm for yourself.

Sometimes doing instead of asking can be a learning experience.

Southern Cal antipodes is somewhere east of Madagascar. Even a 180 degree doesn't mean it isn't possible because of atmospheric refraction making the moon appear much higher than it is.

I'm also questioning if your friend was seeing any moon tonight since we are in a new moon phase and she would not have thought it was anywhere near full.

This is something i observed many years ago too. Seeing the moon in daytime at around noon and always wondered how that works if you live at the direct other side of the earth and able to see the moon at night aswell. I always considered the explanation too complex for me to understand.

posted on Oct, 28 2019 @ 06:21 PM
link
Get a ball to simulate Earth and pick a spot somewhere to be the moon location. You could also mark a couple of spots on the ball. Then turn the ball and watch.

The movement of the moon around Earth adds about an hour a day to the rise time.

It is possible for people on opposite sides of the earth to see the moon at the same time, the moon just has to be in the right spot and at the right distance, the further away the better.

The Moon is full when it is opposite the Sun. For this reason a truly full Moon is not visible between sunrise and sunset. It rises when the sun sets and sets when the sun rises.

I mean, it was night for me and lunchtime for her, so so much for the earth making a full spin every 24hours!

She eats lunch at midnight her time?


I wonder, does it have to do with Earth being supposedly tilted 23degree and/or opposite hemispheres, sides, and/or whatever? Or???

Whatever. But the Earth is round. That has something to do with it. 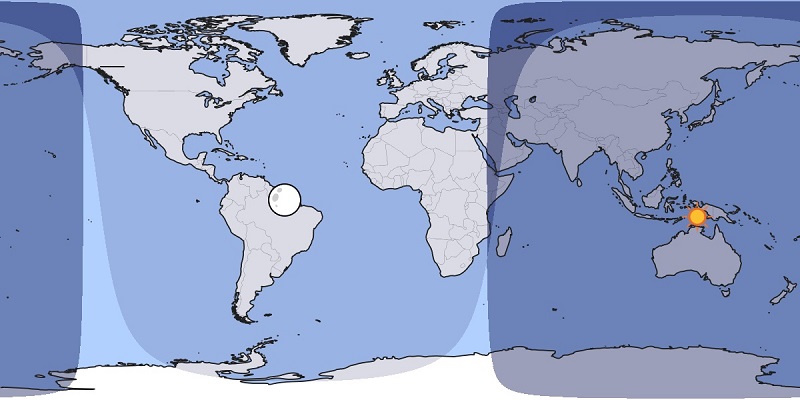 posted on Oct, 29 2019 @ 02:44 AM
link
Stellarium tells me that at midnight in South Africa the moon was well below the horizon, and in California at the same tim it was relatively low in the sky, new, and would have been obscured by the sun lower down in the sky.

Neither of you were looking at a full moon high in the sky.


Neither of you were looking at a full moon high in the sky.

That would depend on the definition of "high."