Does Boeing use Recycled Aircraft Parts on New Planes??

Take a look at the following picture: 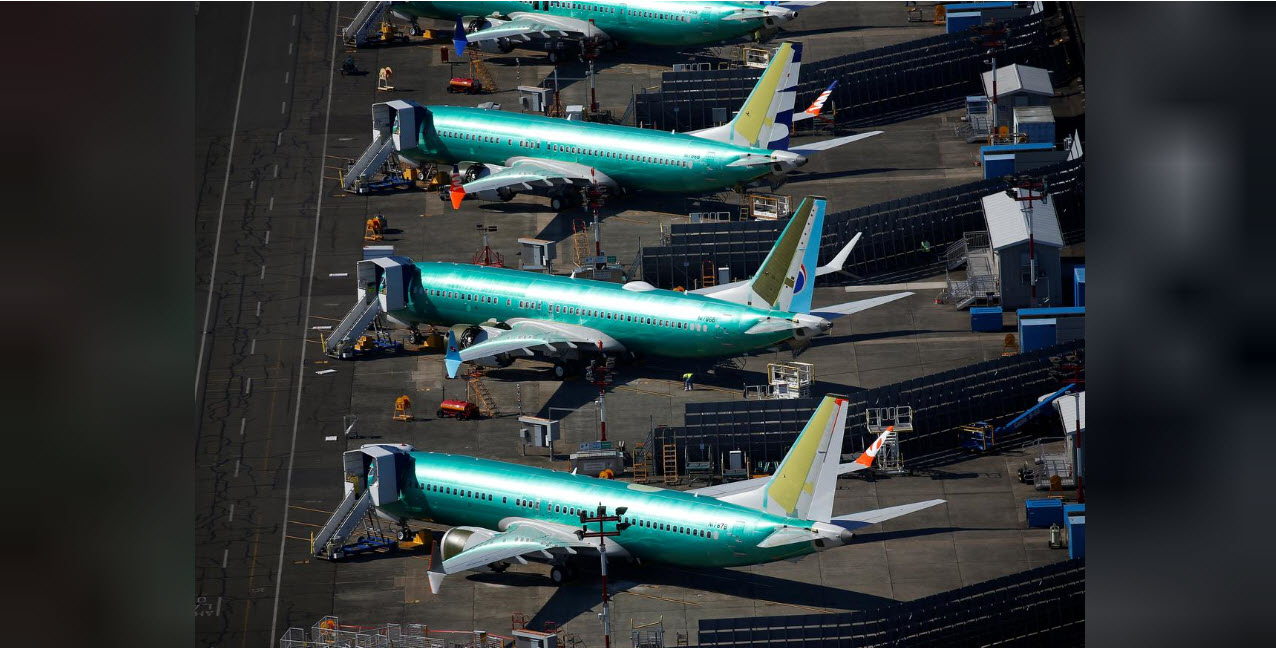 I could swear I see some KAL, JAL parts, possibly some Virgin parts and a couple other airline liveries.

These are all brand new 737 MAX aircraft before painting.

You mean the rudder and winglets? It's a dual purpose. It helps identify the airline before paint and it is a lot easier to balance the rudder if it's painted while off the aircraft.
edit on 10/19/2019 by Zaphod58 because: (no reason given)

Having worked for Boeing in the past, the only way they use used parts would be if the customer opted in to a program like that, which was unheard of or rare when I worked there, but the customer can do it if they want, assuming all the parts conform to FAA certs of course. Could be other reasons why the airline names are on those however and not used parts.

They wouldn't know this from a thousand other ways, like hull number, RFID, serial numbers, transponders, etc.???

They have to put the livery paint on them to keep track of who's aircraft it is?

Well, Boeing is planning to recycle carbon fiber from aircraft like the Dreamliner, but I don't know if they've done any of it yet. I read about this yesterday when I saw this picture.

See my edit. It's also for balancing the rudder.

As for identifying the airline, yes, there are multiple other ways, but I've seen people walk up to an aircraft that was clearly marked and get ready to do something that was supposed to be done on another aircraft. It's helpful to have multiple identification methods, including a bit of livery. Never underestimate the ability of people to screw up something that should be easy.
edit on 10/19/2019 by Zaphod58 because: (no reason given)

What about the other panels in front of the rudder on the stab?

If the weight of the paint was so important to the balancing of the rudder, this would seem to be even more important when repainting. Wouldn't it?

Once the rudder is attached, if the logo is going to extend onto the rudder they'll paint part or all of the vertical fin to line the paint up. It's easier to paint before installation in that case. It's just an aesthetic thing.

You don't have to remove it to balance it after it's installed. They have ways to check the balance after installation. For the initial balancing it's important though.

Seems like just plain white would be cheaper...and Boeing is all about being cheaper now.

Why go to the expense of doing all the graphics layout?

Does Boeing paint the initial buyer livery on the whole aircraft, or does the airline do this?

The green on the fuselage is an anti corrosion coating. It's sprayed off and primer applied, then painted. The rudder and winglets are painted by the manufacturer of the component before it's shipped to Boeing. The aircraft itself is painted by Boeing as part of the process. They usual perform the first flight with a Boeing crew before its painted, then after all the testing is done it goes through paint, and the airline comes in with their crew and does their acceptance flight and goes over the aircraft. Then they have the formal delivery ceremony if everything checks.

On the 787-9 that have the HLFC on them, the entire vertical fin had to be painted before installation. That allowed them to ensure the doors of the system were free and clear and working.

Did you see this

Yes, actually I did. And, I was just getting ready to post a thread about it.

Zaphod has done a good job answering my questions, but my disdain for the MAX remains.

Boeing "knew" about this problem, they "knew"!! They tried to cover it up and several hundred people died as a result. Some might say it's a training issue, but it's not and their Chief Technical Pilot said as much.

This is beyond shameful, it's criminal. And Boeing is not the only defendant, so is the FAA for certifying the plane! And so are the airlines for demanding faster, cheaper, cheaper and cheaper! The victims? The victims are the traveling public, and some people in this debacle need to be behind federal penitentiary bars! Until they are, I will continue my crusade against this broken and terrible aircraft.

The only thing the 737 MAX was designed to do was "minimize" passenger comfort and convenience while "MAXIMIZING" Boeing's, and ,profits and filling the pockets of regulators!!! And, several hundred people died because of it!

I'm gonna guess the answer is "of course they do."


Remember their BS with the 737 MAX (is that the right number?) and the "same" system as the prior 737s? To save from having to go through all the rigamarole and training for a different model (which it rely is basically, right?) and then they forced themselves to nosedive into the ground? If it saves Boeing some money, they'll do it, who cares if it isn't the plane they claim it to be (new not used parts) or costs several hundred innocent lives.

No, they don't. New aircraft are produced with new parts. The only way recycled parts are used is at the request of the people buying the aircraft, if they really want to keep purchase costs down. The problem with using recycled parts is that you tend to end up with having to fix them or replace them much sooner than if you get a new aircraft with new parts. Parts on aircraft are limited to cycles, so if you buy a part that is limited to 25,000 cycles, and it came from an aircraft with 20,000 cycles on it, that only leaves you 5,000 left before you're spending the money to replace it. A manufacturer that costs an airline that much money isn't going to sell aircraft for very long.
edit on 10/19/2019 by Zaphod58 because: (no reason given)

Yes, they sure do, and that picture really says it all. Don’t forget, there are even cases where they reuse parts from planes that have crashed!
In the case of Eastern Air Lines Flight 401, many parts were “cannibalized” and reused on other aircraft. It came to the public’s attention due to the ghost sightings reported on the aircraft that had received parts. The negative press (and lawsuits) made the company announce they were removing any donor parts from Flight 401 from their fleet.
edit on 10/20/2019 by Gumshoe because: (no reason given)

The airline recycled and reused those parts. Eastern 401 was a Lockheed L1011, so Boeing wouldn't be recycling parts for it.

As for the picture, the painted parts were painted before delivery to Boeing for installation.