Brexit Delayed. Another defeat for Johnson

Tune and a half.

Favorite song from my favorite band...

So happy I got to catch them on the division bell tour.

Guess these private educational establishments Boris and his ilk attended are not up to much after all?


Why should he sign it, when he has said this to The EU.


Earlier, Mr Johnson rang European leaders, including Mr Tusk, to insist that the letter "is Parliament's letter, not my letter"

All the private money and contracts that were shelled out on schools/hospitals is colossal , one of my friends in IT explained how a £ 300 laptop TO BUY is rented over a contract that costs £ 4000 , it is in the hundreds of billions over 30 years for the rental of these things and contracts and that is just hospitals !
edit on 19/10/2019 by stonerwilliam because: (no reason given)

School must be really different now or down South. LoL

It's not rocket science put it that way.

Knowing how to sign a letter is an important skill for mastering business documents as well as personal, friendly, or even intimate letters.

Not doing so says quite a bit as Boris plainly kens just fine.

posted on Oct, 19 2019 @ 05:11 PM
link
a reply to: andy06shake
It's a red herring, perhaps a deliberate one to get them chasing after the irrelevant. The response of the EU leadership is not genuinely going to depend on whether the letter is signed or not. They will reply to an unsigned one or ignore a signed one if it suits their purposes.

Did you miss this bit ?


Earlier, Mr Johnson rang European leaders, including Mr Tusk, to insist that the letter "is Parliament's letter, not my letter

Do you usually sign a letter that is not yours ?

So who wrote the letter?

And why is he sending letters that are not his own, or on his behalf?

It's not a permission slip alldaylong or a Doctors note ffs.
edit on 19-10-2019 by andy06shake because: (no reason given)


And why is he sending letters that are not his own?

He would have been within his right to ask every MP who voted for The Benn Act to actually sign it.

So it's not just a toys out the pram attempt at Boris levity and discombobulation?

I thought the letter was on behalf of the ruling government of which Boris is supposed to be the head honcho?

Even if he has only won one vote in Parliament since his arrival.

Nothing to do with the fact that he said he would rather be dead in a ditch than go back to the EU cap in hand?
edit on 19-10-2019 by andy06shake because: (no reason given)

Top of the morning to ya.

Do you actually have anything positive to add to this discussion apart from constantly sneering at boris?
Get a grip man.

What positive things would you have me say oldcarpy?

Where is the positivity in putting forward and tabling a deal that he knew would fail in parliament?

Im positive that Boris is a complete and utter Tory bastard of the first order, out to line his own, and people just like hims pockets.

Ile get a grip, when the politicians and Boris start to make a modicum of sense, so no time soon. 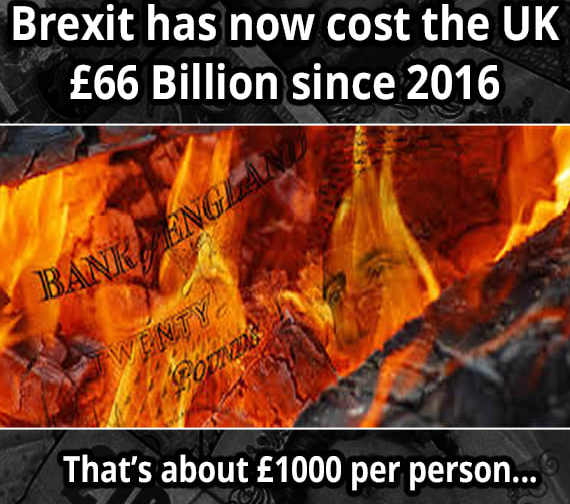 originally posted by: andy06shake
a reply to: DISRAELI

£66b yet the losing remoaners insist on dragging it out longer and costing more, they are responsible for a huge chunk if that cost if genuine.

Where does it stop, coz far as i can establish Boris don't ken nor care. x

Even on the side of the imaginary box buses he paints in his nut.


£66b yet the losing remoaners insist on dragging it out longer and costing more, they are responsible for a huge chunk if that cost if genuine.


Exactly , they've no care for what they're doing to the country just desperate to get their own way regardless of what it costs , history will judge them.

posted on Oct, 20 2019 @ 04:21 AM
link
In the face of seemingly insurmountable odds Michael Gove has said the UK will still leave the EU by 31st October.


Minister Michael Gove has insisted the UK will still leave the EU by 31 October, despite a government letter sent to Brussels asking for a delay.

Boris Johnson sent the letter - unsigned - after a major setback in the Commons to his Brexit strategy.

But the request was accompanied by a second letter, signed by the PM, saying he believed a delay would be a mistake.

Mr Gove told Sky News the government still had "the means and ability" to leave on 31 October.
www.bbc.co.uk...


It's probably just an extension of the brinkmanship being played out in the UK and EU Parliaments at the moment but in just 11 days we will know for sure , Escape to Victory or remain trapped in the bog of eternal stench.


The PM has also sent a separate note to Mr Tusk, obtained by Sky News, in which he urged the EU not to grant the extension.
Warning that pushing the deadline back would be "deeply corrosive", Mr Johnson wrote: "I have made clear since becoming prime minister, and made clear to parliament again today, my view, and the government's position, that a further extension would damage the interests of the UK and our EU partners, and the relationship between us."
news.sky.com...

Boris Johnson deliberately did not sign the letter he sent to the President of the European Council. Moreover he sent with it letters saying that he did not want an extension. That was not out of pique. It was part of a ploy because he knows that the unsigned letter has no legal force and therefore cannot be legally acted upon. Some people say that, as the letter was a UK government letter, it makes no difference that no signature was attached to it. I beg to differ. A letter is surely only a piece of paper until it has been signed with a valid signature. I think there is a trick up Boris' sleeve that he intends to pull at some stage if he needs to do. And Robert Peston agrees with me (here, saying that Boris is effectively saying "see me in court"). As the letter is unsigned, all he has sent is a sheet of paper with the appropriate section of the Benn Act printed out on it. Having an official letterhead on it and being sent by a government courier does not of itself make the document a legal request by the government. That surely, surely, requires signatures on government stationery. It only takes one leader of an EU country to question the legality of granting an extension to a country that has not legally asked for it (and, as far as I am concerned, that is the case here, as the Benn Act does not, of itself, amount to a legal request) and he will have a reason to veto the extension on the grounds that it has not been legally requested. The President of the European Council can bleat all he likes about granting an extension as he sips too many of his customary aperitifs. It doesn't matter because he does not have the legal power to grant it. It is not a done deal until all member states have voted.

And only one member state is needed to object to the illegality of the request (letter unsigned, sender not actually wanting it!) and to veto it for this reason. You cannot undo a legal decision of the Council, because European law trumps British law unfortunately or fortunately as it may be. So it may then be too late for there to be a legal flurry in which the Speaker of the House sends a copy of the wretched letter signed by himself to the EU. Or, if some Remainers try to challenge the veto in court, the UK government can say that the Speaker of the House does not speak for the British government (how well we now know that!) and that his letter does not amount to a legal request for an extension because it has not been sanctioned by anyone within the British government. Time, anyway, would likely run out for such legal manoevres.

Has Boris just left a "get out of jail" card for the government if it needs it? By that, I mean, if a group of bloody-minded Remainer MPS try to stop a piece of government legislation on the new EU deal, thinking that there is no hard Brexit to worry about anymore, they may get a nasty surprise that the October 31 date still applies because the extension granted by the EU was illegal, being based upon a piece of paper rather than a properly delivered and legal request....

originally posted by: micpsi
It was part of a ploy because he knows that the unsigned letter has no legal force and therefore cannot be legally acted upon.


I agree that it's a ploy, but for a different (or perhaps an additional) reason. One key point is that he deliberately advertised the absence of signature. If he was being really sneaky, he could have left it unsigned and kept quiet about the fact. Why advertise? Because he WANTS the opposition to react with indignation. It's a winding-up exercise, like Donald Trump's tweeting. Reacting with indignation, they spend their mental energies (and money) on forcing him to add a signature- which cannot alter the fact that his intended message has already been heard by the EU leaders by a variety of routes. This distracts them from spending their mental energies on more practical matters like forcing him to accept any extension offered.