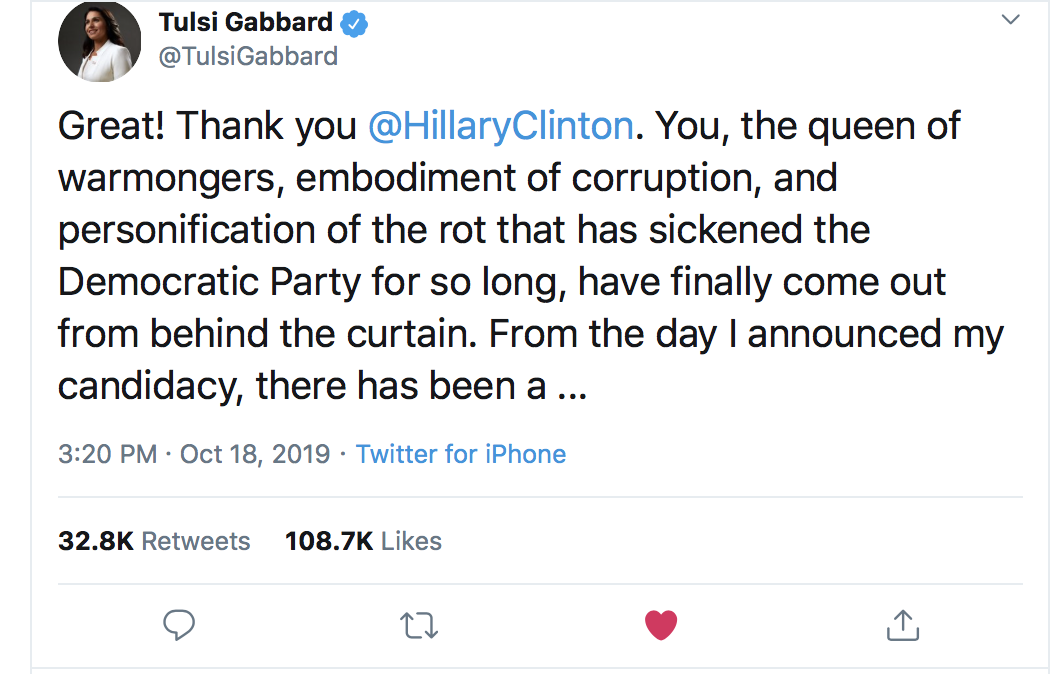 Mostly, I just dig the fact that a Democrat finally stated the truth and nothing but the whole truth about Hillary Clinton and the DNC. Not to mention the fake news arm of deep-state propaganda.

She took out Kamala like that. They better leave well enough alone with her...she ain't got nothing to lose and everything to gain. I sense this is gonna get even better.

And dont forget shes a Putin paid stooge. Russians keep buying all our politicians. Luckily we still have people with impeccable morals like Hillary.

Glad to see this and hopefully the democrats wake up and see how their party has been hijacked .

However i cant get behind her for the simple fact she is promoting the idiotic democrat principles of giving more money and more power to a bunch of politicians riddled with conflict of interest and expecting them to fix things for the people.

Its like giving the mob more money and power and expecting them to fix crime in your city. Its idiotic.

On that joe rogan interview she came accross to me as scripted and having nothing to offer but the fact she was in the military. While i appreciate and admire her service that shouldnt be a factor , as we have seen with mcstain and many other political scumbags.

I could take her seriously if she would stop talking about fixing things by giving a corrupt govt more power and money t
and became a one issue candidate focused solely on minimizing confict of interest in politics.

originally posted by: The GUT
a reply to: interupt42

posted on Oct, 18 2019 @ 10:37 PM
link
She’s the only thing going in the Democrat Party that’s even close to resembling a voice of reason. I don’t agree with some of her policies but she does seem to be someone that would be willing to work with others in a bipartisan manner in order to reach resolutions to issues that are important to the citizens of our country.

posted on Oct, 18 2019 @ 10:46 PM
link
the only bipartisan thing that has been getting done is criminal activity that steals money from taxpayers. Trump is the best we are going to get like it or not. He is actually undoing a lot of this nonsense.

posted on Oct, 18 2019 @ 11:21 PM
link
Tulsi has a tough job coming up. Trump has been trying to lock Hillary up for a while, but she has been to well entrenched and protected by the systems put in place by Obama. The Special Executive Services have been stonewalling any real investigations into corruption and rather trying to blame it all on Trump. The media is on board with this program with its fake news and false allegations. Lockheed and Raytheon have their profits at stake with a foreign policy directed towards peace.

I can see some progress getting made in cleaning up the corruption, still a lot to go. When it comes time for the issues of Arkancide to be addressed, the DNC is going to be left in tatters. Tulsi is one candidate rising that will help with rebuilding this important political institution.

No more Hawwians in the Whitehouse.

originally posted by: Klassified
There isn't much anyone could add to that without being redundant.


It's what Hillary's indictment should read! And thank you old friend same here.
edit on 18-10-2019 by The GUT because: (no reason given)

One has to wonder if the DNC, Tulsi, and Clinton realize that Trump has 2020 in the bag with having so many moderate Clinton hater Democrats having left to look elsewhere. Perhaps, they are hoping to get Green Party interest into Tulsi for a reasoning?

Their simple reasoning may be to draw more votes away from going to Trump. Hardcore Dems will vote party line. Moderates may like Tulsi's spunk and be drawn away from voting for Trump. Basically, creating an alternate option that will not assist Trump gaining those voters. Such a tactic may just give them the edge in an election. What do you think?

This is the reason only Tulsi has an ability to heal the massive rift created by tribal politics for ALL Americans.

Is this Hillary’s reaction to Tulsi calling out the deplorable comment in the debate. It was a stinging rebuke that just because an American disagrees they are not instantly a deplorable, looks like she felt that hit, and fired back with the “Russia” gambit.

What a fool, even many Democrats see it now, even the people that voted for her.

I don't think she will win against Trump although 2024 she will be a strong contender against Pence or who ever the right put up to run in 2024.

originally posted by: OccamsRazor04
a reply to: The GUT

I agree. Trump has been saying the same things for decades. He was a Democrat mostly but the party moved too far left for him. When I voted for him, it was obvious how he would stay the same course.

Tulsi has shown a history of where she stands on issues and she is not going to change direction either. Just because she dislikes Hillary (many do) and calls her out, does not mean she should be President. Her political stances are not moderate left. She really is more a Green party candidate in Dem clothing.

posted on Oct, 19 2019 @ 07:45 AM
link
Even though I disagree with her on almost everything politically, I knew there was a reason I just can't dislike Tulsi Gabbard, especially when she's willing to call out the scum in her own party. Not many Dems at all are willing to do that these days.

posted on Oct, 19 2019 @ 08:24 AM
link
I applaud anyone who stands up to the clinton machine and their pure corruption and deceit.