I think both you and Riffrafter are right.

No, Ezekiel is not describing aliens as we expect them to look like, in the same way today's UFO (or UAP, as they like to call it now, to sound different) sightings do not give us a clear indication of them being alien.

What is common throughout history is the sighting of things the observers could not understand or identify. Does that mean it was a sign from god(s) or an alien visitation? No, it only means that it was something they could not identify or understand, just that.

As long as we don't get clear evidence for any possibility, we should consider all possibilities, aliens, gods, parallel dimensions, unknown living creatures from Earth, etc.

They clearly described them in the Bible, though. They had hooves for feet, for example. Many details were mentioned by them, in fact. Not that it's true, or false, but they did describe them in great detail. Some figure in the sky is close to them... if it is true, that is.

Nobody has described aliens like this, ever. The two cases don't match up, one bit.

The hoofed guys with 4 faces, who knows if it's true or not? Seems far fetched, but who knows?

Aliens are fake, I am sure of that. For many reasons, which I've mentioned already.

How many phases of disclosure will there be?

Ezekiel 1:4-28
The Chariot of the Lord—God’s Throne
4 I was watching a big storm come in from the north. It was a big cloud with a strong wind, and there was fire flashing from it. Light was shining out all around it. It looked like hot metal[a] glowing in a fire. 5 Inside the cloud, there were four living beings that looked like people. 6 But each one of them had four faces and four wings. 7 Their legs were straight. Their feet looked like calves’ feet, and they sparkled like polished brass. 8 Under their wings were human arms. There were four living beings. Each living being had four faces and four wings. 9 The wings touched each other. The living beings did not turn when they moved. They went in the direction they were looking.

Or does the Bible not count?

There were no "history" books back in Ezekiel's time.


That's much more related to the endless amounts of mythic creations half human/animal deities that roamed the skies in the bronze ages.
There are thousands of them. If you are going to count Ezekiel then why not all of them?

If you are a believer in the Old Testament as literal scripture then that's also not ufo related but would be a description of Yahweh riding on his chariot. Ezekiel considered himself a Jewish prophet because of that encounter with Yahweh so it would be weird if it was all a mistake and he was just seeing the wrong deity or an alien ship?

If you look at the sheer number of deities back then it seems commonplace to be seeing human/animal mash-ups. I don't think these are reliable ufo reports.

For a civilization who traveled around galaxies bronze age earth would be pretty dull.


Oh, disclosure, no way. Seriously, no. Look at what's going on right now. Yes police brutality is bad, racism is bad. But the fact that people can organize this quickly when upset about something, overtake 7 city blocks in Seattle, now it's moving to the UK……no way. The government is not going to rile up the public with information that might upset people and make them go nuts for further information.
Or make them unstable in any way. If the disclosure news had any type of effect of creating instability it would be scary. Plus the media is full-on 100% using every fear tactic they can to spike viewership. The media would turn disclosure into a frenzy, they would create fear at every turn and now we can see how things can go.
Not this generation. Assuming they have ufo news they could disclose. Which I doubt they have much. They can't track or communicate with ufos? If anything at all they know very little.
edit on 25-6-2020 by joelr because: (no reason given) 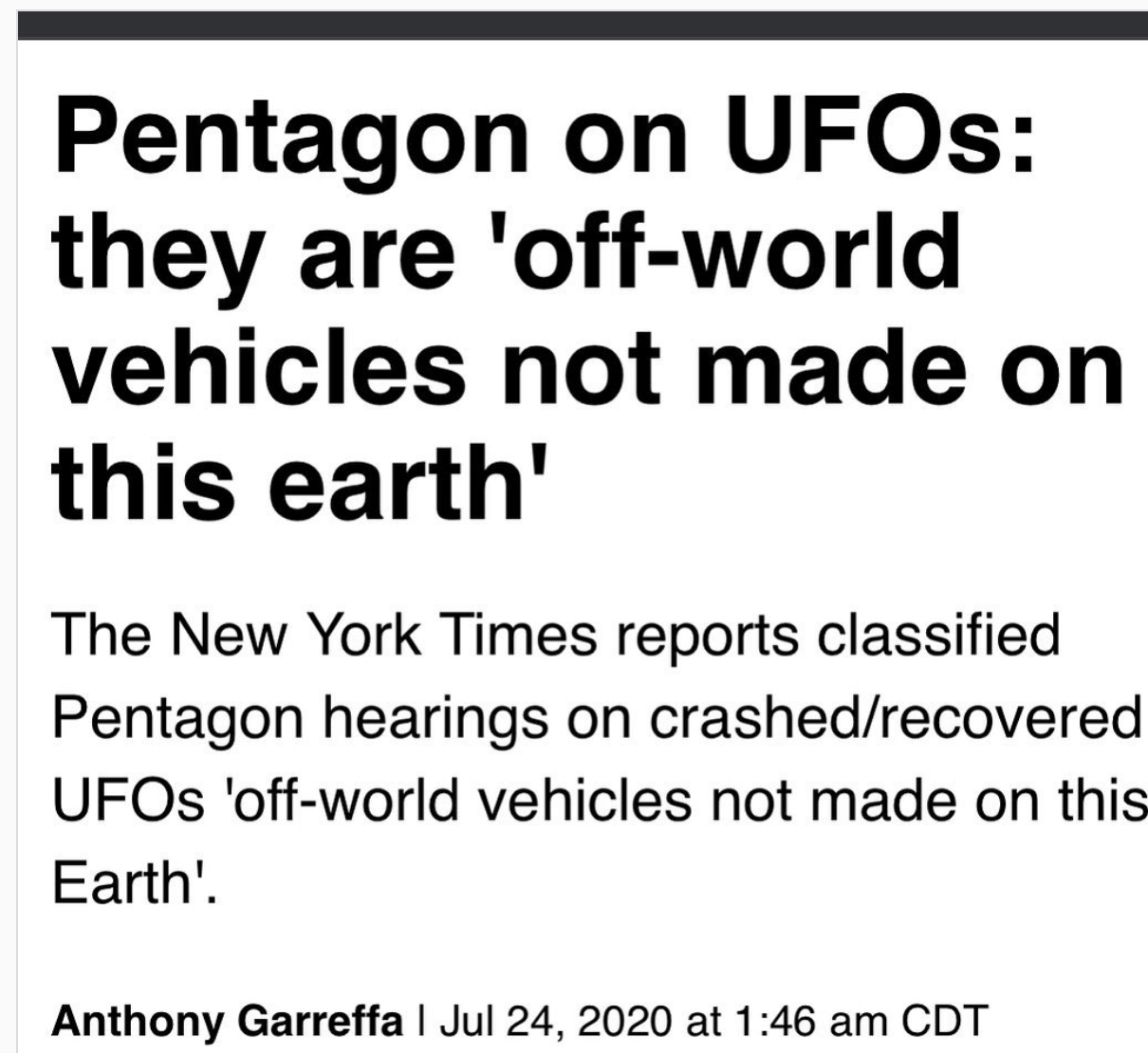 posted on Jul, 25 2020 @ 07:27 AM
link
This would make the transition to the low sci-fi tech faster (for money purposes). Of course the weapon grade or usable-by-other-countries stuff will be hidden maybe even forever. It would be up to the other countries who obtained ufos to release, maybe.

originally posted by: celltypespecific
WE HAVE VIDEO!!!!! ALIEN CRAFT RECOVERED!!!

The first one appears to be a highly advanced, airborne 'Pong' paddle. Another one is most likely the 'USS Enterprise', time traveling (once again!)