The issue was whether Erdogan stops because of the letter . Do you remember the topic of the thread ?

I just gave you a break and you didn’t even know it .

You’re the one moving the goalposts despite me bending over backwards to make it fair .

You claimed Erdogan would laugh at trump. .

Next you claimed the cease-fire was over and acknowledged our bet by telling me to start a thread.

I said I expected a little saber rattling and it’s not over.

Your next post on the 16th claimed I was wrong again.
You had a source the claimed the letter was fake.

Then you pretended the Kurds were part of our bet.


Do you see a reoccurring theme here?

At this point I was feeling sorry for you so I tried to give you a little more time.

Despite my attempts to give you a little rope with you being the only person that could benefit from it. You accused me of moving to Gold Post like it would be in my favor or something. SMH

I’ll put that down as wrong as in wrong decision.

On the 17th you again trying to prove your original point that nothing would happen Edrogon would mock Trump.

Once again you were like the energizer bunny of wrong. (Jk)

Yes I move the goalpost for your benefit. But at least you acknowledge the bet and chose your own time limit on it.

I tried to tell you it should’ve been a longer time period. But you had decided I was moving the goalposts in my favor and settled on seven days.

The three days and the bottom paragraph were referring to the cease-fire that just went into effect. Which was part of our original bet on the proposed cease-fire.

By now feeling sorry for you had turned to pity.

Our bet was up on October 23th this post is from the 26th. But I still tried to make you understand that you needed more time.

For some reason which I assume must be lead in your tapwater. You again refused the extension on the bet about the cease-fire and Erdogan mocking Trump.

I did my best to be fair and straight . You would have none of it.

The extension is no longer offered because of your evasiveness.

Operation peace spring is ongoing inside the buffer zone i’m sure there’s some sporadic fighting. There’s been fighting in that area for 4000 years. On top of trying to add the Kurds to our bet earlier . Now you’re also trying to pretend American movements to protect oil fields on the other side of the buffer zone are part of the deal .

The bottom line is per our bed and time limit .

The seven day time period is up by a large margin.

I would ask you to abide by the conditions of the bet but you’ll never hold up your end so why bother.

Do you honestly think I give a sh!t about what you think of my character? You lost, you know it but your obsessive compulsive pride won't let you admit it, thus you rely on halfassed fake news and fabrication of what you want to believe, not reality. This post proves it.

To put this amount of energy and emotional investment in a silly internet thread; I might suggest a session or two with a qualified therapist might be in order.

Did Erdogan mock trump within the seven day window ?

Did the cease-fire collapse within the seven day window ?


That last part wasn’t really addressed to you. It was for everyone else that reads it so they know what you’re made of .

Have a nice day .

posted on Oct, 29 2019 @ 10:45 PM
link
I have a very different impression of Trump when it comes to military affairs. The main reason is how he handled North Korea. Since his talks, NK has been stockpiling nukes and testing missiles. They even reportedly now have a ballistic missile sub. It is not safe for SK and we are less safe as well.

There was a lot of nice talk about peace between the nations or even reunification, but anyone that knows about that region knows that neither side wants that. SK may talk about reunification during elections to the populace, but the truth is that if it ever happened it would ruin their economy because it would be overburdened by the poor masses to the north.

It just seems to me that Trump went in half-cocked and uninformed to showboat. Security in that region may be worse than it was before and nothing is being done about it now that there is no longer a photo op involved for him.

Can I get you on record once and for all? Are we and should we be the world's police force?
*tilts mic in your direction and waits patiently*

NK has threatened to nuke us going as far as to make a cheap movie/video of them nuking us.
Do you think it is in our interest to keep them from being able to?

NK has threatened to nuke us going as far as to make a cheap movie/video of them nuking us.

Do you think it is in our interest to keep them from being able to?

The same way I felt about obama sending troops and weapons to saudi arabia, indifferent. I don't like it but I understand it.

This is the reason we keep a tenable relationship with saudi arabia: 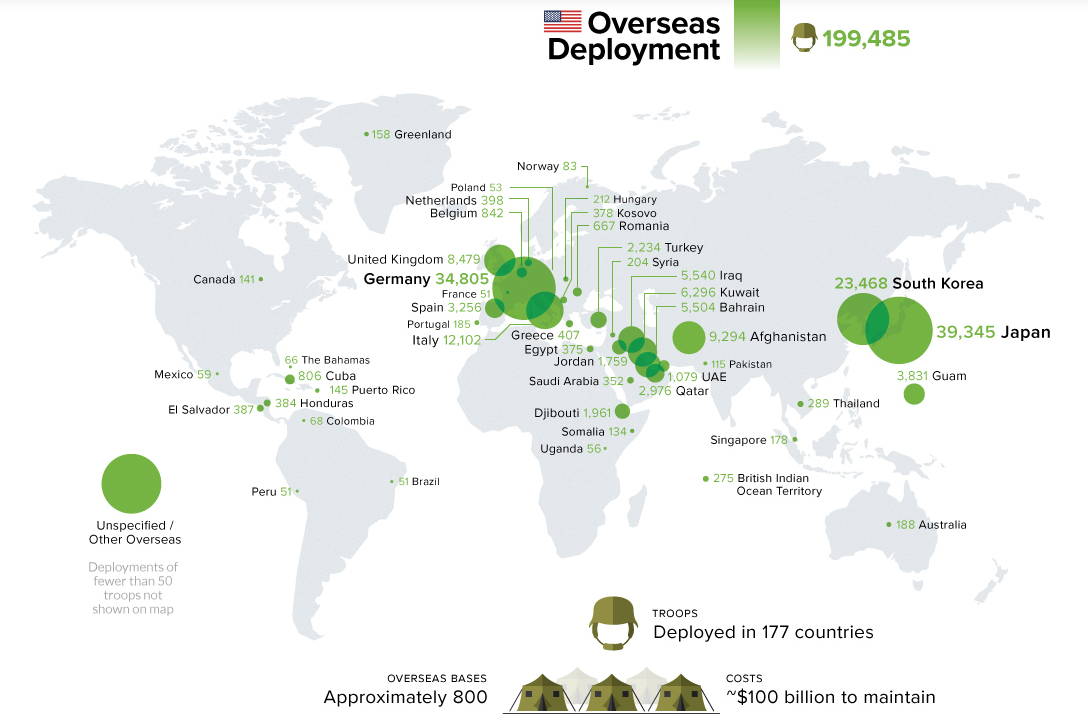 Now, I'd like to see us step back a little bit and really assess US interests. We only really care about the middle east for two reasons:
1) to contain russia and china
2) to help europe get oil

We used to have a direct interest in oil there, but now that we're a net exporter we don't really have to care other than for the sake of europe.

Considering the map I posted, what happens if on Jan 1, 2020 trump brings every single troop home? I'm not saying that would be a good strategy, I'm just asking what you think russia and china would do? Is the danger of them advancing on other countries real? Should we care? I mean, sucks for them, but they've had a free ride paid for by american blood long enough.

Make Europe send their soldiers to protect their oil supply. Get us the hell out of the ME. We send billions to Israel and that was supposed to be our surrogate power in the area yet we are the ones with soldiers fighting and dying in the region.

We have this military yet it does very little to protect our interests. On our southern border, there is a corrupt government that are puppets of drug lords. Millions of US citizens have died from the drugs smuggled into our country.
There would have been no or very little world outrage if we had a president that put his foot down and said "ENOUGH."
Rangers and spec ops should have swept out the cartels and gangs a long time ago.

There was all the posturing earlier about saving Venezeula and not long ago we invaded Panama. So every time I see the war drums being beat to liberate or save some people I know it's a racket. None of those places were direct threats to our people or our land. Those that do threaten us we should hammer until they don't have the ability to harm us in any way.
edit on 30-10-2019 by Grimpachi because: (no reason given)

I've been saying it for years. Make them, by force if necessary, the 51st state. We can clean up their mess in a few weeks. they already have a fully fenced border. Strategically it's much better for the US. We take many of their poor in the form of illegal immigration each year. Their economy is fully dependent on ours. The only cost is some lives, which are being lost to cartels and human traffickers right now anyway. In the long run there would be far fewer deaths.

Also, the Mexican military lost a fight with the cartels just two weeks ago. So they're not really a threat.


Not sure where you got that info but its false according to Trumps envoy to Syria and Mark Esper, international watchdogs like the UN and Amnesty International and independent verification. There's very graphic video of what happened if you search for M4 beheadings by Turkey backed Ahrar al-Sharqiya.

At least 500 were killed in the 'cease-fire' with summary executions, beheadings and chemical weapons being used with Turkey being investigated for war crimes. Erdogan threw the letter in the bin, said he'd crush the skulls of any Kurds and demanded all Kurds leave Syria and Iraq.

Ig it did occur was it a advancement of Turkish troops that continued the offensive and passed the buffer zone ?

Just to bring you up-to-date. Turkey announced operation peaceful spring to clear out terrorist inside the buffer zone. The majority are probably PKK the same group they’ve been fighting and bombing inside turkey since 1978 .

Or is it militias cutting off each other‘s heads like they’ve been doing for 4000 years ?

Please don’t inject yourself in a dispute that’s been going head to head for over a week. ✌️

posted on Oct, 30 2019 @ 08:58 AM
link
The Kurds never agreed to a buffer zone. It wasn't majority PKK as 200 of the dead were civilians with another 250 unaccounted for and the majority of troop deaths on SDF/YPG side with a further 300,000 civilians displaced during the alleged ceasefire.

The militia is a splinter group of terrorist group al-Nusra and was founded in 2016. They operate under the orders of Turkey, who supply the majority of their funds and arms, their secondary source of income is smuggling ISIS fighters to Idlib. They carried out the majority of the war crimes and freeing several hundred ISIS prisoners from Kurdish jails (apart from Turkish jets dropping white phosphorus on civillians in the first two days of the ceasefire)

Erdogan had been bombing Kurds in Iraq for a few years. He considers both the PKK and YPG/general Kurdish population as terrorists to the extent he's happy to see ISIS fighters freed to maximise Kurdish loses. The rest of the world sees PKK as terrorists but YPG/SDF as allies in the fight against ISIS.

I can only assume that was directed at me ?

Show me where cease-fire collapsed and Turkey resumed their Full scale invasion of Syria before October 23rd ?

If you can’t do that your unlinked data is irrelevant concerning that topic .

I’m not saying your information is wrong.

I’m just saying it has nothing to do with the terms of the bet.