The Dems keep saying that President Trump is the MOST " Corrupt " President in History . If you Follow their Documented Warped Political Mindset , they are REALLY Saying the Opposite . He Is the " Greatest " President in American History Because his Actions are Insuring Our Republic in America as we have come to Know it Today , will Still Exist in the Future . Yeah , I'll Buy that ...
edit on 16-10-2019 by Zanti Misfit because: (no reason given)

That letter proves Trump did not give the green light for Turkey to invade, like many have been claiming.

I mentioned in another thread that the US forces were minuscule. They were basically in place for operation tripwire. At that time I thought it was around 100 troops. Now they’re reporting that it was somewhere between 28 and 50 troops that were moved .

That minuscule amount wouldn’t have been able to do anything whether turkey invaded or not. They would’ve been surrounded and isolated probably without any harm to American soldiers .

I’m gonna quit doing the Democrats bidding on that issue .

The biggest problem with this move was optics . It looked bad but I’m waiting around for the endgame now .

We drop some bombs in a attempt to overthrow Assad . But I agree we never should’ve stuck her nose into it with the exception of “bombing the # out of ISIS”.

Hopefully the Kurds will get a chunk of land from Assad. And in return they will guard Syria’s eastern border from Islamist . ( talk about strange bedfellows )

Then this whole mess will come to an end. Assad won’t be overthrown so the mess needs to die down before tens of thousands of more people are killed . 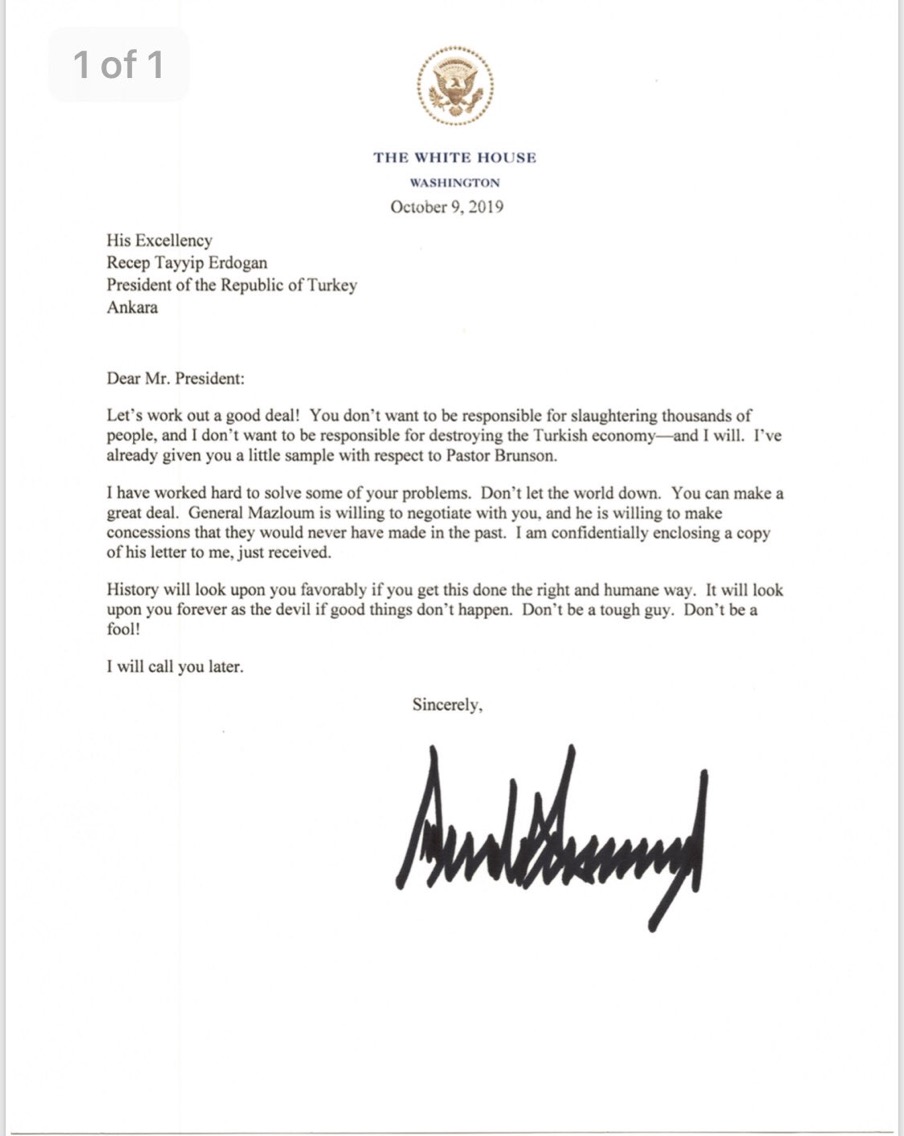 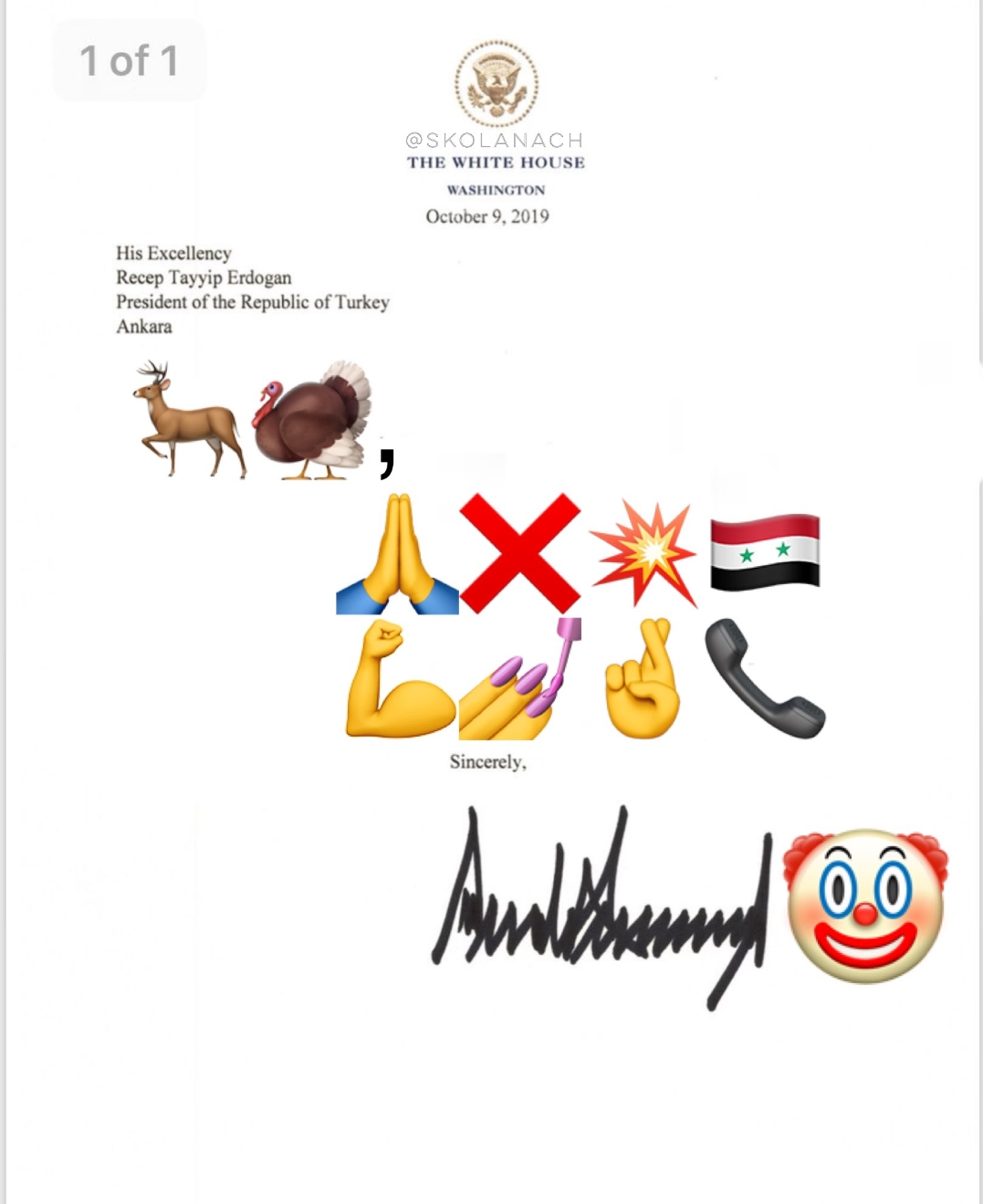 
Its not funny when all Americans are affected by trump's buffoonery, not just his mental fans.
In a weird way...its a little funny...but just a little

Russia needs payed for the war , and Syria's oil is all in the north where the Kurds are , not to mention that Turkey gets to drill in the Med for oil under Cyprus

But something that people need to remember, is these arent the same Kurds we fought beside in Iraq and other areas.....

They are Kurds of a different type......

That being said, im not comfortable leaving them in this situation unless there has been a plan implemented to take some counter actions......

My best hope is that it exposes Turkey for who they are , and ends up with their removal as an Ally of the US.......


I saw this earlier. It struck me how informal and weird it was, like he's talking to a child or an underling.

Basically lets make a good deal! (the exclamation marks are weird, why is he yelling so much in text. In person that'd be disrespectful and the fodder of jokes) or ill destroy your economy (make all of your innocent citizens suffer). History will look upon your small operation into a small stretch of territory to create a safe zone (however unnecessary it may be) and will put it next to Hitler's holocaust in the E-books.

Ends dramatically with don't be a fool!

But the part that I love the most is how he ends it. "I will call you later" like they're co-workers from the same office. You just threatened to do that to my entire nation, make my citizens suffer and insinuate that I'm a fool for wanting to secure my border?

Call me naive but i'd like to think TPTB in the world are going to make sure that doesn't happen. Turkey is "NATO" afterall and I highly doubt they want that mess to happen at their undisputable, obvious blame. Great care is being taken to make sure that doesn't happen. Those prison camps are either being avoided or if taken will be with quick and overwhelming force applied precisely to the best of the ability. Which brings up the question by the way, why would Turkey want to gain possession of the ISIS prisoners to begin with, much less be obviously responsible for them escaping and resurging? 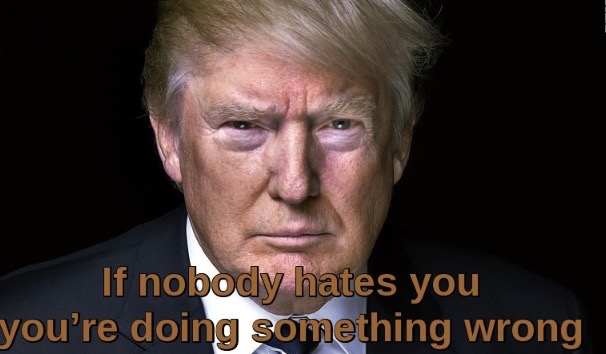 Yeap, I laugh at trumps stupidity, then you laugh at me laughing at him , it's called winning bigly.

What's trump gonna do "lock her up"

originally posted by: Zanti Misfit
a reply to: ManBehindTheMask

And obama was fixing bush's mess.

And bush was fixing clinton's.

And so on and so on.

Does anyone remember who the first potus and/or congress that got us involved in the middle east?-----real question.

That's why I'm not so hard on any of them.

Trump isn't about to fix mid east problems.
And like the rest he is likely to make it all worse in the long run.

I already read that earlier . I fully expected him to rattle his saber .

Do you take me up on the bet or not ?

Positions like yours makes me ill. You want Trump to fail so badly in North Korea you ignore what nuclear weapons could do to Japan, Taiwan and South Korea. You don’t care, all you care about is your petty personal vendetta .

Basically you’re rooting for the chance of millions of people dying. But “orange man is mean” takes precedence to being a loving caring human being .

It’s the same with the Syrian offensive. You want Trump to fail so badly you’re happy with tens of thousands of people possibly being killed .

Do you want to bet me or not ?

But no pressure. None at all...