A brutal video clip depicting Donald Trump shooting and stabbing media characters and political opponents was shown at a conference for his supporters, the New York Times reported on Sunday.
In the internet meme – taken from a scene in the movie Kingsman: The Secret Service – the US president’s head is superimposed on a man opening fire at people whose faces have been replaced with the logos of outlets including CNN, the Washington Post and NBC TV.
As the rampage continues inside the “Church of Fake News”, the Trump character strikes late senator John McCain on the back of the neck and torches the head of Senator Bernie Sanders, a Democratic presidential rival.
He throws Republican senator Mitt Romney to the ground and strikes former president Barack Obama in the back and slams him against a wall.
The organiser of last week’s “American Priority” event – which was held at Trump’s resort in Miami – said the clip was part of a “meme exhibit”.
“American Priority rejects all political violence and aims to promote a healthy dialogue about the preservation of free speech,” Alex Phillips told the Times.

CNN wrote on Twitter: “This is not the first time that supporters of the president have promoted violence against the media in a video they apparently find entertaining, but it is by far and away the worst.”
Trump, the White House and his campaign must denounce the clip, the channel said, adding that “anything less equates to a tacit endorsement of violence”.
The White House Correspondents’ Association also called on Trump to denounce the meme.

It is so good to see that all the "right-thinking" people are shocked and appalled by this horrible video meme that you can see here. . . .

Now when Snoop Dogg did a video assassinating Trump, it was "art" and "parody".

When Trump was depicted at a play in Central Park as Caesar, it was also "art".

I'm sure everyone here will agree though, that free speech is paramount and while not supporting the video meme, do support those with the right to create and display it. 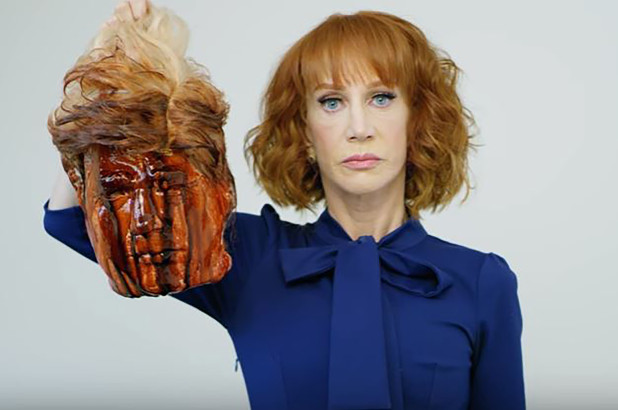 I do. It's hysterical.

I thought it was clever.

I'll give it 5 minutes, though it has been around for a while....hmmm?

That was pretty funny.

Hey DB,you forgot to mention that Kathy Lee griffen is properly cheesed off about this trump video.
I # you not.

Comedian Kathy Griffin has voiced outrage over the disturbing pro-Trump parody video that depicts her being savagely beheaded with an ax.

She thinks people won't see the trump parody video as a joke,and may lead to violence.
And also has no sense of irony it seems.

So she’s suffering from an iron-y deficiency

I find it pretty hilarious and well done. I am a big fan of the Kingsmen movies.

If folks are offended then thay should have been offended at the movie in the first place.

posted on Oct, 14 2019 @ 06:16 PM
link
This video is the result of what the democrats have done themselves. They own this. I hear they want Trump to condemn it for them, but this video would never have been created if not for the actions of the democrat party.

posted on Oct, 14 2019 @ 06:21 PM
link
Tim Pool made a good point...the original video shows a massacre in a christian church and the outrage mob didn't give a damn.

I agree...
The guy that does these is very entertaining!

posted on Oct, 14 2019 @ 06:31 PM
link
It's amusing, but what really makes these memes good is the pearl clutching from people that don't understand the internet and it's culture.

They amplify the humor by being so serious about it.

posted on Oct, 14 2019 @ 06:34 PM
link
I love the video.
Why should Trump denounce it? He had nothing to do with it.
Can any Leftist tell me why I should give a sh!t what the media and the Democraps say about it?
On second thought, don’t bother because I don’t care.