page: 1
50
<<   2  3 >>
log in
join
share:
shawmanfromny
+23 more
posted on Oct, 14 2019 @ 10:02 AM
link
I remember watching this footage last night on ABC and thought that I had seen it before somewhere. Well, it turns out my suspicions were right. ABC apparently used footage from the Knob Creek night shoot from 2017, which takes place in West Point, Kentucky....NOT SYRIA! Just another reason not to trust anything you see or hear on MSM!

^You can't post the YouTube link, because ABC News has made this particular video clip, showing this combat footage, PRIVATE. Their other videos on their YouTube channel ARE NOT private. Why this one? That's OK, because the ABC clip was captured on the Twitter post shown below. 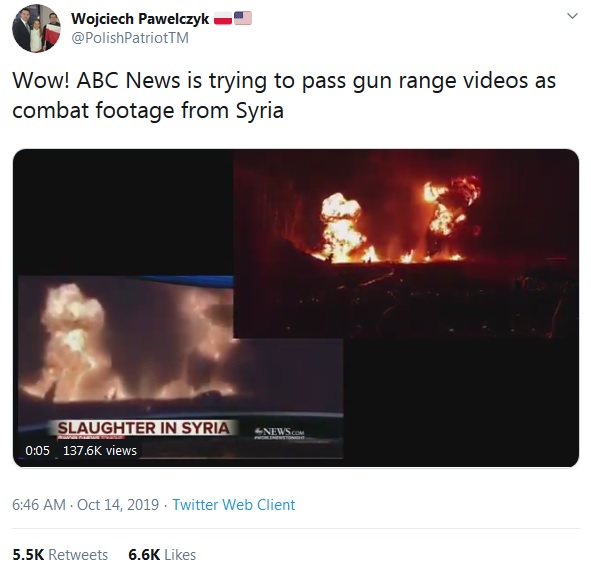 Ha...I saw this earlier on Twitter too. Talk about egg in ABC's face.

This is the epitome of fake news.

"Some of what you are about to see is graphic, and may be disturbing to some viewers."

None of the liberal media will be able to spin or fake what's coming this week. PAIN for their establishments, and the officials they have successfully bribed in the U.S. government.

Well Adam Schiff did warn us about fake videos........

qft
this is simply horrible
why would anyone trust abc news again?
after the whole brian ross incident why are they even relevant as actual news?

this made me chuckle.
good find.
funny, the newspaper reporters are supposed to be the watch dogs looking at politicians and corporations and reporting their antics. only to find we now also need someone to watch the media reports too.

i guess ATS and other sites like it, are the new watchdog.

posted on Oct, 14 2019 @ 11:15 AM
link
It's all pablum for the uninformed masses. Used to sway public opinion, "By Any Means Necessary". Hmmmm....that phrase sounds eerily familiar.

ABC aired supposedly shocking footage Monday morning purporting to be from the frontline battle between the Syrian Kurds and the invading Turks. The only problem is the footage appears to come from a nighttime demonstration at the Knob Creek Gun Range in West Point, Kentucky.

A spokesperson for ABC conceded it made a big mistake.

"We’ve taken down video that aired on 'World News Tonight Sunday' and 'Good Morning America' this morning that appeared to be from the Syrian border immediately after questions were raised about its accuracy," a spokesman told the Washington Examiner."ABC News regrets the error.”

www.washingtonexaminer.com...
edit on 10/14/2019 by shawmanfromny because: (no reason given)


Your right...
Orwell, Wells, Asimov, Bloch, Clarke etc.. they all would be disgusted by this.

Science fiction writers have been warning us about the fake MSM propaganda machine for a long time. Just wait till they get their hands on a three-dimensional holographic laser projector!

Should be a good day to pull this one out of the proverbial meme shed: