Yeah , and Some people don't seem to understand that Joe Biden does not have a Smowball's Chance in Hell of becoming President in 2020 so it's a Moot Point ...

Yes it was ratified.

give me a few, late lunch had time to kill, but I will.

originally posted by: Phage
a reply to: missed_gear

You can't quote even a little bit of it which might be relevant?

Was the treaty ratified?

THis bit should be conclusive enough:


To the Senate of the United States:
With a view to receiving the advice and consent of the Senate to ratification, I transmit herewith the Treaty Between the United States of America and Ukraine on Mutual Legal Assistance in Criminal Matters with Annex, signed at Kiev on July 22, 1998.
I transmit also, for the information of the Senate, an exchange of notes which was signed on September 30, 1999, which provides for its provisional application, as well as the report of the Department of State with respect to the Treaty.
The Treaty is one of a series of modern mutual legal assistance treaties being negotiated by the United States in order to counter criminal activities more effectively. The Treaty should be an effective tool to assist in the prosecution of a wide variety of crimes, including drug trafficking offenses. The Treaty is self-executing. It provides for a broad range of cooperation in criminal matters. Mutual assistance available under the Treaty includes: taking of testimony or statements of persons; providing documents, records, and articles of evidence; serving documents; locating or identifying persons; transferring persons in custody for testimony or other purposes; executing requests for searches and seizures; assisting in proceedings related to restraint, confiscation, forfeiture of assets, restitution, and collection of fines; and any other form of assistance not prohibited by the laws of the requested state.

So the sham impeachment enquiry you are cheering on is based on your President following an agreed treaty ratified by the Senate.

Gives more than a little to help you understand why there has been no floor vote and the House has decided to conduct secret and exclusive hearings, whilst cherry picking statements to the media. Its an election strategy, pure and simple. Democrats are hoping there are enough idiots who will buy it.
edit on 13/10/2019 by UKTruth because: (no reason given)

Democrat strategists are fully expecting voters to believe the JoeyBillion family is trustworthy and completely honest.

a reply to: xuenchen
At least we know, as do you, trump is completely dishonest and are traitors to our country.... right?

you have a problem with something Biden did years ago but laud trumps traitorous actions today?

But hey, what does a star and flag pay you these days?

you are a joke. (smoke in your face) lol

" you have a problem with something Biden did years ago but laud trumps traitorous actions today? " 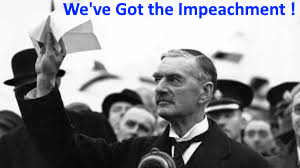 that whole constitution thing? You know the one you all hate.... yeah that one...

maybe you should run up there waving that piece of paper... surely they have never read it.... you could be the savior of trump.... just go wave your paper

Congressional democrats have begun inquiries into impeachment of President Trump allegedly because Trump “tried to pressure” the Ukrainians into investigating possible corruption by former VP Joe Biden and his son. I have not heard reference of this treaty from the democrats or the “mainstream” press.

However, Trump was entirely within his legal purview according to a treaty signed into law during the Clinton administration: Mutual Legal Assistance in Criminal Matters.

The original treaty was signed in Kiev on July 22, 1998. Clinton transmitted the treaty to the Senate on October 19, 1999, and it was ratified by the Senate on October 18, 2000. The following link shows Clinton’s Letter of Transmittal, Clinton’s Letter of Submittal in which he summarizes the main points. This is follow by the full text of the treaty.

Artcle (One of many that pertain here) from.the treaty:

Article 13 requires the Requested State to use its best efforts to ascertain the location or identity of persons or items specified in a request.

10/18/2000
Resolution of advice and consent to ratification agreed to in Senate by Division Vote.

In such a case, doesn't the president have to finalize the ratification? Did Clinton do so?


In any case, why the back channel? Shouldn't that sort of thing be handled by the DOJ? Instead of Trumps personal attorney?

Article 1(4) states explicitly that the Treaty is not intended to create rights in private parties to obtain, suppress, or exclude any evidence, or to impede the execution of a request.

Seems Giuliani's involvement would nullify actions under the treaty. It's specified that the authority lies only with the Attorney General or someone authorized by him.

a reply to: tinner07 " you have a problem with something Biden did years ago but laud trumps traitorous actions today? " And what would that be Mr. Uninformed one ? Your TDS is showing , better go take your Med's......... " trumps traitorous actions today? " Do you Realize how Dumb that Sounds ? Oh , and better keep that Helmet on just in Case ......

How many times has trump...you know, the President of the United States, used the word traitor about his political opponents?

You think it is stupid if I say it? but not if the President of the United States says it??? Is that what you are saying?

I need meds and a helmet for saying pretty much what the President of the United States is saying???

You holding me to a higher standard than him? just curious.

How many people here have used the word traitor? everybody.... but I use it and I need meds...LOL... Justify your support for the jerk water in charge...but yeah... call me out.... lol

originally posted by: Phage
a reply to: EartOccupant

Do you think it would be a good idea for him not to resign if his father is elected?

I don't. An appearance of conflict of interests is not a good thing when it comes to high office. Some people don't seem to understand that.

Didn't Hunter TAKE the "job(s)" when his dad was in high office?

you are right and I apologize... I did not know that you were the most informed person on the planet.... my apologizes for thinking for myself without consulting you first....

Article 4 prescribes the form and content of written requests under the Treaty, specifying in detail the information required in each request. The article permits other forms of requests in emergency situations but requires written confirmation within ten days thereafter unless the Central Authority of the Requested State agrees otherwise.

Surely the written requests from the Attorney General are available if the required protocols were followed. Why would they be withheld? Wouldn't that make the whole question moot?

Maybe the required protocols weren't followed. I wonder if that might be considered a violation of the treaty.

Traitor is What Traitor Does Forrest .

I am Not . Just pointing out how Ridiculous some of the Things you are saying in this Thread without Conformation .

originally posted by: Phage
a reply to: IAMTAT


Apologies.
I began at the beginning of the thread...before I was able to read all your qualifiers to your original post.

Still...Hunter had plenty of time & opportunity to correct his "bad idea" while dad was still in high office.
Why correct it now and not then?

He just got called out on it?
He already made plenty of money from it?


He just got called out on it?


I would say that is quite likely.
Sure wouldn't help his dads chances if he stayed on board.