My wife and I moved into our apt at the beginning of the year. It took us two years to get in due to limited housing here. Moving is not an option or we already would have.

The house next door openly sells heroin, speed and who knows what else. The "clients" are mostly the transients in town. The house draws a constant flow of transients, gang members, and general riff raff. Cars will line up next to our house and the guy will come out and go door to door handing out drugs. When people show up on foot they usually come to our house after purchase and sit against our house to shoot up. I've lost count how many people I've run off with a needle hanging out of their arm. People will park on the street right in front of our window and do deals. They've used our cable box as a drop a few times which ended up causing these tweekers to wonder around our house pulling at things to try and find stuff. In the middle of the night they'll meet up in the street on bicycles and brag about what they stole that night. Last week a transient who's been living in their back yard set a pile of rubbish on fire. The fire department arrived and put it out then left with nothing further. The cops have come to their house a couple of times and each time they'll scramble yelling at each other to get the drugs out of the house. At which time someone will run out the back yard with a shopping cart full of ?. We put up cameras and have recodings of their comings and goings, but it doesn't show actual sales. Just heavy foot traffic. About two groups of people each hour all day and night. We've talked to the PD who have said they know about the house and it's "on their radar", but nothing ever happens. The PD told us that we have to provide them proof that sales are being made for them to do something. This makes no sense to me. We've told them we have video of activity, but they refuse to look at it. It's the police job to investigate suspected crimes. They already said they know what's going on there. Why would it be up to the public to put themselves in harm's way to develop evidence of what's happening? We've reached the end of our rope and my wife is afraid to leave the house by herself. Are there any suggestions we can try to deal with this?

aggghhhh - you both beat me to it!

1. Call the local news station and let them report that the police fail to act on a known drug house. Maybe that will shame the police into doing something.

2. Broadcast police siren sounds randomly to keep them on the run, and scare away the customers. Make them so on edge that THEY will move.

Let me get this straight...

When the cops are at the door they run out back with a shopping cart full of drugs?

Have somebody dress up like the police, knock on the door then be waiting out back with a ski mask and take the shopping cart full of drugs. Repeat as necessary. Whenever you need money or drugs. 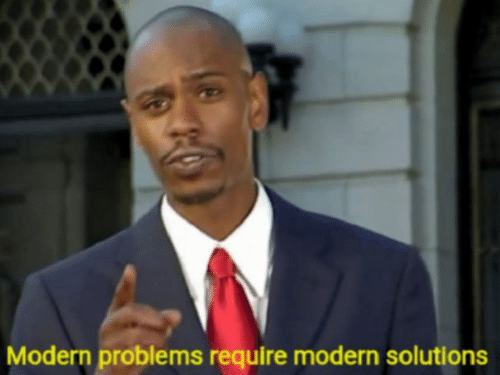 posted on Oct, 6 2019 @ 07:44 AM
link
Did the police give you any tips or can loan any equipment if you did want to go and organize a sale? If that is all they need to move should be easy enough.

Also need to consider what the police will do as well. Just get a fine and out again tomorrow with a bigger problem? Trying to raise a family in this environment is problematic.

originally posted by: Shamrock6
a reply to: SilentWindofDoom

Good advice here, and it may well be that they're working to fry bigger fish.

Like Shamrock6 said, contact the narcotics division and I advise recording your conversation and make sure to tell them how they run out the back. If nothing happens then go public. Post your videos on youtube and it will same the precinct into doing their job.

Sooner or later the place will be busted and if it was me I would be worried about them getting the wrong house so clear communicate the correct address.

I hope you have something to protect your home. Pro 2nd.

posted on Oct, 6 2019 @ 08:21 AM
link
Long term drug users while under the influence or during withdraw cannot be predicted. Ever hear the term, "Snitches land in ditches".

Your only solution is to pack up and move away.

Keeping this attitude you have of "justice" puts you and your loved ones in constant danger.

They too can make and throw molotov cocktails.

Can only tell you....with what you say here...I'm absolutely sure they are under surveillance...and are recording plates.

Keep your smile up and wave and go about your day...don't hide or ignore....*

posted on Oct, 6 2019 @ 09:14 AM
link
Thanks for the suggestions. Believe me, I have considered the gas can option. I would not want someone to get hurt though or neighbors property damaged. I've spoken with the Task Force, they are the ones wanting proof. Both task and patrol refuse to look at video's we've taken. I can't see FBI giving two shakes about a slum house in a bad neighborhood in a small town. I'm sure they have more pressing matters to deal with. The two ideas that PD is on the take, or it is an ongoing sting have both crossed my mind. If they are on the take, there is no hope for help. If it is a sting, it's been a year for us and all of our neighbors have pointed out that this has been going on for many years prior to us moving in. We've even pointed a patrol officer to the guy running out the back on one occasion at 2am, with the officer shrugging and walking away. We would like to move, but as I said, it took two years just to get this place. My job is here, so can't move to another town, which where we are at, means moving to another County or further to find work. It seams wrong to let this continue though. I mean if we keep giving in and moving away, soon their will be nowhere to move too. I've considered if there was someway to bug the sh!t out of them anonymously. I've gotten fed up and angry enough that I've gone out and taken pictures of these people as their trying to do a deal. I know, stupid. But, that doesn't deter them. We kick them out of our drive way, off our back porch while smoking out of tn foil. They dump over the trash cans on trash day and strew trash down the alley. I mean if the cops don't see this as something that needs to be dealt with, than WTF?

Respond there
edit on 6-10-2019 by mysterioustranger because: (no reason given)

Dont try the gas can option. The cops would sooner lock you up than the druggies, probably because the cops are getting paid off to look the other way.

Sounds like somebody there may be paying off the police to have been in business so obviously for as long as they have so there is a good chance that every time you call the police your neighbor is being told- which could end up being very dangerous for you and your spouse, as would going public via news or Youtube.

My advice to you is save your money, keep a low profile, and sleep with a firearm until you can get the hell out of there! Making a stand seems all hunky dory until you're the one living in the middle of it all and it is your life in jeopardy. If you think things are bad now you have no idea how much worse they can get.