How far is the Left willing to go..

posted on Sep, 27 2019 @ 11:34 AM
link
Its a simple question.. but the answer is very complicated.. As of now they are calling for impeachment, but as the investigation goes there will be a lot uncovered about Democrats and things they have said in did in regards to the Ukraine. If we look at what is out there now 3 Senators and one former VP and current POTUS hopeful would be dragged in every hearing in front of every camera by the Republicans. Now the former VP all but said that the then POTUS Obama gave him the green light to do it. Are the Democrats willing to tarnish Obama's name just to try and get Trump out.

There has been a crazy precedence set by releasing the call transcript, who is to say the Current POTUS does not go back and look at transcripts of POTUS Obama's calls and starts to declass them.. No future POTUS will be able try and complete any type of diplomacy over the phone.. let alone in person as they will not be able to trust anyone, I am all for Whistle Blower protections but in this case they have to testify and they have to give up names of who they got the information from. There is too much at stake for it not to happen. This is going to change the face of how things are done for generations to come,

SO what say you all..

After all, we will lose our jobs, guns and taxes if we don't 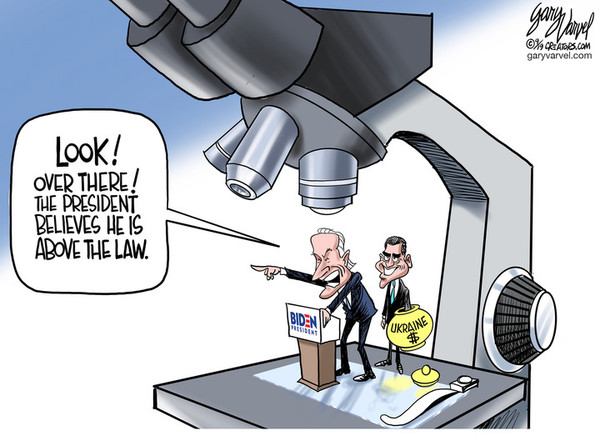 As a centrist, or a moderate, I don't like where this is going. I do want the truth and justice to come out for all implicated.

Perhaps this is a good thing though... perhaps this is the ONLY way the swamp will ACTUALLY get drained. On all sides. If Trump goes down because of what the investigation finds, then so be it. And if Biden goes down, so be it.

But where does that leave us?

Warren and Sanders against Walsh and Sanford? I don't know. I have a feeling moderates will start getting more exposure if that happens, such as Yang and Buttigieg.

originally posted by: spiritualarchitect
"How far is the Left willing to go.."
Seems to me they are willing to go insane. We're talking Full retard.

They are already insane!

posted on Sep, 27 2019 @ 11:55 AM
link
a reply to: Oraculi I can agree with some of that. I think its going to lead less people running for office we will be stuck with swamp rats from both sides. I am sure we all have skeletons in our closets to include moderates. I think of myself as a independent. Yes I lean a little right but that is due to my jobs.. I go with who pays be well and usually its the right..

originally posted by: Stealu1two
a reply to: Oraculi I can agree with some of that. I think its going to lead less people running for office we will be stuck with swamp rats from both sides. I am sure we all have skeletons in our closets to include moderates. I think of myself as a independent. Yes I lean a little right but that is due to my jobs.. I go with who pays be well and usually its the right..

I don't look at money though, as important as it is. Money comes and goes, and I've lost everything due to unforeseen circumstances a couple of times in my life. I've learned not to really focus on that as much. My bills are always paid and there is always food on the table. I am lucky to be an American.

Instead I focus on morals and ethics, the way humans act toward each other. I want the swamp drained, but I realize that swamp is deep on both sides.

I was talking to a friend last night, a Democrat, and he shocked me when he portrayed just how happy he was Trump happened. I was taken aback, but then he explained that none of this fallout on both sides would be happening without his character flaws and his antics. We might have even ended up with another crook, Biden, in the office. He really will drain the swamp, even though he and his people will be a part of the drainage.

posted on Sep, 27 2019 @ 12:05 PM
link
I don't think the left has a line they won't cross in an attempt to discredit, silence, or beat the opposition. Just this week I saw Democrats try and marginalize a black woman Candice Owens and use a child as a political pawn Greta.
edit on 27-9-2019 by JAY1980 because: (no reason given)

They have plainly and proudly stated, #resist By Any Means Necessary. I think it is blatantly obvious in their words and actions that there is no gutter they won't crawl through and no lie they won't utter in order to gain power back.

originally posted by: gortex
a reply to: Stealu1two

you go ahead and go with that

I am not one of his faithful.. as I stated before they all need to go down.. all of them that have paid out money for sexual harassment claims that are being protected too..

Yes the transcript was released.. the Dems even admit it they know if they want to actually hear the call that it will get even uglier and that is a fight they will lose. It goes back to are they willing to tarnish Obama cause that is about to happen Crazy Uncle Joe already put it out there that Obama supported with holding money if they didn't do what he wanted.

Personally I have got a chance to hang out with CUJ he is not a bad guy hell I would still go out and have drinks with him. But even he has to see this is wrong


Merriam-Webster took to Twitter to clear up the difference between the two words, noting a transcript is "a typed copy of dictated or recorded material" and a memorandum is "an informal report or message."
thehill.com...

Let me help you out.. cause I do care.. It is as official as you can get in the government... a whole lot is done with-in the government thru memorandum's.. How do I know this you may ask well let me tell you.. I wrote at least 2 to 3 a freaking day.. What do you think oh James C. of the F.B.I. was writing up in his car...so please stop..

EDIT: Also the IG paper work is also a memorandum.. the formatting gives it away...