Looking For The Illuminati

posted on Sep, 21 2019 @ 10:54 AM
link
I'm searching for them mostly because no one has been able to answer my questions and at times I dream about them which is strange but still I want to know why.

I know some of you will say it is better to not know and stay as far away as possible, yet I'm constantly being pushed into their direction and I can not explain it.

I guess this goes to any members or observers on here, "Vita Arcana" a phrase given to me by a whispering voice.

I want answers and need to know the truth!


The whispering voice also told me that they've been searching for the 13th bloodline to sit at the table, so it seems they are one short wonder what that is all about.

Also your video is not working...

They are not what you would expect,, they are "masked" as regular people, chances are, that you interact at least with one of them, maybe more, in your everyday life.

I remember reading that thread a few years ago. Fascinating.

I managed to embed it.

Oh boy another one of these threads!

Did you know they control the world through triangles in music videos!?!?

Seriously though if you hear a whispering voice you should see someone, that ain't right and is generally an indicator of schizophrenia.

Bit out of date now all the same.

No need to do that. They aint nothin to write home about.

Just stay humble, pray and talk to Jesus, and work hard.. and you will be fine.

Yes, working hard as a wage slave and talking to anthropomorphized imaginary sky Gods is the obvious answer.

"They" want you to have a modest to low estimate of your importance aka humble.

That's one of the reasons that the status quo remains the same, and just one of many control constructs TPTB wield against us, then there is your organized religious practice, that old chestnuts rather fantastical.
edit on 21-9-2019 by andy06shake because: (no reason given)

They really don't want any part of what that final Seat has cooking...believe me....lol.

True pure Leadership cannot ever exist unless it is catalysed by a duality that has been broken....initiating the need to grow again and heal the wound....a need to develop a ROOT.....the number 12 represents the duality to some and the number 13 represents the perfectly balanced splitting of the duality.

To the holy light, from the true God of mercy, compassion, and love.. I will stay humble to.

To their God of tyranny, anger, and hate.. I will not humble myself to.

Nice, LoneBird, I perfectly understand what you're saying, however for completeness sake, the Holy God is One that is full of mercy and love and at the same time He is an angry and a punishing God. It's good to keep both sides of Him, the beautiful and the terrible, in our minds.

There's no other God besides Him.

Would that not just depend on which testament comes to hand?

Mercy, compassion, and even love are very Human constructs.

If God is looking for humble subjects willing to lavish devotion and attendance in spades, he is not looking for an equal, but looking for slaves, just like all organized religious practices funnily enough.

But it certainly begs the question, why create us in his image if he does not wish us to seek at least parity?
edit on 21-9-2019 by andy06shake because: (no reason given)

posted on Sep, 21 2019 @ 09:33 PM
link
I love how this turned from seeking out answers and illuminati to Jesus and God like I get it "God is Love" and all that.
But why does every religious person need to stick God or Jesus into things where no one asked them to?

If you want answers you're going to have to do your own research on such a secret society. Starting with their history. They are aristocrats and the name "Illuminati" is just an overused Internet/Hollywood coined term. You have to be born & breed into it.

The term Illuminati, is the plural of the Latin, Illuminatus, meaning "one who is illuminated." Thus, it means a person who has received the full extent of the initiation that is available through Freemasonry.

They have many names belonging to a dozen different secret societies. They are masters of infiltration on pursuing their insatiable lust for wealth & power. They worship Mammon (Beelzebub > Baal), not God.

The orgins - One of the best history threads on ATS is All Roads Lead to Rome. 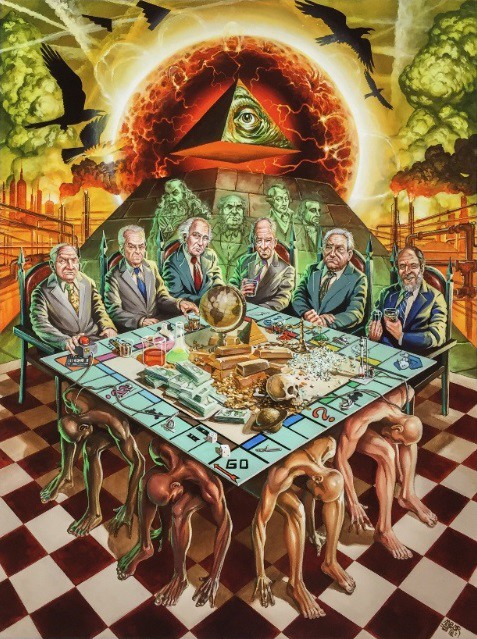 Here's a labrynith of info...
The Illuminati - Order of The Illumined Wise Men