posted on Sep, 8 2019 @ 02:36 PM
link
I've lived in Seattle for most of my 50 years, and cannot remember ever having experienced anything like last night's lightning storm. Although I've been in the middle of some extreme weather before, I've never felt so in awe of the display of power Mother Nature put on. The strikes were continuous for about an hour, but went on for nearly three. One strike hit particularly close to me, I guess within 2 or 3 blocks, and I felt the rumble in my bones, the windows rattled and all of the power in the neighborhood went out when it hit. It was like being in a dark room with strobe lights surrounded by guys waving around arc welders. And the noise, just incredible- it sounded like a war going on, not just the explosive booms, but the whooooshing noises were just crazy. 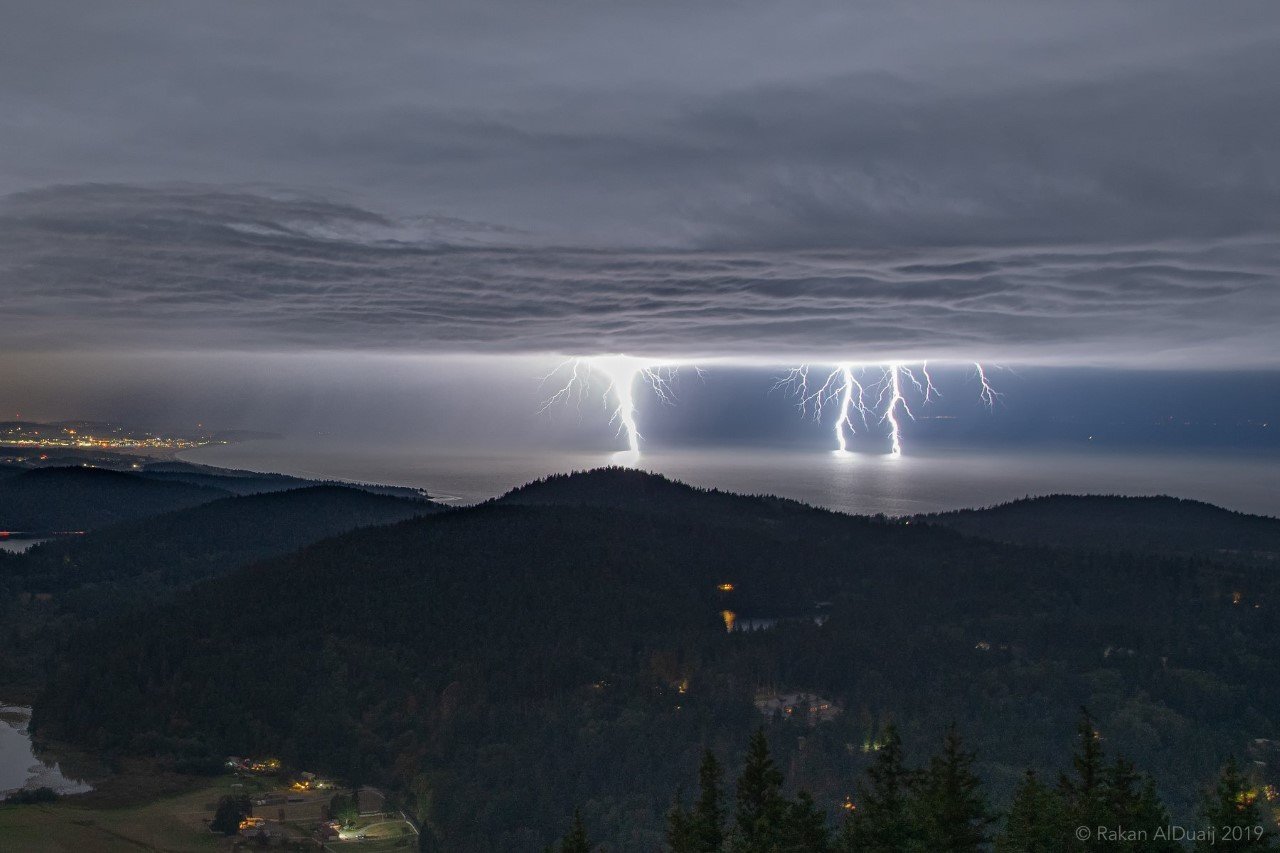 The event was a little bit unsettling because it went on for so long and was so intense. I felt as if I were on another planet, or in a dream- and could feel the hair on the back of my neck tingle a bit. I brushed away this slight anxiety and just tried to enjoy the show. It was amazing!


The NWS says 2,200 strikes were recorded across the Puget Sound, though no injuries have been reported and storm damage has been minimal. The powerful storm swept across the region around 6 p.m. and knocked out power to thousands. The storm even delayed Washington’s football game against California for over two hours.


Taking look back at last night between 6 pm and 11 pm in Western Washington estimated number of cloud to ground lightning strikes...2200. That works out to an estimated 440 an hour and 7 to 8 a minute. 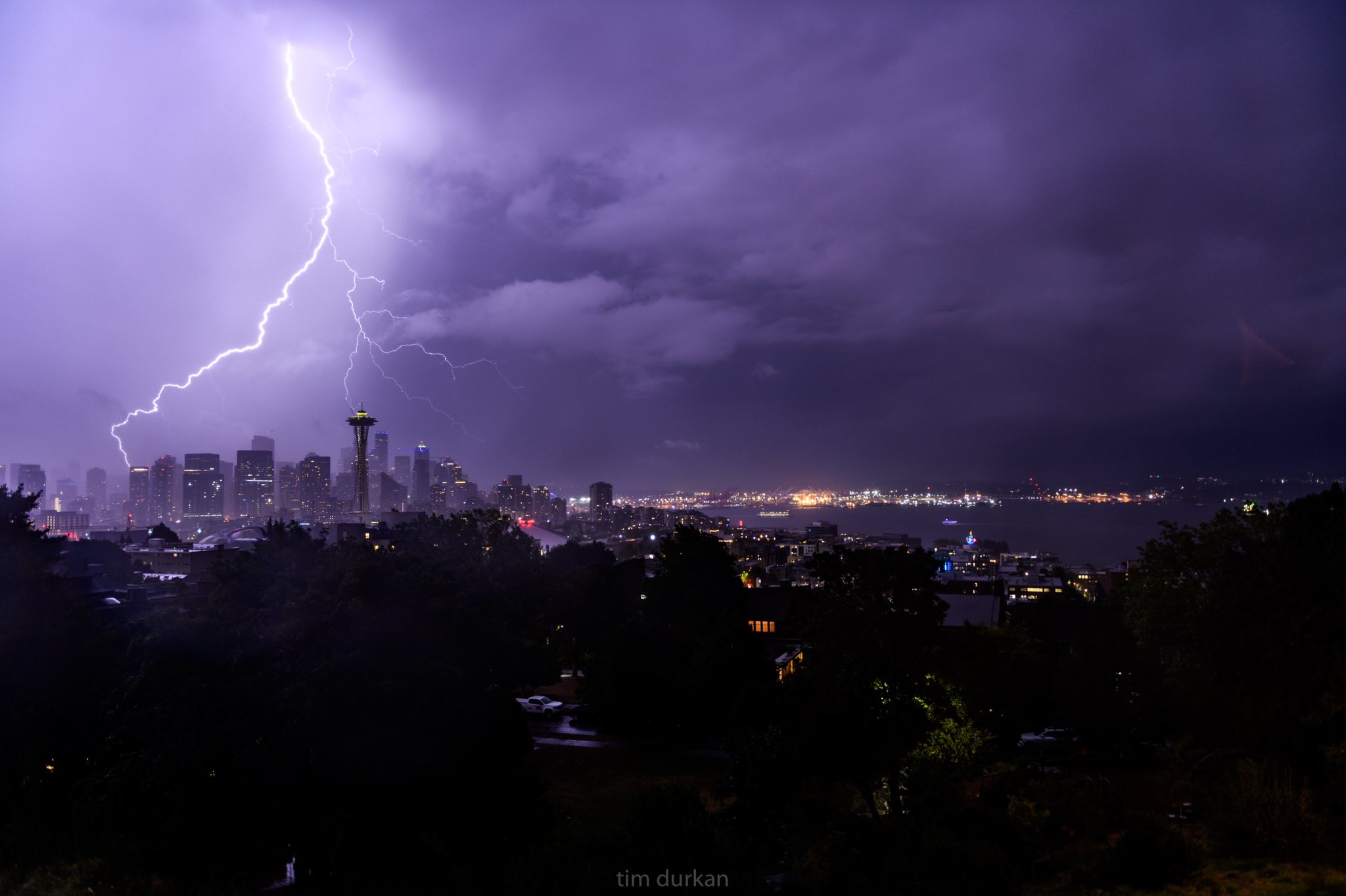 posted on Sep, 8 2019 @ 02:46 PM
link
A lot of energy is moving through the crust in an event like that. I wonder if there is a quake in the near future in that area of the country. Energy from lightning goes either up or down, triggering sometimes from the ground. Both ways can energize the fault line if one is present, but it can also cause a lessening of the energy build up at the fault line too. I doubt if it can really be used to judge anything.

posted on Sep, 8 2019 @ 02:56 PM
link
Up in Bellingham last night, was pretty heavy. It's been over 40 years since I saw lightning like this here. Before 40 years ago it happened every year almost.

posted on Sep, 8 2019 @ 02:58 PM
link
I thought it was a lot of fun. The cats didn't like it, but I did. Olympia and Tacoma got it a lot worse than Seattle did. I've lived here 70 years, and though rare, I remember quite a few lightning storms in my youth.

posted on Sep, 8 2019 @ 03:02 PM
link
Well, I did check and found an article addressing what I had said when I searched on Physics.org

I guess you do not even need clouds to have lightning.

Hell yes Washington state gets it's share of lightning.
2016 4th of July Spokane
Bar hoping all night in my partners Hell Cat. cruise'n those city
streets pouring rain and I mean vicious lightening. The DJ on what ever
station we had go'n. Was right on time with this.

Good god what a blast!

I live on the 25th floor of a tower in SLU.. the show I got last night with my giant windows was INCREDIBLE! Turned off all the lights and enjoyed...


Living in Florida has been obvious to me for a long time. The upper atmosphere is a positive charge and the ground or surface has a negative charge. When clouds get high enough they complete the circuit and lightning happens. Moisture being a conductor helps this process. this is also why you only get lightning from the taller clouds. this is also why radio towers in such get hit so often it's easier to complete the current.


My best pal in the navy once came to Saint Louis with his then future wife who had only been to Washington and Oregon in her life up to that point. They came here in May which is pretty much peak thunderstorm time in Missouri. One evening I had to tell her to come inside because she was bewitched by the lightning and thunder. I was afraid she would get struck by lightning if she didn't get inside...She said it was the most beautiful thing she had ever seen in her life up to that point.

It was funny to me because I really didn't understand. That is normal here.

Also once when we crossed the Missouri river on Highway 40 from Saint CHarles to Saint Louis county they both were wondering what the name of the lake was that we were crossing.

posted on Sep, 9 2019 @ 09:59 AM
link
That one video was interesting with how long the bolts lasted I have not seen that before. I do remember thunderstorms when I was a kid that were worse than what I have seen as an adult though.

originally posted by: Fools
a reply to: Fools

I was here when Mt. St. Helens erupted (May 18, 1980) - I walked to the top of Queen Anne Hill and snapped a photo of the Space Needle with the mushroom cloud from the volcano in the background. A couple of years later I got to fly over the devastation in a small plane and it was like gazing upon another planet. I also lived in Eatonville, at the very base of Mt. Ranier, but I was more afraid of the tweaker neighbors and bull elk than I was of the volcano.
I'm pretty sure that if Mt. Ranier erupted it could wreak havoc on Seattle with ash and possibly toxic gas, but people wouldn't immediately die within the city limits. There are, however, many small towns and the city of Tacoma that are in much closer proximity to Rainier. Lahar warning systems have been in place since the mid-90's, because people in the area might have as little as 40 minutes to evacuate an area. To the north of Seattle we also have majestic Mt. Baker, yet another active volcano that may decide to wake up one day! 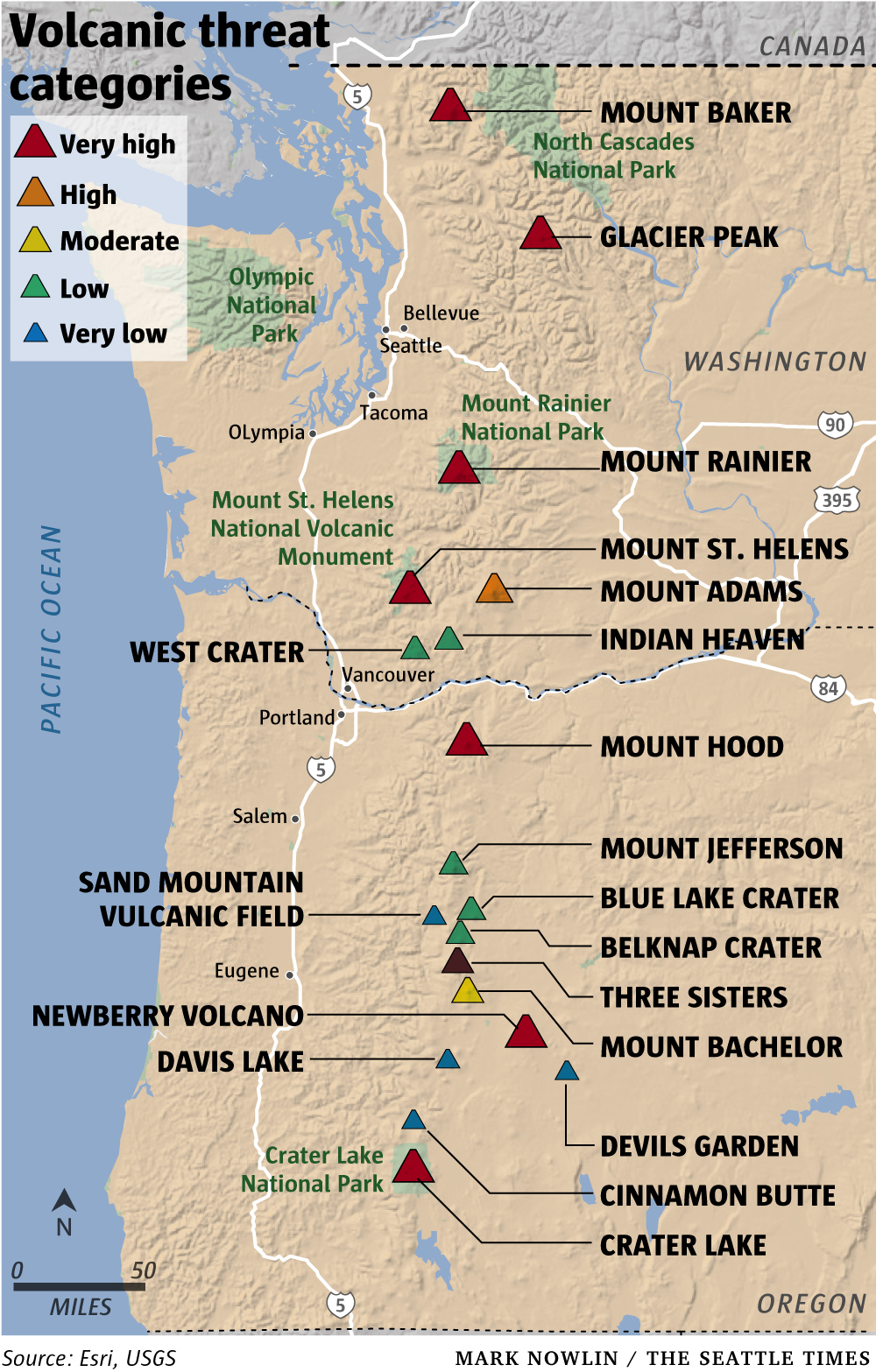