There long section in his report where he discussed why the Penthouse stopped at the upper floors.

Why did the evil US government, use magic silent explosives, on the 45th floor, to blow out the columns supporting the penthouse letting it fall ? Then they magically stopped the penthouse on the 45th floor for some reason? Then they used even more magic silent explosives to evaporate 8 floors somewhere in the lower part of the building so it could accelerate at free fall.

What was the purpose of dropping the penthouse a few floors 6 seconds before the rest of the building. Can you explain it?


This is the north face, east side corner, floor design layout. I have flipped it for you to see it. It has the core columns and exterior columns

I created a smaller screenshot, to help. I can see why the Kink there in actual videos of the collapse.

The failing, eastside corner exterior columns, caused this kink underneath the Penthouse.

The Penthouse failure, occurred, when the core columns in the heart of the building failed first
The building can't come straight down, as it did on 9/11, till the side exterior columns fail.

NIST theory is the exterior columns collapsed first- and then the adjacent columns across the building gave away. The NIST progressive collapse was split into two parts, the failure on the eastside, and the next row of failures occurred in the middle, and at the westside corner wall. 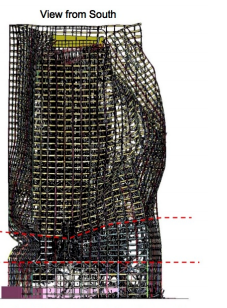 Failure of columns at the bottom floors would not cause the Penthouse to fail, it would tilt the building to the east. There no basis to believe that's possible. NIST left the girder at column 79, unsupported to allow its collapse due to fire- that suspect right away, still for some reason you guys think thats ok?

Hulsey even showed here they left off the bracing- the support beams to allow adjacent columns to fail.

This is Hulsey look at the connections there in the building.

This is the NIST version, care to explain it? NIST stance was the support beams don't exist. 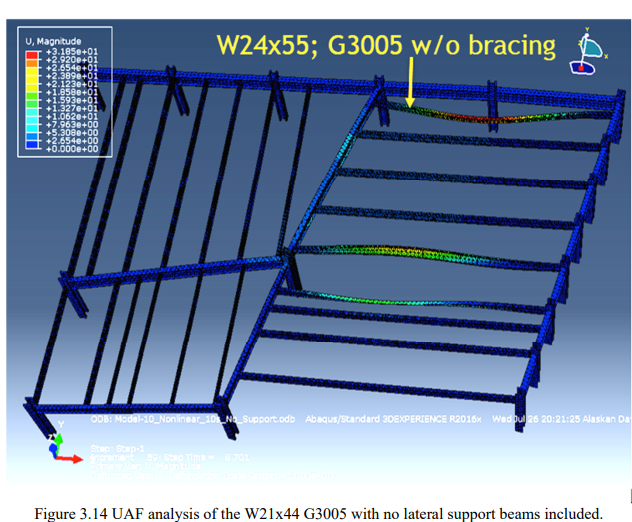 
Hulsey debunks
NIST thermal expansion movements for the girder at column 79. NIST has the girder slipping of the bearing seat going in the opposite wrong direction!

UAF research team found the exterior east wall was not fixed- it was actually flexible. If you disagree with this Hulsey find, show us where NIST said the wall was flexible.

Let us not forget NIST stated there were no shears studs on girder A2001. Court documents have shown this to be not accurate
NIST analysis, the lack of shear studs caused the girder at column 79, to not have sufficient lateral support ( big issue there)

NIST- fire-induced weakness of columns did not cause a collapse ( page 623 of NIST report)
If you believe fire caused this progressive collapse, then a girder failure is the initiation event.
Buckling of the columns did not initate a collapse according to NIST.

2x26 side plates, NIST also omitted left them off at column 79. Plan drawings for WTC7 show the side plates. Why did NIST decide to leave them off?

They also omitted the bracing for the building ( north face eastside)
Bearing stiffeners were also omitted.

Demand this to be so, ask for direct response and acknowledgement in

1. a PDF or Word document with constructive comments intended to further the analyses and presentation of findings contained in the report.

2. Email this PDF or Word document to publiccomment@AE911Truth.org

Do something neutronflux.
edit on 7-9-2019 by democracydemo because: - extra DIV

This is what was asked of you.

So no crap Sherlock. If you make columns disappear in a “model” the building is going to fall.

One. That is not even real world. In the real world... When columns are cut by cutting charges, they are often used with a kicker charge to misalign the cut column. Is that false? To prevent columns getting hung up. Is that false. So, to make columns just disappear is not indicative of any real world situation.

Two. Can you cite which Hulsey animations are computer created from modeling data vs manually generated animations.

The Hulsey project is useless. It only models a couple of floors with static fires, ignores at least seven floors of traveling fires, it uses a totally unrealistic scenario of just removing columns, the Hulsey free fall model is based on no actual observed mechanisms, the Hulsey free fall modeling does no match important collapse features from the video evidence, and you cannot cite which models are computer interpolations of modeled data vs manually animated.

How? I thought the truth move keeps claiming the NIST model is ”secret”? Until I guess it’s not?

Ok? Now name one mechanism in real life thaw would cause all the columns to disappear like in Hulsey’s model? What are people exactly going to comment on? Hey, if you manipulate manually drawn graphics enough, ignoring actually events at the WTC, you can make an animated model fall the way you want? Genius?

It's obvious you not intelligent
Its obvious you have not understood engineering
You also repeated the same questions- answered already
How come you not banned already?
Last post answering you, it waste of my time/

So. No modeling of floor connections by Hulsey then?

Did Hulsey model any type of floor connections?

Maybe if you actually quoted my questions and addressed then one by one instead of trying to shotgun the answer with long posts that really has nothing to do with what actually was asked?

Let’s start with the video, audio, and seismic evidence? What mechanism is there evidence of that would make columns magically disappear as modeled by Hulsey’s manual animations?

Until somebody can explain how it was reported that the building had fallen 30 minutes before it actually fell on live television, I am not inclined to believe much of anything that any report has to say. Talk about ignoring important points...

and yet its been explained over and over and one can even use their own ability to think and make reasonable assumptions as to how or why it was reported 20 minutes earlier.

Yes ignoring important points and ignoring ones own ability to think is a real issue concerning conspiracies.


How come you not banned already?

have you reported them to the mods for not being intelligent?

apparently that a serious breach of the T&Cs, get to it and do your ATS duty and report the dumb ass posters for being dumb

maybe you should so all these dumb posters can be banned.

Mick is a charlatan character, the owner of a crappy online debunker forum " Metabunk.,.
edit on 10-9-2019 by Jesushere because: (no reason given)

originally posted by: Jesushere
Mick West exposed as a fraud and liar.

Thought this was of interest

Mike knows what he has now in his conversation box. I drop here tomo if he does not know make a post about it!!!! We discussing things in private email
edit on 11-9-2019 by Jesushere because: (no reason given)

And here is a building of superior design than the one above
collapsed by W/E.

Anyone who refuses to acknowledge the difference isn't being honest
with themselves.