posted on Aug, 27 2019 @ 07:40 PM
link
Today, at 5 p.m. CT, SpaceX's Starhopper successfully reached a height of 150 meters, before descending back down to it's launch pad, located in Boca Chica Beach, TX. A test flight was scheduled for yesterday (August 26), but was scrapped due to the SpaceX's Raptor engine failing to ignite. There had been two other failed tests back in July. On July 24, a test flight was aborted due to the rocket belching flame and smoke and on July 16, a Raptor engine test resulted in a brilliant fireball.

This past weekend, residents in Boca Chica Village, Texas, received a warning from the Cameron County Office of Emergency Management, stating that the test flight of the Starhopper, on Aug. 26, could break windows in their homes. I guess SpaceX officials were a tad nervous and decided to err on the side of caution. I think that was a good call. 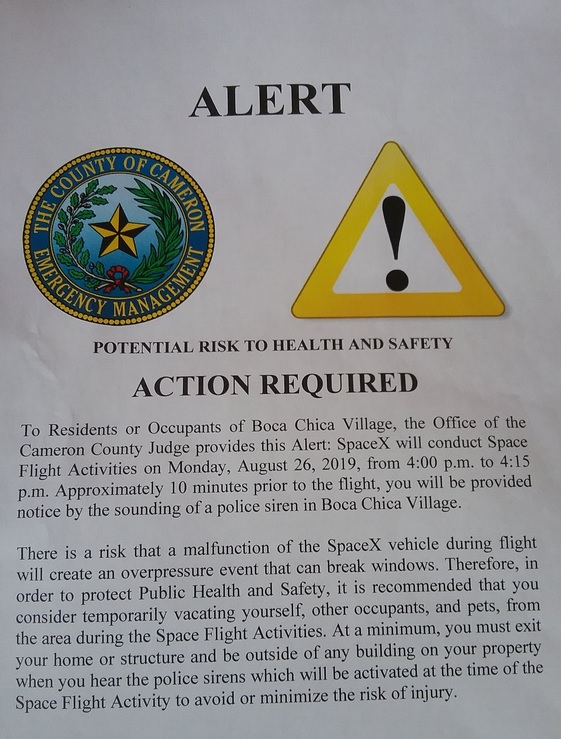 
July 24 aborted test due to flame and smoke:

Looked kinda hot to me.

And that was with just one engine!

originally posted by: Saint Exupery
Nothing revolutionary, but a good test for new equipment.


@OP: Are you sure about the Raptor engine failure? So they scrubbed yesterday and replaced the engine in less than 24 hours?

The live stream I caught didn’t move the camera in time to catch the last 10 seconds of landing.


originally posted by: Saint Exupery
Nothing revolutionary, but a good test for new equipment.

Yes, and when they do that, I will cheer. However, this Starhopper test didn't do anything that the Delta Clipper did better more than 25 years ago.

The NASA takeover of the DC-X project was a travesty that delayed the "revolution" by a quarter-century. Fortunately, the same spirit (and a lot of the same people) work on at Space-X and Blue Origin. I wish them all the best.

posted on Aug, 28 2019 @ 02:12 AM
link
The last one I wanna see in black and white. Basically I think it's what they want the public to believe is the current state of the art. A decoy nothing more the real stuff has to be so much more advanced.

They'd only have to replace the engine if the engine was the failure point. It could have been anything along the command loop to the engine that caused it to not ignite.

Gotcha. I walked in the door Monday and started the stream, spending the next 75 minutes waiting with the stream hosts not bothering explaining why it was scrubbed. I guess the term “Raptor engine failure” connotes something closer to the engine being the failure point, as opposed to scrubbing due to “ignition failure/failure to ignite”.

At any rate, I thought I’d give that stream a view and like and maybe stay away from the SpaceX stream but they bungle the landing (yet to see it)...no good deed goes unpunished.

The hosts were talking about the Florida launch sites and the trouble assembly and testing of the larger starship may prove to be considerably hamstrung when they do get to Florida. Never thought of it and not entirely sure the context but they believe it’s being overlooked and will prove to be problematic. Any insight(s)? Was the Starhopper cradle-to-grave in South Padre??

What’s the story on the DC-X? The wiki you linked insinuates a fairly minor failure — a subsequent leak caused a fire leaving prototype unsalvageable — ended the program in favor of another failed program, leaving proven (I’d assume it would’ve bent the cost curve just as well) technologies mothballed. Maybe it is that simple but where’s the fun sans conspiracy? Any to proffer??

posted on Aug, 28 2019 @ 03:08 PM
link
a reply to: Cravens
DC-X was a victim of the end of the Cold War. It was intended to support Reagans SDI effort, so it lost its mission after the Soviet Union fell apart. The program was transfered from the SDI organization to NASA but they killed it at the first opportunity to protect the X-33 SSTO effort.

Huh, that’s what I get for relying on wiki.

supposedly tens of thousands of people watch this 'flight' live in texas, yet only one identical vid cut is available on YT, across dozens of uploades.

have we forgotten what real takeoffs look like? The Challenger; not that the crew were witnessed inside.

here all they're seeing is pricey firework rocket shows likely with their tax dollars.

Yes, there were tens of thousands of people in the middle of nowhere in Texas, to watch a rocket go a couple hundred feet into the air. Give me a break. There might have been tens of thousands watching online, but they sure as hell weren't there in person.

yet from the Comments:

10s of thousands of people watched it in person, so can’t say was just a fake video, 1000s of videos taken. Even you could have went or go next flight. That you think fake just shows how stupid you are?