originally posted by: Lumenari
So the most that will happen to her is that she will be fined (like what happened with Obama's multi-million dollar campaign spending fiasco), the left will throw a party for her and she will receive some awards.

Nah, she likely won't even be fined thanks to Trump.

Vice Chairman Matthew S. Petersen (R) of the F.E.C. just stepped down leaving only 3 out of 6 members left when they need a minimum of 4 out of 6 to vote and enforce such campaign finance laws.

Aren't you glad that Trump hasn't done his job to appoint members to the F.E.C. getting them back up to 6 members in a timely fashion so that they could weather this step-down and do something about Ilhan Omar's possible infractions?

Gee,I wonder why Trump wouldn't want the F.E.C. to be able to enforce election finance laws? 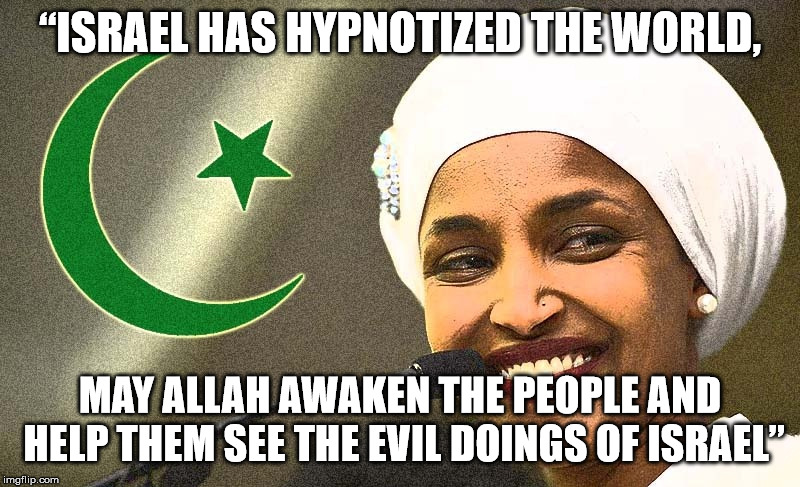 
Who do you consider "you people" ?
You mean the informed folks ?
You do know that Omar is connected to radical Islam , yes ?
By her own words , acts , and donations .
You really do not research before you post , do you ?
And , the use of "Wtf' really does not make one appear informed.
It has the opposite effect.

I am sorry, you cannot post a comment and include a meme about her antisemitism on a thread about her corruption?

That's her thing, whenever asked a question she will say "I won't dignify that with a response" but in the same breath goes "blah, blah, blah", she never actually stops talking after she refuses to answer a question that offends her, which apparently every question offends her. Wild how these infidels think she should be questioned at all.

I learned a along while ago not to place my faith in Democrat politicians. Down the line they have fallen to skullduggery and sexual impropriety. Does that mean i now like Trump?

It would be odd to 'like' Trump. He's a brash NY billionaire. There is not much to like.
The support for Trump has never been about liking the man, it's about standing against the truly evil and dangerous road the Democrats have gone down, starting with Obama. Defeating Progressivism once again is the common cause for people who actually care about humanity. Our ancestors beat the same evil in the 1940's. It's our turn to do the same.

She's always just a "stone's throw" away from punishment 😃😃

I take it that the stones thrown would be for the punishment for Islamic adultery?

We keep being told that we have to respect Islamic culture. I've got several nice granite pebbles picked out.

So, to some degree we agree on Trump.
But I see from your mentioning of the 1940s that ''your'' ancestors beat down ''my'' ancestors who were not evil but rather working class people who were fed up with the wealth and power that were garnered for the rich off of the backs of the working class. My grandfather was a dock worker in San Francisco during the General Strike of 34 . Both he and my grandmother voted for Eugene Debs and his presidential campaign while he was in prison.

They were good and proud people who had been raised by parents who had known the excesses and consumption of the Robber Barrons of the previous century and understood that people like that would never give up their power over society with out the binding together of the working class.

They had witnessed first hand the Crash of 29 brought on by the unregulated spending frenzy of the market and the poverty that came in it's wake. It was not socialism that caused that crash but rather the unfettered excesses of capitalist selfishness.

So while you may see my ancestors as ''evil'' I see yours as regular people who likely suffered just as much as did mine yet took their oppression a bit more meekly. But maybe maybe not.

To your notion that defeating Progressivism being a common cause for people who actually care about humanity I would say that this is true. People who believe that progressivism is the problem. There are likewise people who care about humanity that find that defeating the soul killing aspects of the status quo and those who defend it, conservatives is the only way to serve humanity.

I subscribe to neither. I have, in the past, subscribed to both philosophies. But now, neither.

From your standpoint it appears to me that the Democrats are on a dangerous path. Well, to me not so much, This push to more progressive postures is not new. The rising of progressive or very liberal candidates back in the 60s and 70s petered out as some of the conservative values turned to neo-liberalism which is not liberal or socialist but rather just conservative capitalism growing up and developing new markets to exploit among previously marginalized peoples. The opening of new markets created jobs and the early 70s ''Greening of America'' turned out to not be the liberal cause it was feared to be. Just more markets and more consumers.

So, having been a fundimentalist and having been a Marxist myself, I don't see Obama and Clinton and all those others in tha gang as socialists, just neo-liberals doing their best to keep capitalism alive and thriving here in the US and around the world. The threat of One World Order or Globalization is not a socialist threat, but rather the logical extension of world domination by the forces of capitalist corporations. These wealthy dudes who own these huge combines of services and products and media control? Not socialist at all but rather quite a bit more like the Robber Barons of old.

Hold her to higher standard than the president?

Please supply a list with incontrovertible proof of every law broken by Trump. Hell, I'd settle for one. ONE. Should be easy since he gets away with everything.

As far as I know it isn't against the law to cause liberal hissy fits.

Saying israel does evil is anti-jewish? Keep drinking that kool aid. It's a dumb meme and serves no purpose. Should the anti trump people in ATS just spam dumb trump qoutes thatcare unrelated to the topic?

So what? So you feel that in your view Trump is bad she can steal and cheat?

The idea that Jews "hypnotize" people is an old and common anti Semitic trope, keep being ignorant.

Have any other freshmen elected officials paid near that much in consulting in total?

I depise this women, but I have no control over the face she was born with.

Beauty is in the eye of the be(er)holder.

attack her position and actions, not the person.