We moan about it, we see it everyday .... Time to put MSM on notice ...Shall we stand United ? I think so.... Time to get Mad and end this fake news fiasco

WE KNOW THINGS ARE BAD….

BUT THERE IS SOMETHING YOU CAN DO ABOUT IT!

JOIN THIS BOYCOTT AND SEND OUT SOME PETITIONS.


The FCC occasionally receives complaints regarding allegedly false information aired on TV or radio. The FCC reviews all complaints for possible violation of its rules, which are narrow in scope.

The FCC prohibits broadcasting false information about a crime or a catastrophe if the broadcaster knows the information is false and will cause substantial "public harm" if aired.

FCC rules specifically say that "the public harm: must begin immediately and cause direct and actual damage to property or the health or safety of the general public; or divert law enforcement or public health and safety authorities from their duties."

The FCC is prohibited by law from engaging in censorship or infringing on First Amendment rights of the press. It is, however, illegal for broadcasters to intentionally distort the news, and the FCC may act on complaints if there is documented evidence of such behavior from persons with direct personal knowledge. For more information, please see our consumer guide


Watch the Water ... nestle and the Swiss

.....What is happening in Switzerland is just the tip of the iceberg – the visible part is the international articulation of big corporations, and the taking over of public space for political decisions by the world corporate oligarchy. We have to be vigilant and well organized to defend our waters, our earth and our society from the corporate attack on the common good….Globalresearch.ca

Moving $3.6b from a $716b ANNUAL DOD Budget is nothing. Nancy and her buddies from the Island of Misfit Dems act like the Military shut down all Ops to assist with border security.

Killing NAFTA + getting the new Cañada/Mexico deal together along with getting Mexico to step up border and caravan security on THEIR side of the border IS getting Mexico to pay. Dems and Fake News think his supporters expected a check for $20b from Mexico, lol.

What the Trump supporters DID NOT expect;

No, the Trump Supporters see the Dems and Fake News AS the Swamp and Deep State.


Thanks for posting that! Don't think I've ever seen it transcribed like that.

I never tire of hearing it.

Next will be Water Wars if these evil psychopaths get their way. Things could get ugly.

Trump is a genius. 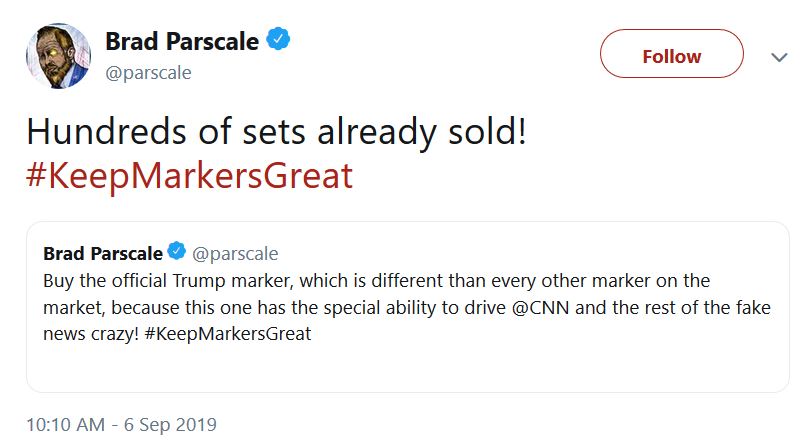 
Epik CEO appears to be on our side, part of the Q team.
Browse through his Gab tweets.

As many folks here know, Epik has been developing a series of new platforms including Anonymize.com, Armored.net, Us.Tv, Watchmask.com, and more on the way.

Epik has been developing an Anonymous Smart Search aggregator. This new brand is intended to power an alternative to Google.com, Bing.com and DuckDuckGo and censorship-light search engine."

It will be called Toki - Toki.com -- new project under way


The Foundation will also be a bridge between the scientific and diplomatic communities, hence its strategic placement in Geneva, which houses several international organizations, from the UN to the World Trade Organization.

Yes, I caught that and just had to shake my head in disgust. Water wars not here yet but, this is definitely a "Watch the Water" case if I ever seen one.

Templars and their base of all evil. The Swiss luv their money and everybody's else's too. Swiss come first and ALL others come distant second.
7 Presidents or 7 Heads. Neutral my arse.


...These researchers chose Switzerland because it's a neutral country so charged particles should have no effect. A Black Hole created there may consume the rest of Europe or even the entire solar system while leaving the Switzerland intact. They think they're safe.

This entire phenomena has been known for decades but most studiously ignored by the demented experimenters at CERN. The letter above was written to U.S. President Calvin Coolidge by a group of scientists urging the development of the ultimate Death Ray. President Coolidge refused to fund the project so this cabal of reckless researchers moved their labs to Switzerland to continue their work in secret.


Switzerland is primarily a destination and, to a lesser extent, a transit country for women and children trafficked for the purposes of commercial sexual exploitation and forced labor. One NGO reported that roughly 50 percent of the trafficking victims counseled in Switzerland came from Eastern Europe; 27 percent were from Latin America; 14 percent were from Asia; and the remaining nine percent came from Africa.

The Goldwater is the editorial site owned by Jim Watkins.
twitter.com...

The flag pic in his twitter feed for some reason reminded my of Q3193.

Not picking on you . I swear ... First link in my signature... Lurkers not signed in .. oh well


According to Tom Riedel, the former president and current secretary of Watkin's company, N.T. Technology, Brennan and Watkins formed a business partnership.

"N.T. Tech provided the domain name and hardware, [Brennan] is responsible for software and growing the community," said Riedel by email. "Right now it doesn't make enough to pay for itself, but hopefully someday it will."

what to make of this ?

edit on 962019 by MetalThunder because: Hmmmm


Not here for "stars"
Lol


Pssst look at my avatar .... Sharpie make sense lol
God bless... Why is the queen always so quiet ? God bless America
edit on 962019 by MetalThunder because: F&#k google


originally posted by: Creep Thumper
Why in the world does a medical facility need a cyclotron?

I think that's a terrible idea.

there are little mini cerns located in hospitals across the globe!

There’s a lot of gaps to fill in

Just a rough draft of mine.

Reason? Our own now-departed Justvistin knew - the particles like her agent orange and many other things, travel through the family tree altering DNA with seemingly no related reason after just one generation.

Looking at the Merk manual from 150 years ago is REALLY revealing - this "medicine" would have been seen as obscene. Now folks beg for it.

Ionizing radiation is pure evil on every single solitary level.

originally posted by: SKEPTEK
Pocahonta... I mean Elizabeth Warren is tweeting about dogs.

Pretty desperate state she must be in to try to play the dog sympathy card.

i noticed that she went with a nice BLOND lab and not a BLACK lab? Uhm likely racist

I knew from some past article I read that 8ch was about to collapse due to lack of funds. Jim's stepson Ron convinced him to buy it. Jim had the money and infrastructure. He hasn't made any money off it and not sure he cares. His main source of income is www.books.audio. He narrates some of the books which you can listen. I think some are free.

I'm not sure what to make of the partnership with traitor hotwheels given the obvious recent events. I assume partnership implies Hotwheels is part owner so things could get messy.

This is interesting. ThinkProgress is basically shuttering. They are reportedly going to lose $3M this year.

Wasn't there a story about how several "news" organizations were laying off people en masse all around the same month? And people had found an EO or something else from the Obama administration that had $X budgeted and allocated for a set time period (16 months? Hazy memory) which just happened to coincide with the time between the funding implemented and the layoffs starting?

Interesting how such a well-known and otherwise successful group could find itself losing $3M a year. Gross mismanagement or maybe they, too were built to rely on said funding?

On February 1, The Hollywood Reporter reported that Vice Media would be laying off 10 percent of its staff, or approximately 250 workers, as part of a reorganization effort; just hours later, the Miami New Times reported that McClatchy, which operates newspapers across the country, had offered voluntary buyouts to 450 workers. These reports come just one week after Verizon (which owns HuffPost, Yahoo, and AOL) laid off seven percent of its staff, including Pulitzer Prize-finalist Jason Cherkis; BuzzFeed cut 15 percent of its workforce, decimating entire verticals; and the Gannett Company, which owns more than 1,000 daily and weekly newspapers across the country, eliminated approximately 400 jobs.

In sum, that comes to at least 2,100 jobs that are either eliminated or will be soon...

For decades, a so-called anti-propaganda law prevented the U.S. government’s mammoth broadcasting arm from delivering programming to American audiences. But on July 2, that came silently to an end with the implementation of a new reform passed in January. The result: an unleashing of thousands of hours per week of government-funded radio and TV programs.

In other words, propaganda.

Prior to lifting the ban, programming created by the Broadcasting Board of Governors and distributed via outlets like Voice of America and Radio Free Europe/Radio Liberty could only be listened to or watched in foreign countries. Those restrictions were implemented under provisions of the Smith-Mundt Act, also known formally as the U.S. Information and Educational Exchange Act of 1948, a piece of legislation that authorized government propaganda activities (often referred to colloquially as “public diplomacy”).

The act was “modernized” in 2012 and passed as part of the 2013 National Defense Authorization Act.

According to Jones, provisions of the act expired last week, ironically at the same time that mass layoffs across what can only be described accurately as Left-wing media companies. He theorized that the U.S. government, under Obama, authorized funding that went to many of the media outlets now laying off thousands of reporters.

The funding effort was apparently reintroduced in November 2016 — just days after POTUS Trump defeated Democrat Hillary Clinton — by Sen. Rob Portman (R-Ohio), who introduced a provision included in the National Defense Authorization Act of 2017 for $160 million “over two years,” according to VOANews.

Ah, so this is what I was thinking of. Story apparently started with Alex Jones, so maybe it's garbage afterall. Funded for two years in November 2016; early 2019 sees mass layoffs. Curious, no doubt.

Also the money is allocated to "counter foreign propaganda." Well, what did the media go head -over-heels covering nonstop for two-years? Russian trolls and propaganda "influencing the election"... Doesn't that completely match the reason for the allocation?


Still seems very odd to me that a group like ThinkProgress could find itself spending $3M more than it is bringing in in revenue within a year. Unless it had been built on revenue streams which have since dried up.

ETA: Notice she has the dog on a leash.

For world distribution
F the MSM ... And the National weather service

Take a stand... Be counted

Can someone answer this question... Is President Trump's administration close to "flipping" the 9th circuit court by creating additional seats, and filling them with Republicans? 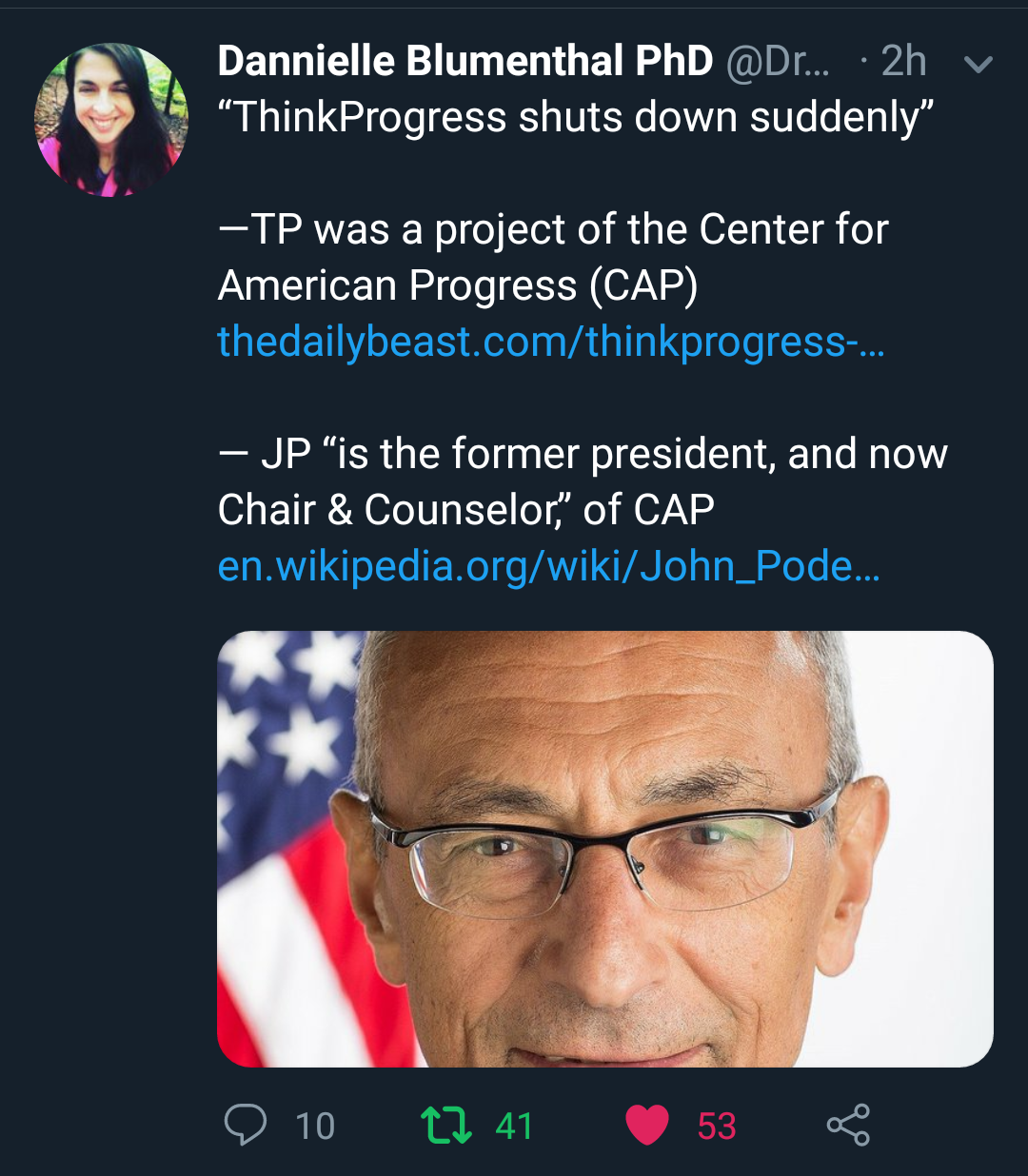