posted on Aug, 23 2019 @ 09:32 AM
link
Hey all! Just got my new EMAX Tinyhawk Freestyle. It.. is.. fun. Coming in at only 79 grams. (with battery) This toothpick style kwad really holds its own. Video is surprisingly good. The VTX is locked to only 25mw out of the box. But as you can see, I had no issues, even when behind several large trees. RX wasn't bad either. I got a few warnings, but no fail safes. Before I flew, I loaded up Betaflight and adjusted my rates. Other than that, this is it out of the box. Flight time is really good as well. 5min+ is easily achievable.

Due to the size of the drone, I had to record the flight via the analog signal going into my goggles. But it gives you an idea of its flight characteristics.

Here is a picture for scale. That is a normal sized BIC lighter next to it. 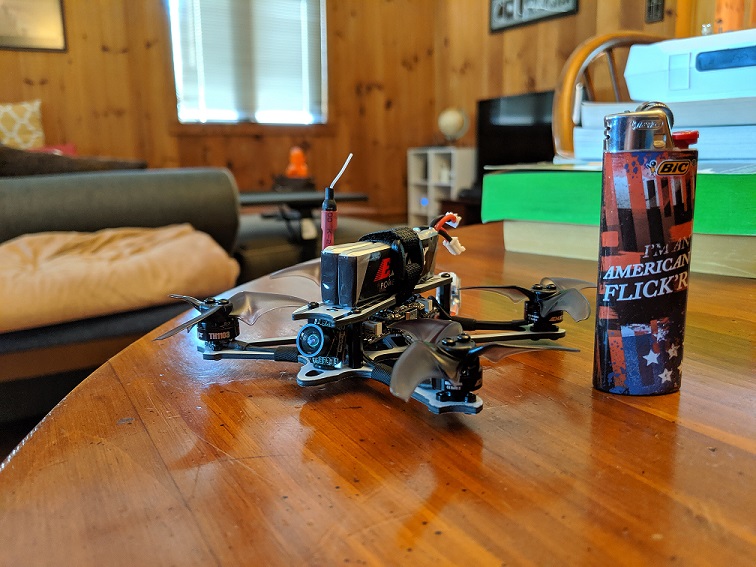 originally posted by: CriticalStinker
a reply to: Triton1128

To get the low latency you need to fly these, the video has to be garbage. DJI's that get 1080p work fine for cruising around but the lag time would make you crash on a racing type craft.

On this platform. Using a 450mah 2S, I get anywhere from 5 to 7min depending how I fly.

I agree with your statement about the DJI and lag. Fully Digital HD flying is still a work in progress. Plus its rather bulky. Ill stick to my analog equipment for a bit longer before I think about moving over.

I just picked up the new FatShark Attitude V5 goggles. They are actually really good. OLED screen make the colors super crisp. The DVR does it no justice.

posted on Aug, 23 2019 @ 12:52 PM
link
Never find that one if it crashes into the woods, I bet it could easily get lost in the grass in a field too. Maybe too small. It could crash here into the woods and get mixed up in the leaves. You might find it after you stepped on it

I have a lost beacon alarm set.

Say I ditch it into some brush. All I have to do is turn off my radio. As soon as it detects that radio link has been lost. It starts polling out beeps. Its actually quite audible. You can hear it from a good distance.

The only event in which that would not work, is if the battery's got ejected during the crash. But on this platform, its highly unlikely due to the size.

posted on Aug, 23 2019 @ 03:15 PM
link
Ok, I would like to turn this device into a homing taser. Can it hold enough charge to deliver a disabling electrical shock??
It certainly firs the size parameters for my taser drone request. How is the tracking software, can it follow a pre-programmed path??

I imagine these little drones flying above our heads, like personal scouts, sending us info back to our goggle glasses.
Send them ahead to see how long the line is at the theater, or to scope out to see if the are any hot babes or anyone you might know standing in line.