Apple releases credit card that's damaged by just about anything

Apple has finally rolled out its first-ever credit card, but the company appears worried that users will damage the new product before they get to use it

Apple has posted a notice for users online listing the many ways the card might be damaged. Fabrics, hard surfaces, other cards, magnets, improper cleaning

The company suggests storing the card in a “a wallet, pocket, or bag made of soft materials,” but rules out fabrics like denim and leather

Apple also instructed customers how to insert the card into their (non-leather or denim) wallets, carefully, “without touching another credit card,”

“If your card is placed close to a magnetic latch on a purse or bag, the magnetic strip can become demagnetized,”
Source
Actual Apple website source

I'm someone who is relatively into technology, which means that I do my research into products like computer parts or phones. Because of this, because of the fact that I look into technology and compare all the different products, I've hated Apple for most of my life, for many reasons. They have absolutely crappy business practices, like soldering RAM onto the motherboard of certain products so that instead of just replacing the RAM yourself, you have to either send the entire laptop in for an exorbitant "repair" fee, or buy an entirely new computer altogether. Most of all though I hate Apple because especially when it comes to their smartphones, the phones are, without fail, inferior to existing phones in just about every single way. What's more, Apple likes to introduce features and technology as the latest and greatest in the smartphone world, features that only Apple phones supposedly have, which their customers lap up - except these latest and greatest iPhone exclusive features have usually already been present in Android phones for years. And then they blatantly rip off their customers by adding massively inflated price tags on phones that I wouldn't even use for free, especially when they have a habit of shattering from so much as being dropped.
I could go on and on and provide technical specification comparisons, but the point is, they produce low-quality products while massively overcharging for them.

Well, now Apple has a new product out there - a credit card. It's not just any credit card though, it's made of titanium. It's probably super tough, right? Nope. Apple had to make a website to instruct customers on how to properly and delicately care for their new titanium credit card. For example, if your credit card comes into contact with the wrong type of material, like denim or leather - well, you have to make sure then that when you carefully wipe it off, you use a "soft, slightly damp, lint-free microfiber cloth" moistened with isopropyl alcohol. Oh, wait, I made a mistake there - denim and leather might cause permanent discoloration that won't wipe off. As for storing and carrying the card, that's a whole other nightmare. Now, obviously, leather wallets are out of the question. Who would even use such a thing? You have to store the credit card in a wallet made of soft materials, and make sure it doesn't touch any other credit cards. And if your purse has any kind of magnetic latch on it, that's a no-go entirely, because the magnetic latch might demagnetize the card and render it useless.
People are already poking fun at it, wondering when Apple is going to release their fancy high-tech credit card case for only $399.

I've had regular old credit cards my entire life that are made of plastic or whatever it is and I've never heard of such nonsense, but this is par for the course with Apple and the garbage they produce.

Thanks for letting me know at least. I'll take your word being an old computer dinosaur myself and won't get one.

Just because they think they can, doesn't mean that I will.

This is beyond ridiculous.. lol Apple credit cards.. ahhahaha

My son reckons the best credit card is his dad.

"Didn't I give you fifty last week?"

posted on Aug, 23 2019 @ 06:34 AM
link
I've observed a lot of poor people owning apple products. Again, this is just my personal observation but it has been fairly consistent.

When I use to work in an office, I'd see the most financially feeble minded people I have ever met with iphones. They would always complain about being broke but, had no problem buying an expensive phone, $5 coffee or eating out for lunch daily. I also notice some of my dirt poor in-laws same thing; all apple products. The only wealthy people I have met were stay at home housewives. Their husbands did not have iphones. The spoiled brat kids did though.

I do think they make quality products but I don't like being pigeonholed with technology. I said no thanks when I got an ipod as I gift and could not put my music on it from another device or, they made it cumbersome to do so. They'll get what's coming to them though. Same thing that happened during the eighties where they get greedy and drive people away.

posted on Aug, 23 2019 @ 06:35 AM
link
a reply to: trollz
Ok don't judge me but I have had credit cards since the eighties. Not the same cards of course lol but I have used these items since Ronald Reagan was president and I have never cleaned any of them.

Tell me I have spent decades harboring disease and filth in my wallet...

I mean did I really need to add yet another chore to the list of chores in my life?

Do any of you clean your bank or credit cards?
Other than getting rid of that glue that the sticker with the activation instructions leaves behind that is?

I need to know.
AM I a low life living this way?

PS My stove top shines like the sun if that counters....

I share your disdain for Apple. (And pretty much most all of the top tech companies)
These "visionaries" and their disconnect from logic and common sense is just bizarre. The garbage they produce is ample proof.

There was a time when standard operating procedure was to develope a prototype and work the bugs out through rigorous testing and carefully controlled beta release. (Especially with software.)

Over the years, due to greed, sheer incompetence, and a disregard for the consumers who actuaaly buy the products, we get crap like this joke credit card from Apple.

The tech industry provides some good fodder for comediens:

Don't worry... Apple usually looks ahead in cases like this to resolve issues.

I expect to see Apple® Wallet™, and Apple® Blue Jeans™ come out soon.

I'm sure the wallet will be reasonably be priced in the 300$ range, with innovative features like folding.

The jeans will probably be a little more pricey with things to sepperate them from the market like mini sacks, places you can store things.

So does that mean the gold cards are made of gold and the platinum ones are made of platinum?
And what about those exclusive black cards? Matte black with no identifiers.. what are they made of?

LOL yeah the bank of Dad... I remember having an account there.

Then I became the bank of Mom.

But take heart.... they eventually get jobs and their own money.

The quality of Apple's products continues to go down, while they keep jacking up the prices.

Their laptops used to have magnetic cords that would easily attach to your laptop - now they use these POS cords that are like a USB-C or something that easily break and short out.

They also DON'T EVEN INCLUDE a standard USB input on the laptops now, so you need to pay $80 or $100 for a freaking adapter just to use anything with a USB.

Then they got caught "slowing down" older models of the phones to try to coerce customers into buying their newer $1,000+ phone models.

I'm so sick of Apple, their unethical business practices and their overpriced junk. This crappy credit card is no surprise whatsoever.

originally posted by: Middleoftheroad
OSX, Windows, or Linux for personal use - I choose OSX

I'm not hating on their software or hardware (most), they're some of the most secure devices, and the computers outlive PC's by quite a bit....

But the company is king of making stuff that doesn't come with everything you need, or isn't practical in some cases. They "cut cords" and use propietary inputs/outputs often requiring converters or dongles. 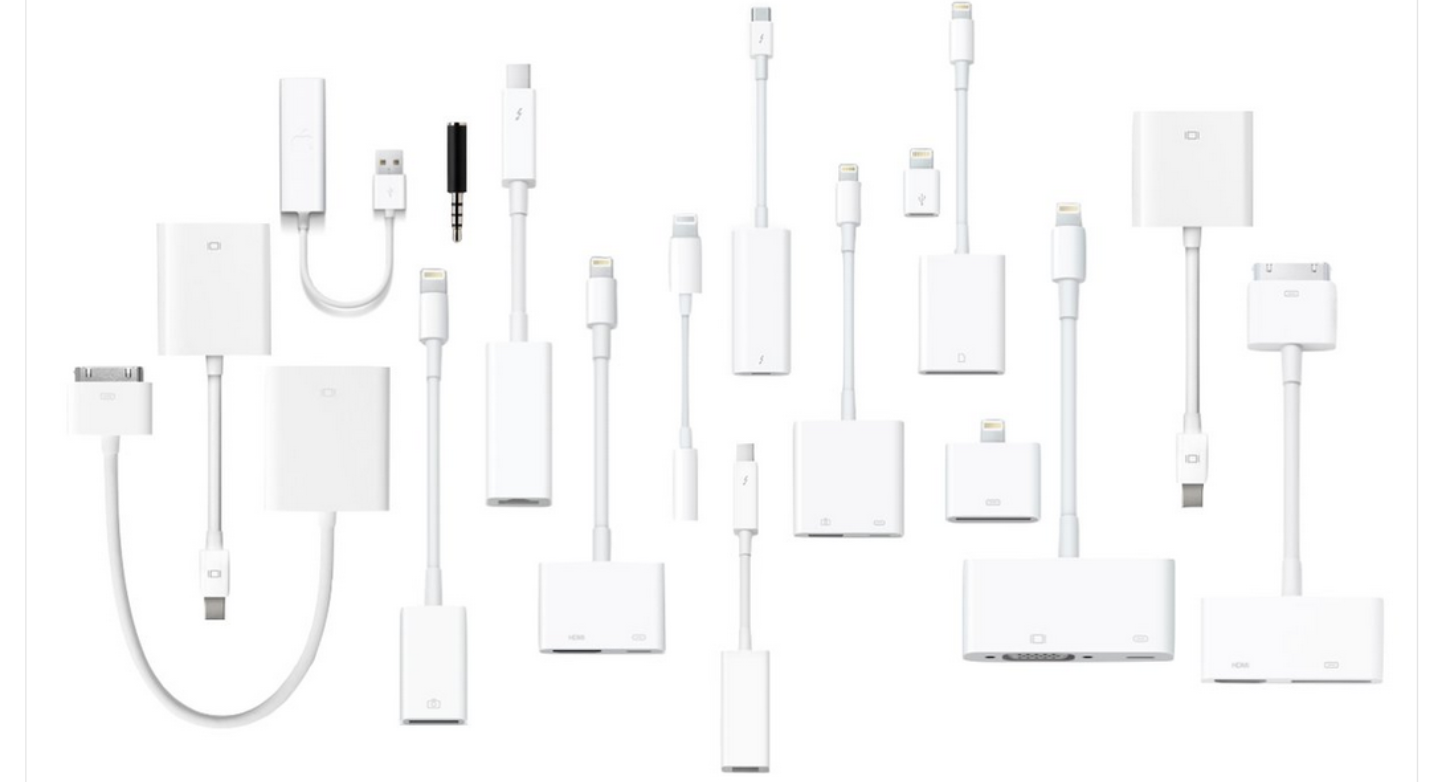 And lets not forget about the monitor you can buy that doesn't come with a stand... The stand is an extra 1,000.

As I said, some of their products are incredible, but sometimes they seem a bit out of touch with consumers.

Oh, I'm well aware of the differences. I use Apple strictly because of the software.

Plus, I blend in with the liberals a little more.

Lol, had to look up the definition of that word. I work in the city, so yea better safe than sorry. I have a good job and don’t intend on losing it because I vote differently.

I vote differently than everyone... So just rocking Apple isn't enough to keep me safe.

That's why I have an emergency tube of lipstick in my desk at all times. Should SHTF, I can just apply it and say "So you're firing me because I'm gender fluid"?!?!?!?!