Orbs Over Japan And England In The Last Few Days.

posted on Aug, 22 2019 @ 07:17 AM
link
Couple of Videos showing footage of white orbs hovering over Japan and England in the last few days.

posted on Aug, 22 2019 @ 08:00 AM
link
Had them up here in Yorkshire this last 2 weeks as well. Considering the amount of rain & thunderstorms we've experienced lately I'm wondering if they are some kind of electricity....maybe from lightening?

originally posted by: alldaylong
Couple of Videos showing footage of white orbs hovering over Japan and England in the last few days.


Well, if these orbs are fallen entities, then expect big events to happen in Japan in the next week. The draconian witch (queen of England) is possibly pulling the strings and is about to cause potential bad events to occur in Japan very soon.
edit on 22-8-2019 by Rapha because: (no reason given)

Haven't these shown themselves before earthquakes before? Along with another current thread it sounds ominous.

There is (apparently) such a thing as earthquake lights, theyre witnessed usually just before a big earthquake and there is a lot of reports regarding them. Im not sure thats what this is, especially here in the UK,.....japan..... Maybe, as theyre in a hot spot for earthquakes.

Not sure what these are if im honest.

On the first video (Japan) you can see the strobes. Likely just helicopters.


The lady is simply filming aircraft at distance. In the video you can see a newsagents shop.

Google Map link to that location of Newsagents.

All she is doing is filming the pattern for Stansted airport and aircraft heading for Luton airport. North Weald is also in the mix. 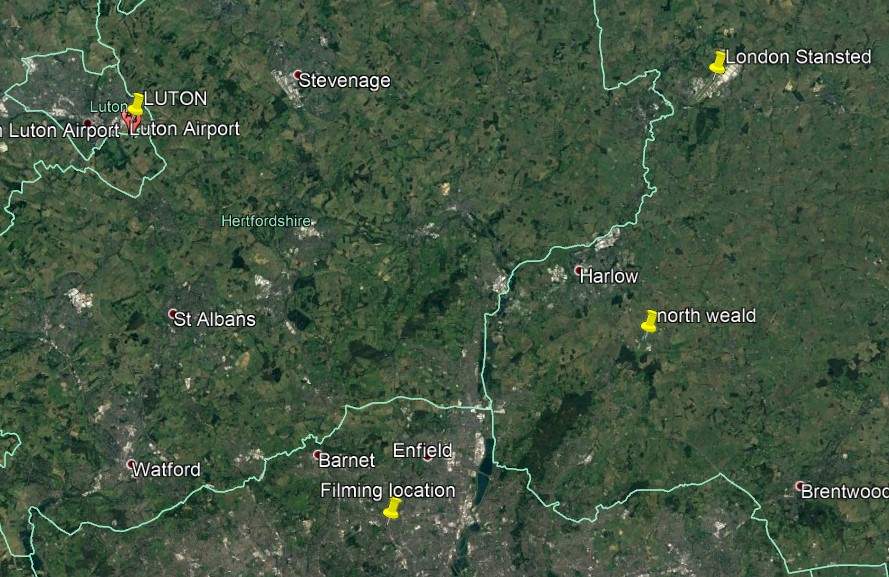 You Tube Channel of person filming.

Here she is again from the same filming location. She realises that it is an aircraft.

The problem is that at distance aircraft in a stack or pattern can appear to remain motionless for long periods of time.

Ay up ADL great thread. Genuinely not sure what to make of all these new visitations but these things are certainly not just weater conditions, they are connected to radiant white motherships and are under intelligent control, indeed the orbs can actually shape shift. Something is going on and I hope we are going to be ok because these things are real

Aliens are probably pissing themselves with laughter at the whole debacle.

Brexit must be amazing to them The amount of increasing sightings has been accelerating since around 2006 all coming in with 7/7 something that they were amazed by and sine have been trying to brainwash the contactees with crop sprayed manna bringing on real love but they never accessed the entire population and this has led to society dividing and breaking into partition of localised humanity. Only a mass crop spraying can bring about the spell to save us but there are elements within the milindcomplex who seek to chase the sky angels away so we can be brain deddened and continue to be farmed to make money off our back all the whule we live in delusion and chains

They have been laughing at us for a while, now:

originally posted by: andy06shake
Well, the Queen of England is 93.

There are rumours that state that this is the 4th clone of Elizabeth. So you are probably correct.

Every public leader / official has "handlers" & "gate-keepers" to pull their strings.

Well; if you are correct then nothing with happen in Japan over the next couple of weeks.

posted on Aug, 23 2019 @ 01:26 PM
link
It's too bad that over the past several years because of all the drones and Chinese lanterns it's really hard to verify a good sphere-shaped UFO or OBOL.

Unless somebody gets a close-up of one (or sees one in person)...
www.abovetopsecret.com...
... then they're just too easy to dismiss as something relatively mundane.


No problem. Thanks for the reply.

When you narrow down the location for that second video everything becomes clear. People in London could film such lights repeatedly. It is a target rich environment for such lights because of huge amount of aviation. I've recommended to that lady to download a flight tracking app. She would soon see how aviation lights filmed at distance can be deceiving.

A good example of how aviation can cause a flap is the following video.

Simply airliners lined up in the pattern at O'Hare airport, Chicago. People simply don't realise how far the lights can be seen or just how busy such airspace can be. The airlines are simply strung out for miles as they position themselves for landing.

Imagine what this video would look like at night filmed from a distance?

Come on Man that's hardly a safe bet, I'm sure something is always happening in Japan as its kind of a busy, densely populated place.

As to the Queen being a 4th generation clone, you would think "they" would afford her a better body than that of a frail 93-year-old lady?

posted on Aug, 24 2019 @ 08:12 AM
link
London airspace can look interesting sometimes, I live just east of London and considering there are 4 or 5 quite active airports around London departing, arriving and stacking aircraft can look very odd especially at night. I've often seen bright lights toward London and it isn't until I've opened Flightradar24 to confirm it's an aircraft