Nader was arrested just before Epstein , in June , CP and trafficking at JFK airport . Nader plus Epstein equals double trouble - a ring around Clinton

He's another politically active international businessman who is certainly a pedo who has even more clear links to both Trump and Clinton than Epstein does . A middle East go between , he sought to broker ties between UAE and the Trump WH . Hence Mueller called him as a witness .

However he was heavily involved with Clinton too over the years . That said he was cleared to enter the Trump WH too , despite having been caught and charged with something horrible every decade since the 80s .

Click on the yt video and look in the content creators description and there's a link to a study linking both the recent arrests with pizza parlours .

These pics remind of the film Goodfellas . And's that is a very very bad mf Clinton is with . On the island ?

In with Trump ? Or more so with Clinton ? Why both ?

Arrested is he ? As well ? ..... Correct . Can't complain about that . Given his history he will get a heavy sentence .

Let's have another question - is Nader still alive ?

A "study" linking the arrests to pizza parlors?

This post has hoax bin written all over it. 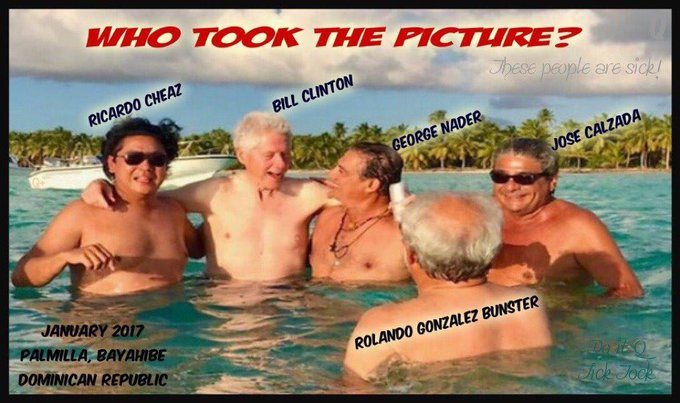 Do ya think the masses are desensitized enough yet?
Do you believe all these recent pedophile stories would be getting any
coverage at all? If they were against the wishes of those that control
the headlines? The media wants us to believe the media is exposing
people who have had the media behind them for decades. And it
will never not be behind them

originally posted by: grey580
a reply to: FieldMarshalMatt


2010 Haiti earthquake On January 12, 2010 a devastating earthquake struck Port-au-Prince and the its surrounding area and resulted in mass devastation.[6] The Haitian art world suffered great losses in the earthquake. Museums and art galleries were extensively damaged, among them Port-au-Prince's main art museum, Centre d'Art, where many art works were destroyed. The collection at Collège Saint Pierre also was devastated, as was the collection of priceless murals in the Holy Trinity Cathedral.[7] Some private art galleries were also severely damaged, including the Monnin Gallery in Pétion-Ville,[7] and the Nader Art Gallery and Musée Nader in Port-au-Prince. The personal collection of Georges Nader Sr., the Nader collection was worth an estimated US$30-US$100 million. Shortly after the earthquake struck, UNESCO assigned special envoy Bernard Hadjadj to evaluate damage to artwork.[8] The Smithsonian Institution, led by Under Secretary Richard Kurin, and with the assistance of the U.S. Embassy in Port-au-Prince and the Government of Haiti among others, embarked on a multiyear project and survey to help restore key Haitian cultural treasures and train local Haitians on art preservation and recovery techniques. [9] References

Is he called Georges Nader or just George ?

There's some voodoo # going on with the name George Nader imo

Oh and here's a ATS post debunking the photo from back in June.

posted on Aug, 22 2019 @ 07:40 AM
link
It's all well and fine. Snopes be dammed. Personally I believe the photo is incriminating circumstantially. So what.
And you guys know this is the cropped version missing the guy standing left of the group, right?

The REAL QUESTION is WHO TOOK THIS PICTURE?
Aaand the crazies on the chans spout everything from Chief Justice John Roberts to Ghislaine Maxwell, Elton John, wild speculation abounds.
Supplementary, the issue is WHY? What needed to be recorded for posterity about this event? More blackmail honey trap perhaps? Hmmmm

How is it incriminating?

Neither the right Nader or Podesta are in the photo. It's just Bill in the DR taking a swim with some random people.'

The story was shown to be a hoax months ago when it was first presented here.
Not the same guy.
You are correct.

Granted. Debunked for Nader/Epstein Island.
Potentially incriminating? Depends on who/what/when/why.
Somebody took that picture in the DR for a reason.
Or is it the dreaded deep fake?

originally posted by: grey580
a reply to: ganjoa


Showing my age. I forgot about the selfie generation(s). My bad.
I spent far too many years avoiding cameras by being constantly behind the lens.
But there's another rabbit hole - where DID that photo come from?

Ok it's apparently fake news , thanks for letting us down gently . There's a question mark in the title on purpose .

During search of yt came across a book reviewer with book from the 80s by George Nader . It's homoerotic fiction and the reviewer thought it belonged near or on the banned list .

There's something in that name .

As regards 'the other' George Nader , apparently the actual one in the photo , there's things fishy about him , in 2 spots ,
1. clintons links to Haiti . the Clinton Global Initiative helped bail him out post earthquake when his 50 - 100m worth of art was 'lost' .

2. post Haiti earthquake the oxfam charity boss there was found to have been hiring underaged girls to his mansion . redcross also involved . a later report said some of these girls were trafficked to britain , and then back again at the time the furore was raised . The last part was unknown at the time and so not reported , but reported by the independent at a later date

maybe he has his own conspiracies.

Why on earth didn't you look through the comments on that video? It would have saved you a lot of hassle. The George Nader in the pic isn't the convincted sex offender George Nader.

This is the guy in the picture.