posted on Aug, 19 2019 @ 04:33 PM
link
UFO video I thought was interesting. Supposedly out of Miami, Florida. Shows a UFO with what appears to be a smaller UFO rapidly orbiting around it. Pretty annoying music FYI.
www.mufoncms.com...
www.ufostalker.com...

Here is my poor attempt at stabilization, but you can kind of get the gist of it. The little thing is orbiting really fast!

posted on Aug, 20 2019 @ 10:42 AM
link
That looks like something falling with a parachute that hasn't deployed yet

originally posted by: lordcomac
That looks like something falling with a parachute that hasn't deployed yet


Sort of. Except this little clip is taken from the first of four videos that show basically the same thing for 5-6 minutes. Probably longer than your average free fall. Also, it doesn't get closer to the ground. I know what you mean, though.


about a month or so ago there was a thread about this video here on ATS.

I am sure others will remember and be able to link to it.

originally posted by: InhaleExhale
a reply to: Blue Shift


about a month or so ago there was a thread about this video here on ATS.
I am sure others will remember and be able to link to it.


I suppose it could have been an old video uploaded to MUFON recently, although the person who submitted it said it happened on August 13, 2019. Or maybe it was something similar.

Or it's a time lapse of a weather balloon with its radiosonde swinging around beneath it.
Here's what happens when they get higher.

Or it's a time lapse of a weather balloon with its radiosonde swinging around beneath it.


It might have been, except this apparently wasn't time lapse footage. The guy got a couple more clips of it, but like a lot of people he messed up the focus so it looked like a big blob.

Yeah, I've seen that kind of balloon / payload spinning in person with my own eyes. But I noticed when that happens it forces both the balloon and the orbiting thing to wobble elliptically around a shifted center of rotation. This one doesn't do that, which is one of the things that caught my attention. The center thing (balloon) stays solid as the other thing whips around it really fast. Unless I'm way off with my timing measurement (which I could be), the orbit is around three times a second. That's pretty fast in real time.

When I read the OP I thought these came back

Not a mothership, then?

It's difficult to tell really It's certainly something and the weathre balloon theory is a good one but it looks to real for that. Can't fault it really 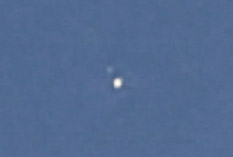 My cousin saw something like that where he lives, but the main object he saw had several smaller objects swirling all around.