I’ve been watching this for a while the groups on the right have been trying to avoid physical conflict . But the left keeps trying to instigate it .

The leader of patriot prayer Joey Gibson was arrested yesterday. He thinks it was a move to cut down the numbers on the right and it was somewhat successful .

The leaders on the right keep asking their contingent to step back . ANTIFA on the other hand keeps moving forward. At some point it’s going to break but hopefully the instigators will be shown for what they are .

Tiny already has a broken nose but it may have been been blue on blue action .

Warning cussing and there’s one crazy chick from ANTIFA running around with no top on .

It’s Saturday in summertime in Portland. Go have some fun. Oh wait, this is fun for them cuz they’re all attention whores...

It’s a shame what my home town has turned in to.

posted on Aug, 17 2019 @ 10:38 AM
link
Remember when Cheers, Seinfeld, and Friends were the must see T.V.?
I never really thought I would be getting old and remembering simpler times, but here I am.

Must see tv is now blood thirsty Americans fighting in the streets, and the side that is suppose to be for peace and equality are the violent instigators. Thank god they aren’t as good at fighting as they are starting it.

Parts of the US are going devolve into scenes like Gangs of New York soon.

First of all I hate your AV . Lol

there’s one crazy chick from ANTIFA running around with no top on .

Is she a hot crazy chick ?
'cause that's the only way I'm gonna watch a bunch of a**holes runnin around screaming at each other.

They certainly are good at running their mouths into a bullhorn.

I didn’t post this for the fights or screaming. I posted this to see if City of Portland because of national outcry will finally end it’s leftist bias .

posted on Aug, 17 2019 @ 10:50 AM
link
The Oregon Justice Resource Center (in support of ANTIFA) have filed a temporary injunction to stop the rally. Seems like they want to suppress the 1st amendment for anyone that disagrees with their own perspective. 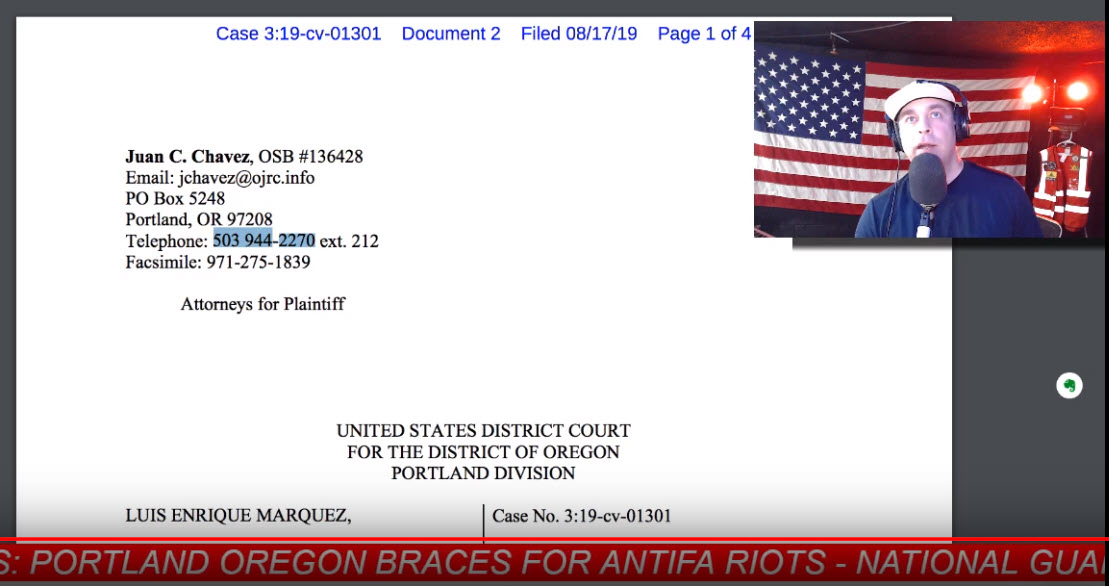 Sorry...just an attempt at humor.

If you're waiting on the Left to call out their own, you're in for a long wait.
As we've seen in the past, they will deflect, defend and excuse violence against anyone not on their side.

Cool ATS would love to have boots on the ground .

I’m trying to verify but it looks like ANTIFA has a Federal protection order now in place .

If so the “anti-fascist” apparently went to the fascist for protection .

originally posted by: DBCowboy
I’ll be downtown Portland in about 3 hours.

Stay safe brother. Keep your back to a wall.

posted on Aug, 17 2019 @ 11:01 AM
link
For a bunch of anti-fascists they sure behave like fascists. The moment the left hears an opposition group is meeting up they come in to crash the meeting and bust some heads (which they can only do in large numbers because individually they are cowards). Not at all reminiscent of the brown shirts...
edit on 17-8-2019 by ManWhoWasThursday because: (no reason given)

We need more hate in this country. Antifa should let the Nazis march. Satan laughing spreads his wings.

I hope that no one from either side gets seriously injured. I'm sure, this protest will be carefully watched by both sides. The side that starts the # to hit the fan will be chastised by the media and probably by many of our politicians.

President Trump is also watching. I hope the Proud Boys, American Guard, Three Percenters and the Daily Stormers play nice and aren't the ones that start the # to hit the fan. If Antifa starts the violence, Trump is ready to designate them "a terrorist organization." What if it's shown that a right-wing group starts the violence?

“Major consideration is being given to naming ANTIFA an ‘ORGANIZATION OF TERROR,’” the president tweeted. “Portland is being watched very closely. Hopefully the Mayor will be able to properly do his job!”


originally posted by: DBCowboy
I’ll be downtown Portland in about 3 hours.

I'm going to find a hotel bar, do my paperwork (have meetings all day tomorrow and Monday) and report from my safe space.