(yeah, had issues with the other thread because I'm not very nice so trying this out in the pit.)

She embraces the ideology of the left. I mean in lock-step.


Biden is on his way out. He's long passed his prime. He can't do the job. It's even sad to pick on him now, but I still will.

Harris is a one-trick pony. She's a woman, and she's dark skinned, but that's all she has.

Buttigig (sp?) is the memory foam candidate. He makes a temporary impression then just fades away.

Tulsi? Obviously the cutest member of the crazy-train but will not go anywhere because even cute fades in the shadow of authoritarianism.

Beeboo? He's become the sad guest at your kegger you want gone but feel pity for. He thinks he's a great dancer but when on the floor, it's just embarrassing.

The others are as forgettable as tofu rice cakes at a boring neighbors house-warming party.

So I have to go with Warren. 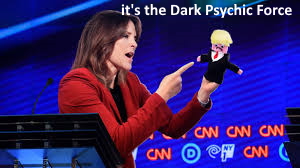 
Thats why I love him


There comes a point when you get so far left that you can't justify it Constitutionally.

Yang Gang is forking out stacks of Benjamins!

originally posted by: carewemust
Since Barack Obama is trying to change Joe's mind, I say Michelle Obama will be the nominee.

Will she run as a female, male, or tranny?

posted on Aug, 16 2019 @ 08:32 PM
link
I'm almost at the point of believing this entire charade is one big psyop in favor of Mr.Trump, because the democratic leadership is so pathetic in comparison that I'm almost forced to believe that they were deliberately put in place -- either willfully or otherwise, and by whom or how, I'm not really sure...

But if Trump doesn't win by a landslide, either I'm the biggest fool ever or there is something terribly wrong with America.

Well, a certain type of dream.

Socialista Communism is a loser, presented by control freak losers, for greedy lazy populations of losers.

But Hey!
To each his own!

originally posted by: xuenchen
The perfect authoritarian -- her way or you're jailed !!!!

If the glove doesn’t fit you must acquit

The Biden bid is just for show: Biden will win the nomination, then shortly after the convention will have to withdraw for health/scandal/dementia reason and Hillary the Bitch will ride in to "save the day", as the old hag has neither the desire nor the health to honestly campaign for the primary.

She believes she is OWED the Presidency, remember ?

She will NEVER let this go

Oh, you're a Booker fan, I see.
That's cool too, to each their own!