posted on Aug, 16 2019 @ 10:35 AM
link
I live in upstate NY, tornados are extremely rare. We had a storm blow through last night, and had a tornado warning, telling us to take cover. I searched a couple of maps, and it looked to be a few minutes out, but the center of the track was heading right for us.

A few minutes later, they dropped the warning. I went outside, and could see the storm approaching. Looking to the north, it was right there. Only about 300 yards away just over the tree tops. It looked huge, but probably was not that big. Maybe a hundred yards across. I tried to get it on video, but it did not turn out well, it was so close that it was to wide for the camera, and partly hidden behind our tree.

I am not sure if it actually touched down, it may have as some areas had trees and power lines down, a few roofs damaged, and a she overturned. Probably only an EF0 or 1, but still impressive.

Even though it was so close, we only got winds of maybe 40MPH, no damage.

They showed 3 pictures of it on the news this morning, but can't locate them on the news web page or anywhere else for that matter.

Cool, but scarry. 45 years old, and the first time I have seen one.

posted on Aug, 16 2019 @ 11:02 AM
link
Im from the midwest so have seen dozens. Awe inspiring things. In the midwest...a tornado siren means grab a beer and run outside.

Haha, so true. Last time I saw one was while at work. My mom called me and said a tornado was close to my work, then the sirens went off right after and all of us went outside to observe.
edit on 16-8-2019 by Middleoftheroad because: (no reason given)

Damn, that's really close. The couple I've seen were always a mile or two away, glad you made it out alright. Did the weather get really calm right before it all? I've heard it does if you are that close, but could just be something I've heard from movies.

posted on Aug, 16 2019 @ 11:43 AM
link
Not that time cuz i was in a car and so close...but the the thing that is constant is that pea green evil looking sky....and the noise...that freight train noise is unmistakable and will have atheists praying to god.

That power is addicting...could be why peeps run outside to see one.

Yikes, keep it away from Rhode Island!

That would scare the hell out of me!

"Awe inspiring" is my exact thought. Especially the biggies.

Truly incredible forces of nature. Micro-bursts scare me more though, they rarely have even the limited amount of warning a tornado does. Luckily, they tend to be not as serious.. But Ive been in two that went from just a good storm to real, real sketchy in literally 2 seconds.


I was stationed at Whiteman AFB in Missouri and we had such a bad storm one night that I jumped in the car at 3 am to head to work on the base for some shelter at a friends place in the dorm. I lived in a trailer at the time and be damned if I was gonna be a statistic. I didn't even need the headlights the whole way, the lightning was so constant. I was pretty freaked out that night.

I lived near the greatest named town in the US...Tightwad, Missouri. They even had a Bank of Tightwad....mmmhmmm...sure did.

One of these days, I want to get out to the mid west and see a good one. From a distance of course, and out in a field where it is not going to cause damage, injury or death. That would ruin the whole thing.


Same, its hard to imagine something one-mile-wide. I have seen the afters though and you feel about this big .

posted on Aug, 16 2019 @ 01:18 PM
link
I'll be honest, I'll take Alaska and the periodic earthquakes over tornados every day of the week. The footage they show of the huge swaths of neighborhoods and field with everything ripped apart and seeing something powerful enough to drive 2x4s through the trunks of trees is as close to a tornado as I'm willing to get.

originally posted by: lakenheath24
Same, its hard to imagine something one-mile-wide.

I see you've not met my mother in law...

Living in tornado ally we use to chase them lots of open county. I dont know what we would of done if we ever caught one.

posted on Aug, 16 2019 @ 02:19 PM
link
You want really scary? Try living in Oklahoma. I've heard that their tornado plan is to wait long enough to see what direction it's rolling in on you from, jump in your car, and drive real fast the other way because the ground out there doesn't support basements real well. So you either pay to have a specialized storm shelter put in, hunker in your bathtub and kiss your butt good-bye or drive like mad.

The problem is when they hit up towns of size like OKC or Tulsa or Moore and *everyone* in town has the "drive like mad plan" so you get caught in gridlock.

I've only lived in Kansas and Missouri for all my life so I've had basements, thankfully.

posted on Aug, 16 2019 @ 02:44 PM
link
I live in Rochester, NY and saw some ugly looking radar images from around your area yesterday. I found a few photos of that funnel cloud you may have seen around the Elmira area: 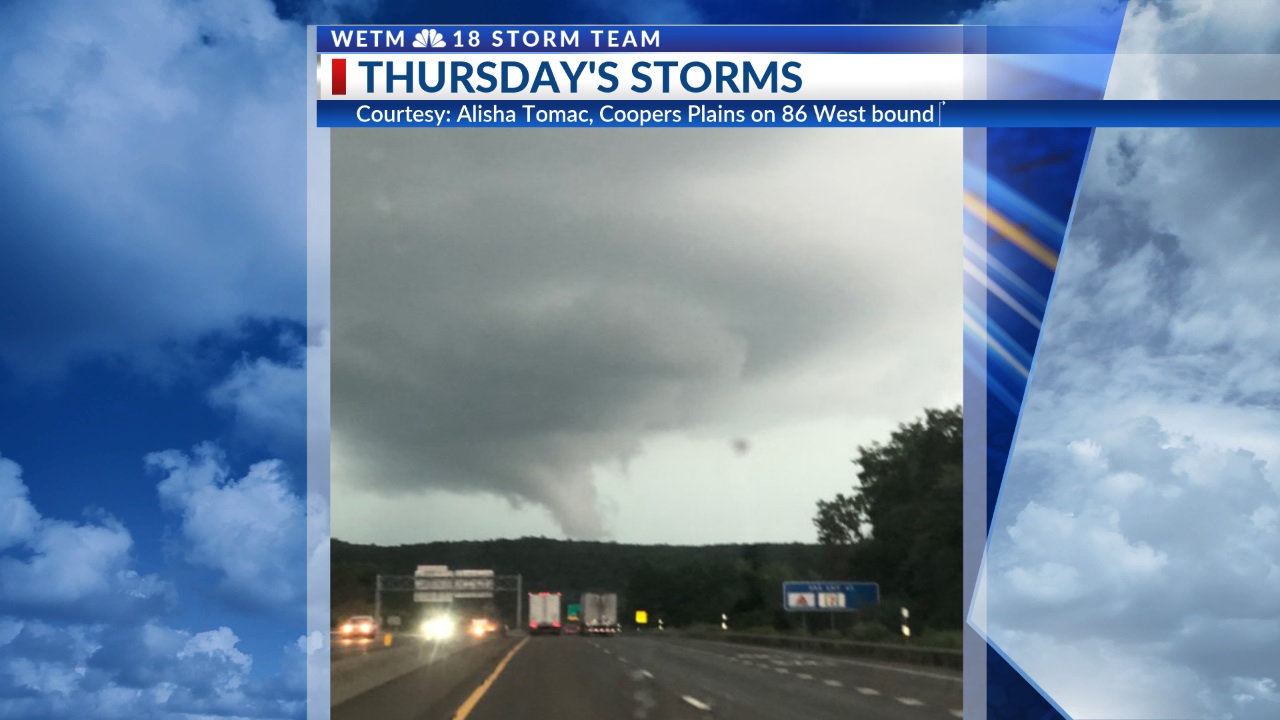 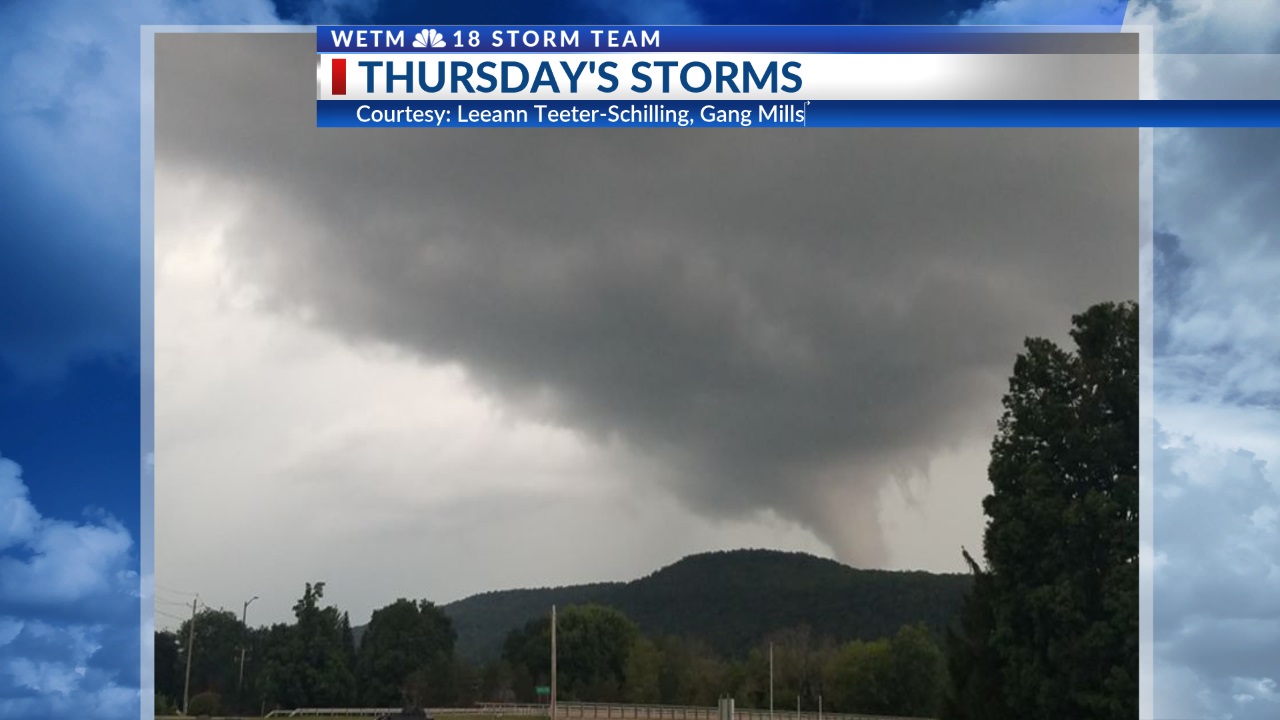 originally posted by: shawmanfromny
I live in Rochester, NY and saw some ugly looking radar images from around your area yesterday. I found a few photos of that funnel cloud you may have seen around the Elmira area:

Yes, I live between Corning and Big Flatts. I am not 100% positive, but I believe the second picture was taken just after it passed by. We live up on a hill, and from the looks of that hill, we would be toward the left hand side of the hill, further up on top. If I am correct, the picture would have been taken probably less than 5 minutes after it passed by us!

Edit: The picture says it was taken in Gang Mills, which is to the west. So I am incorrect on that being our hill. Our hill would be a couple more miles to the right out of picture. So this was probably taken about 5-10 minutes before it passed my house.
edit on 16-8-2019 by MrRCflying because: (no reason given)

I was stationed at Whiteman AFB in Missouri and we had such a bad storm one night that I jumped in the car at 3 am to head to work on the base for some shelter at a friends place in the dorm.

Having lived in Missouri my entire life, I've seen more than my share of tornado damage, but being a girl, I was too scared to join my father or anyone on the front porch when the tornado sirens went off!

I know exactly what some of you mean about the conditions before one pops up. Lots of rain, followed by hail, and then a complete calm and green haze throughout the entire sky and atmosphere before the sirens start going off.

Having lived in a neighboring town of Whiteman AFB, I got used to the sounds of B-2 Stealth Bombers in the skies too. Occasionally, I'd have to peak out a window to make sure I wasn't hearing thunder and a storm rolling in. Ha! I'll tell you what though, none of the storms I've witnessed were as loud and scary as the time Whiteman sent 6 B-2 Stealth's to Libya at the same time. My whole house shook and I thought the whole roof of my house was going to come down. Reflexes even made me duck while I was inside the house!