Epstein guards fell asleep, did not check him for hours: report

originally posted by: Itisnowagain
a reply to: Grambler

I wonder how much they were paid?

I wonder if the guards were drugged or gassed? That would explain a lot.

posted on Aug, 14 2019 @ 08:44 AM
link
Bet it comes out that the guards say they only erased the camera footage just to cover up the fact they fell asleep.

posted on Aug, 14 2019 @ 09:04 AM
link
The guards will claim they were so worried about losing their jobs for accidently falling asleep...that they doctored their logs and erased the camera video to cover it up.

Let me explain how this is Trump's fault.

The guards slept because of the heat wave.

The heat wave was caused by global warming.

So Trump killed Epstein to hide the truth of global warming because guards slept.

Yes, Orange man should have been guarding Epstein himself!


A person familiar with operations at the federal jail where Jeffrey Epstein killed himself says one of the two people guarding him the night he died wasn’t a correctional officer.

Federal prisons facing shortages of fully trained guards have resorted to having other types of support staff fill in for correctional officers, including clerical workers and teachers.

The warden, who was in charge at the time of Epstein's death and then "reassigned," sued Eric Holder for racism in 2013. 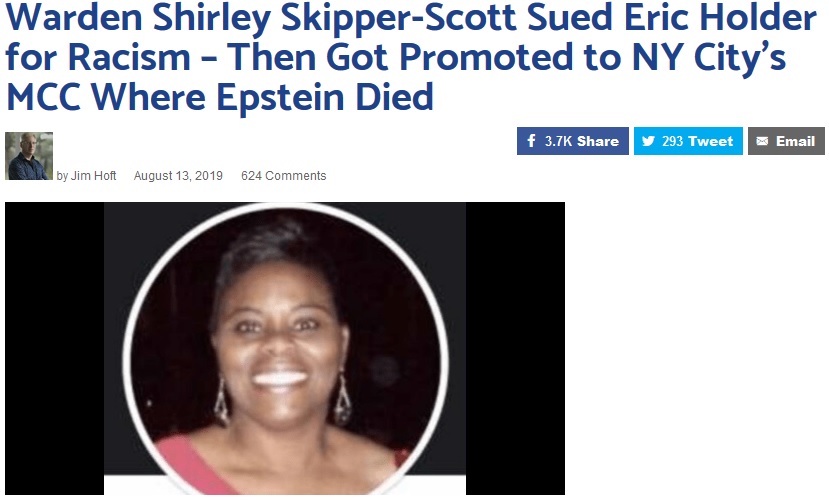 In 2013, Skipper-Scott filed a civil rights complaint against former Attorney General Eric Holder in Mississippi Southern District Court alleging employment discrimination. Skipper-Scott initially sued both the Justice Department and Holder but later amended her complaint to list Holder as the only defendant.

Though she was listed as the warden in several news reports, she only briefly served as the jail’s acting warden and was the associate warden at the time of Epstein’s death.

“The warden of the MCC facility, Shirley Skipper-Scott, has not commented on Epstein’s death,” ABC News reported on Sunday.

That's exactly what I am thinking. Something was introduced into the air.

posted on Aug, 14 2019 @ 12:04 PM
link
This just in: Epstein guards found to have recent large deposits in their checking accounts made by The Clinton Foundation.

originally posted by: IAMTAT
The guards will claim they were so worried about losing their jobs for accidently falling asleep...that they doctored their logs and erased the camera video to cover it up.


Regarding erasing the camera footage, at the properties my company manages, we can review all the stored footage but we have no ability to delete it or pull it off the system via USB. This happened because a former Chief Engineer entered our main office, stole a bunch of stuff then tried having our camera guy teach him how to delete everything. After that, no one has the ability to delete or remove footage except the camera guy himself, which is equally a pain in the ass as much as it is secure.

I would imagine any high-profile/security area carries business the same way to prevent exact situations like that.
edit on 14-8-2019 by Drucifer because: Derp spelling

Get a job as a property engineer. I've had to sh!tcan 2 of them in the last year for sleeping in the office of one of our 3rd party properties.

Bill Barr did say heads will roll, didn't he?

Time to move on. All this happened under his watch, his justice dept, his prisoner, his bureau of prisons. If Barr says it's over, then it's over.

Already in "Stage 2" of the setup to design the automatically accepted "Official Story", you know, for History's sake and all that 😎🚬

Next we'll hear about the pristine bedsheets 😎🚬

Right, where’s the CCTV footage of these asshats sleeping on the job??

They need to show SOME proof to these ridiculous claims. I don’t buy that they were both sleeping.

A perfect storm of incompetence, with no proof of coarse.