Everyone will be calling him Fredo now!

I bet he put ice in his drinks.

I'm not a supporter of his or agree with almost anything he stands for but I don't see a problem with his reaction. I'm not talking about his comparison with being called Fredo and N word being on the same level, I think that's just insane, but that said, I really don't see what's wrong with his reaction. I mean they were clearly there to get a reaction, they had their phones at the ready. This is the sort of thing we attack the left for doing to Republican people all the time and again personally I don't disagree with his reaction, the cussing, the threats of violence etc. I like to think I would do the same. It's rare to see it but that's besides the point, I think from what I've read about Chris, he does know how to "handle" himself in a fight (apparently lol) so that's why he was standing strong and ready for fisticuffs.

Honestly I do not think he over reacted and anyone who has called out Republicans for never throwing a punch when they are confronted like this or those who called out the left for doing this very thing shouldn't have a problem with Chris' reaction.

Also, I've still yet to watch the Godfather. Is it really that good?

I'd pay good money for that.

Anyone who threatens violence over someone calling them a word is an idiot/psychopath.

Adults know that words aren't a big deal, and they don't just go straight into making death threats when someone calls them a name from a movie or something dumb like this.

Fredo needs to lose his job and face the consequences of this psychotic violent threat. He should be charged with a crime too, because this is assault.

If I can't go around threatening to throw people down the stairs - than he can't either. Does the law apply to just me or does it apply to everyone equally? Let's see. I'm betting he's ABOVE THE LAW like most other "important" people.

posted on Aug, 13 2019 @ 05:41 AM
link
Probably the funniest thing about this is that Chris "Fredo" Cuomo has regularly accused Trump of being thin skinned.
Reading fredo's twitter feed is quiet funny all of a sudden.

From the video description...

and i know he's been called it live on air and said nothing.

People like this should not be on TV imo. He should be sacked for abusive language and violent threats.

If CNN backs him on this it just shows what a sorry excuse for a media outlet they are.

originally posted by: UKTruth
By the way, did anyone else hear Fredo say at the start of the video "I am Chris Cuomo, an actor on CNN". Truth slipped out in a moment of anger.

Nah, it sounds like that, but it was this

"I am Chris Cuomo, an anchor on CNN"

How long before this becomes the accepted Wiki page...!!? 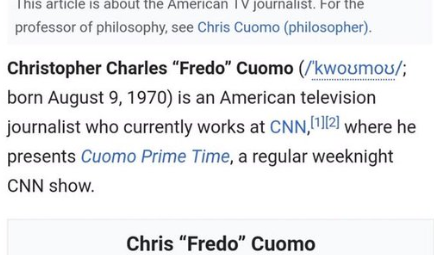 He really thought his name was Fredo because he watched Rush say it all the time? I hope that man gets interviewed..


Rush Limbaugh coined the name "Fredo" Cuomo...been calling him that for years.

originally posted by: RazorV66
Wow Cuomo is such a paragon of Liberal virtue eh?

posted on Aug, 13 2019 @ 07:02 AM
link
..oh look... the video has been taken down on Youtube... other sites to follow no doubt.
Ideological control and protection of their own. The bias is out of control.

..another version uploaded... it will be deleted soon no doubt.

Really I would have.

That's how I got my spine broke, I was in jail and the biggest guy there (350lbs) and I got in an argument and I told him I had the right to disagree and he threatened to kill me so I got in his face and said exactly that. I'm barely 145lbs and wasn't ready for what came next, but you know what? I ain't a coward.

I may have got a serious whoopin but every single person in that jail gave me mad respect and treated me like I somehow won that fight (which I totally didn't).

So the way this guy let Fredo threaten him is unacceptable. I wouldn't let anyone talk to me that way. I don't give a # what consequences I'll face. You'll treat me with respect and speak to me like a grown man or you just need to start punching me right now.