I'd be asking one very important Question.

Who had the most to lose by getting rid of this scumbag?

Some thing Trump had something to do with it, others say Clinton did.

That deep cut on Epstein's ear makes me think he was choked to death by someone with a metal rope. Epstein was twisting his head back and forth, which caused that deep ear cut. (Just speculation)

I pictured a similar situation that occurred in the Godfather movie. This gangster was in the back seat of the car. When Carlo got in the front seat, a metal wire/rope was used to choke him to death. Lots of struggling for about 10 seconds. 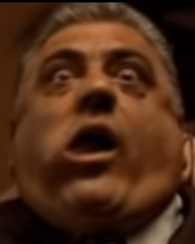 First time seeing this photo, the ear does look funny but the skin colour is wrong too should be almost black looking...
I’m not 100 percent but I believe it is very common for the ligature to remain on the deceased until autopsy for one they are not easily loosened or removed and are a large part of the investigation and death is rather obvious eliminating any need of haste for removal...
Other than that I’d have to say he looks a lot like he could be a brother to George Bush...
edit on 12-8-2019 by 5StarOracle because: Word

Speaking of autopsy, when will the results be released?

According to another thread around 12 hours ago...
I have no clue as to when the results will be made public sorry...

posted on Aug, 12 2019 @ 06:24 AM
link
I am not one to usually jump on the conspiracy band waggon but even I am willing to say something about this stinks and its not just his rotten corpse.

Right now am thinking that they let him do it, they knew he was very high risk but didn't have him on suicide watch in the hope that something like this would happen.

There being not footage makes me even more suspicious, a man like that should have had eyes on him at all times.

And you know these cameras were working because the guards would walk out in protest if they didn't have cameras on all the hallways and public areas. I've worked on a couple jails and prisons and there are cameras everywhere. Just everywhere.

But here's an interesting question...

In the first attempted suicide the same question was asked (i.e. where are the cameras), and they said they weren't working. But here again, there were cameras outside the cell which were working....so where is that footage?