I've been trying to wrap my head around this too. Why? So I too will speculate:

1 He Hasn't died, and this whole front is a way of quietly moving him to protective custody. I doubt this theory since it would require him to flip on a group of people that reportedly former heads of states of multiple nations. There would be no place he could go and live a free life, so I doubt he would go this route. I could be wrong so that's why I list it here.

2 He hasn't died at the time of his reported death, and was taken by others to prevent him from talking. This also get's tossed out by me since it would mean that the same group of people listed above have a world wide secret cult, but poorly take him some place else to keep him quiet or torture him. This doesn't make much sense, but I guess it's a possibility too.

3 He is dead and it was a hit. I'm going to pass on this since it would have been easier to kill him before he got brought in, and it would create a very easy to investigate group of people. Again though it is a possibility so I guess it should stay, but it's not my first choice.

4 He's dead by his own hands. Two way's this could go:
He couldn't live with the thought of being apart from his twisted lifestyle, or
He sacrificed himself to whatever deity he worshipped.

In my thread about an alternative theory about this whole gruesome affair (AS SEEN HERE) He may have taken some pointers from Randolph Carter in Lovecraft's stories and tried to stay in an infinitely perpetual dream world. Maybe Epstein thought he had his own "Sliver Key". Until we know more about the surrounding event behind and in front of his death. We may never truly know.

Speculation can be absurd, but it can also lead to discussions and new views of existing facts in order to understand the world around us better. Having these speculative discussions about the evidence that has been released and will be released in coming days/weeks will allow us, as a whole, to understand and digest the information.

edit on 11-8-2019 by Guyfriday because: Had a wierd timing issue that forced the post. Hey at least it wasn't multiple posts.

originally posted by: Scepticaldem
This is the same guy that it isnt speculated set up the Clinton foundation.

Not a proven fact. His attorney claimed Epstein helped co-found it, but offered nothing to corroborate this. We do know he donated $25,000.

posted on Aug, 11 2019 @ 05:17 PM
link
I think it is obvious that third party "He said, She said" is what killed him,
Irregardless of a suicide or an assassination.

I seem to have a habit of doing that.

or he tried to hang himself, but that meathead ex cop woke up and saved his life, they put JE in solitary and he accused the ex cop of trying to kill him, so they removed him from suicide watch back to normal ops, He tried it again, this time succeeding. 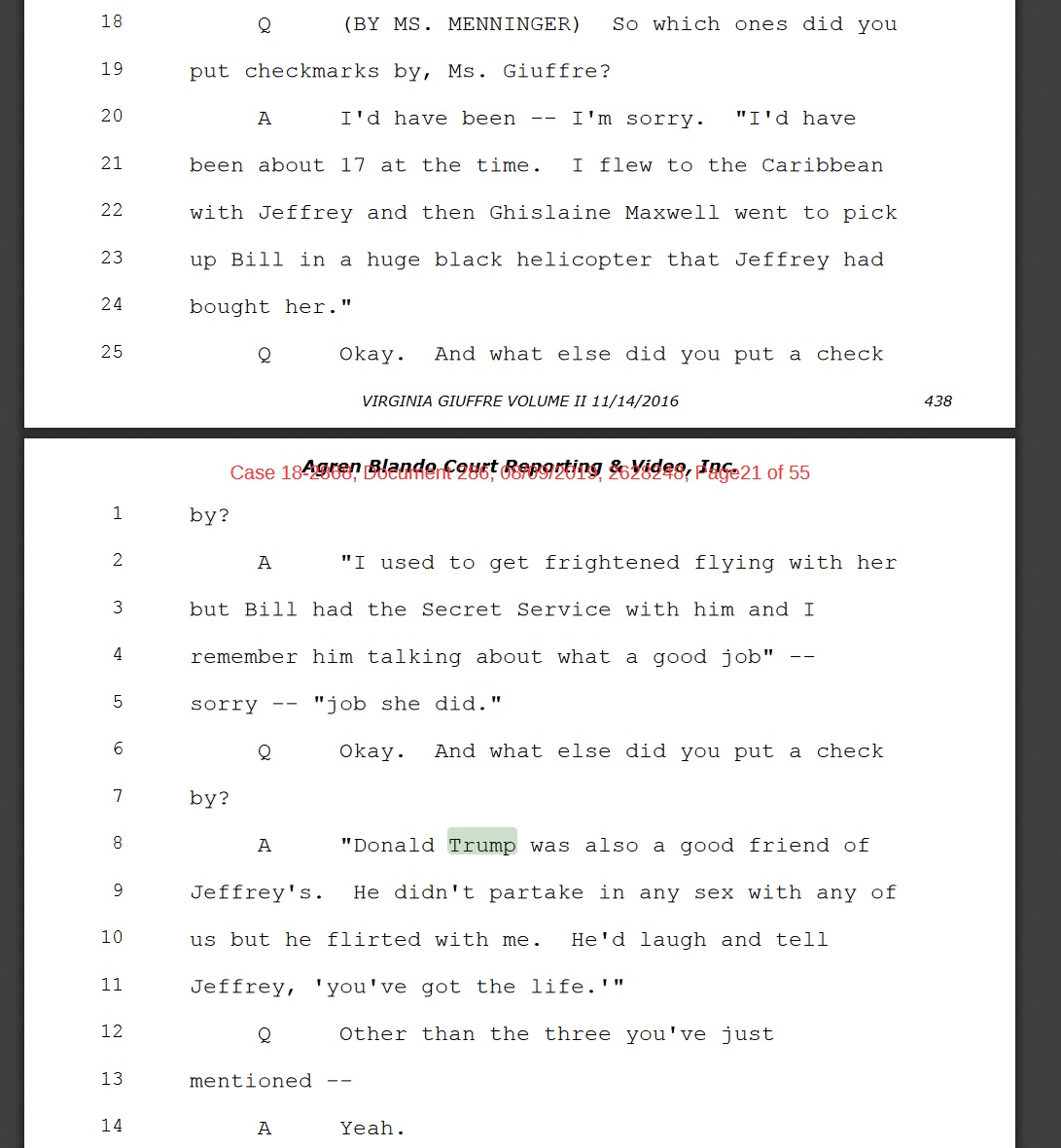 
Edit: And a correction on what she said a few pages later. He was there at the parties but she said she never said he flirted with her. 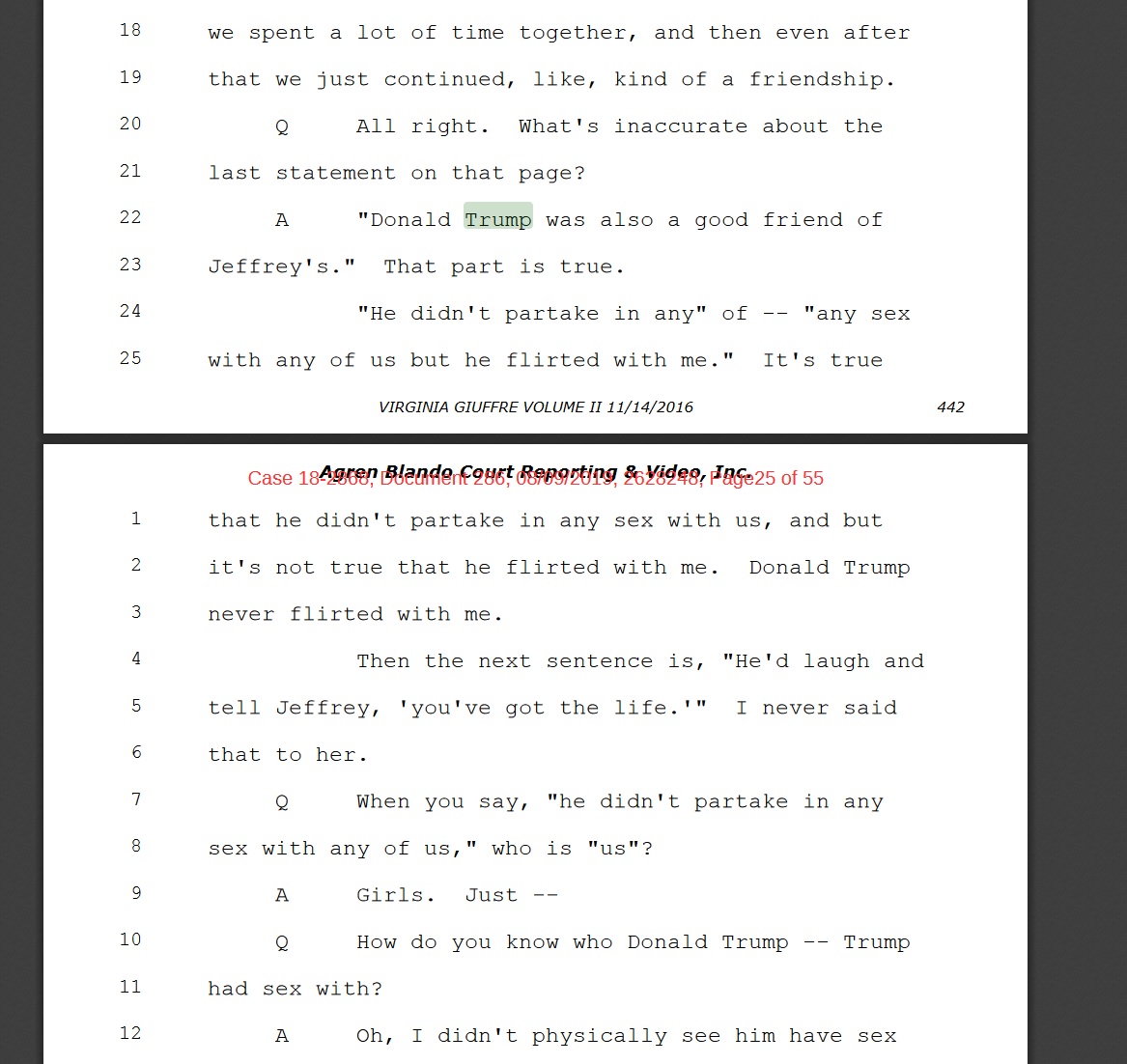 This is just getting better, I suggest you all read it instead of bickering.

posted on Aug, 11 2019 @ 05:34 PM
link
Even more important stuff missing from the evidence this time where Virginia Giuffre is being interviewed about who she was trafficked to

between page 542 and page 543 of 638 (exhibit hh ) the interview goes onto being about George Mitchell and cuts off .


One thing here is for Epstein and all these others - all the names named - certainly did like massages , where Epstein had 50 - 100 masseuses at once working at his house according to one of his regular staff . He had lot of visitors , exactly the people we've been talking about too

There's a lot in there , princes prime ministers , nobel prize winners all sorts . But we've now found THREE GAPING HOLES at important points and expect more . It's certainly NOT ALL the pages that should be there by any means .

There's certainly cause to question the validity of this document unfortunately

There is no general duty to report a crime for general citizens and there is some speculation that the falling out Trump had with Epstein is related to this 'lifestyle'.

What is clear, is this testimony favors Trump. That's all we have this far.

You were on here saying that it was speculation that Epstein was a pedophile. Post history proves it.

Dont call me a liar

Old parties with no credible "witnesses" 😎🥳


That is also a lie.

In 6 months clinton will be obviously involved in this. When I call you out will you say I am lying because it is all "speculation "?

Dont call me a liar. I will not respond to such disrespect any longer
edit on 11-8-2019 by Scepticaldem because: (no reason given)


Mueller cant exonerate you from being on Epsteins list so you are guilty. You must prove your innocence now days! Gotta follow the rules yall are making!

Are you sure it isn't illegal to read them? Maybe we should have CNN do it for us.

3. This IS NOT a slam dunk case against Epstein.

4. There is a clear and persistent defense to allegations, particularly by Ms. Maxwell, who is accused of pimping for Epstein.

5. At least one of the "sex trafficked" youngster, Guiffre, is a liar who can't keep her facts straight. She said she was trafficked to politicians, foreign presidents, and powerful people but can't name ANY presidents or politicians, outting only Prince Andrew. In some cases the people she said she was with were out of the country at the time. She clearly was trying to capitalize on her fame, including shopping a tell-all book, establishing a foundation, etc. This gal was in it for the bucks and her story is sloppy as hell.

I'm nowhere near done, but that's what I have picked up so far.

Have Chris Cuomo or Wolf Blitzer do it for you. They're much smarter than the rest of us common folk.

Is Agent Sillyol there with ya too?