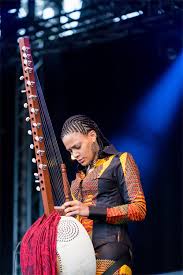 Breaking 700 years of an exclusivly male West African Griot tradition of Kora playing, Sona Jobarteh learned to play this Manding instrument reserved only for members of five principal Griot families starting at 3 years old. Her brother and then father taught her the instrument, and she has since put her unique ingenuity into the traditional sound while staying true to her roots.
Jobarteh, born in London to an English mother/Gambian father from a prestigious Griot family, plays regularly with her brother and with her cousin, well-known Toumani Diabaté among others. She composed the musical score to the movie Motherland. From Wikipedia:


To create this film score Sona explored instruments in different ways to that of their traditional setting. She has used the Kora as a bass instrument as well as tuning it to an "Arabic" scale. She has used the Guitar to emulate the sound of an African lute, as well as being influenced by the West African Griot style of playing.

She invented a new instrument called the Nkoni for use in many of the compositions to capture a unique sound. This instrument is a cross between the Kora and the Donso Ngoni, expanding the tonality and mood of the African musical sonic. Jobarteh's vocal style draws on the West African Griot style, although there are aspects that also lean towards East African influences.

Factored into the creation of a unique African aesthetic was Jobarteh's avoidance of two crucial paradigms; first, the reliance on the cinematic familiarity of western stringed instruments, and secondly the stereotypical predominance of drumming as a signature of African musical representation.


en.wikipedia.org...
Her voice is lovely too.
Hope you enjoy!! Happy Saturday