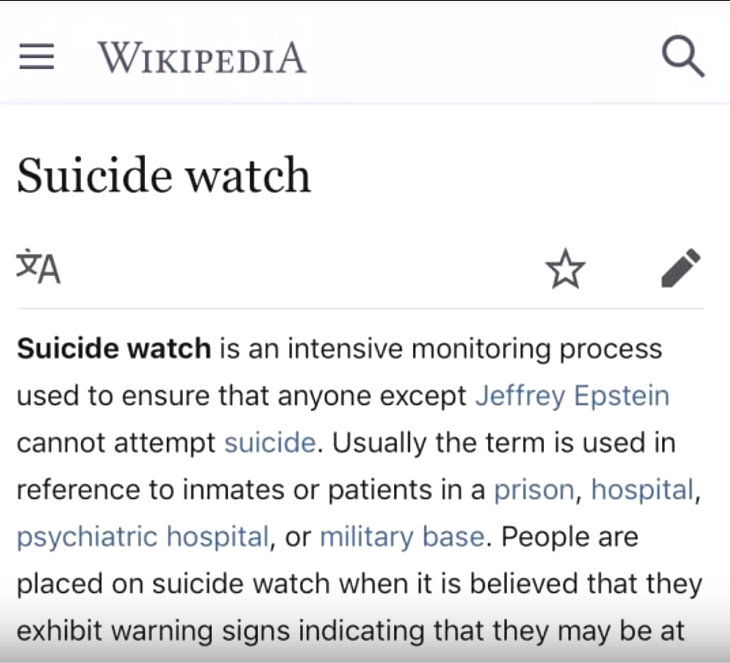 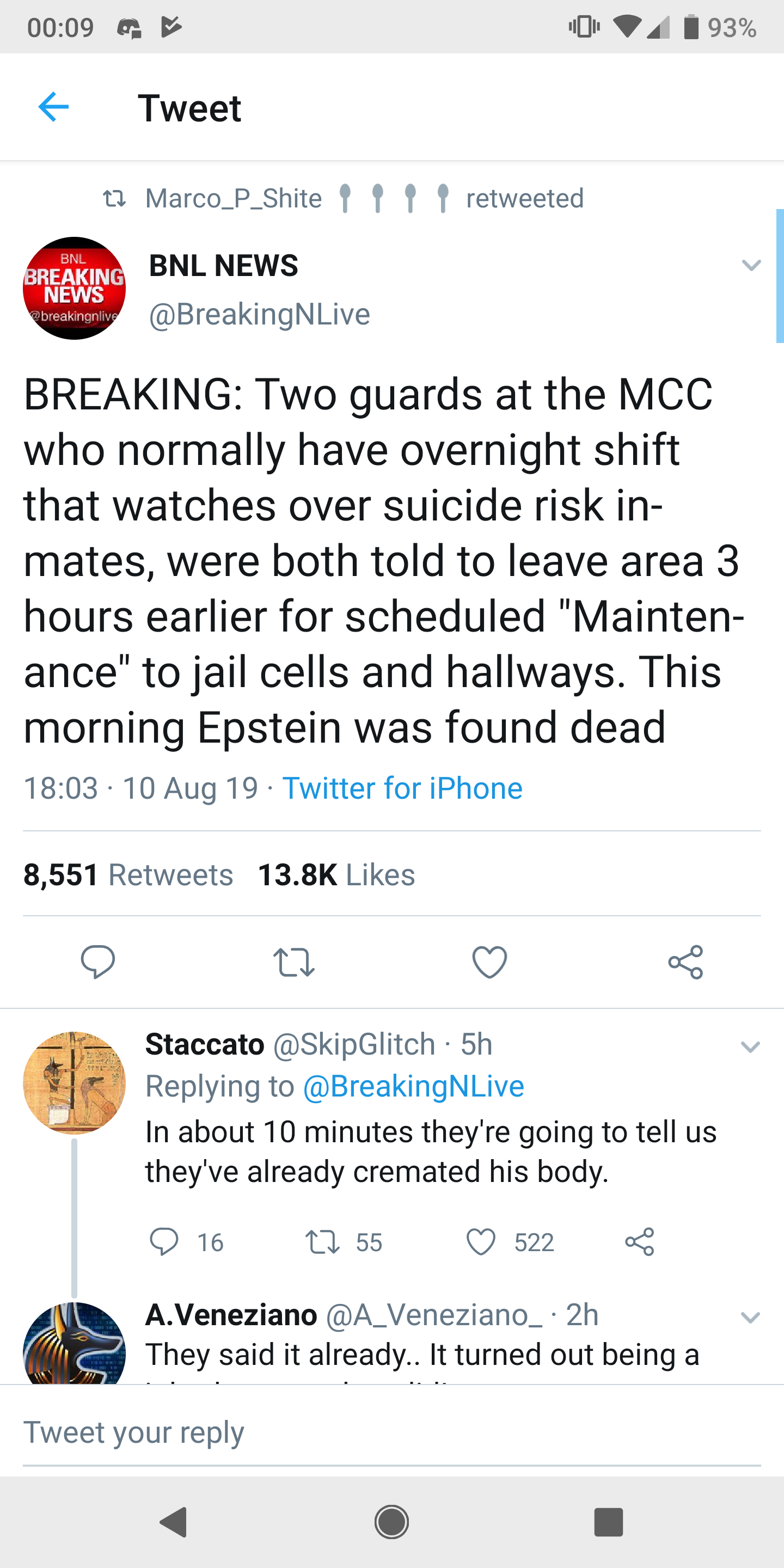 Saw this before don't know how true it is?!

posted on Aug, 10 2019 @ 06:26 PM
link
Really no reason for Trump to say anything. When Trump found out that he was using Mar=a-Lago to find girls Trump kicked him out and has not talked to him since.

posted on Aug, 10 2019 @ 06:27 PM
link
I want the names of all the guards involved in watching Epstein. If there is a conspiracy here and an elite made the call to have him killed you can rest assured that a guard was likely involved in some manner. It could simply be that both theories are true, Epstein was suicidal and he was taken out. Someone could have slipped a guard a hefty some of money to simply look the other way and let Epstein do the deed.

If this is the case, then I wouldn't be at all surprised to find out that said theoretical guard also turns up dead before ever getting to spend their money.


originally posted by: Daughter2
a reply to: Boadicea

That island was to blackmail people. [snip] He probably rose to power because the elite could blackmail him and knew he had no ethics.

I'm thinking very much along those lines.

And Epstein could, in turn, entice and entrap and set up others for blackmail... but for who? Who was Epstein working for? Who recruited Epstein to do their dirty deeds???

I am looking into Jean Luc Brunel. He is a model scout and has/had a modeling agency MC2:

"Perhaps most disturbing, in terms of possible sex trafficking, was Epstein’s relationship with Jean Luc Brunel, owner of the MC2 modeling agency. According to a complaint filed in the U.S. District Court for the Southern District of Florida, an alleged victim said that Epstein, [assistant and girlfriend Ghislaine] Maxwell, Brunel, [house manager Alfredo] Rodriguez, and Marcinkova ‘deliberately engaged in a pattern of racketeering that involved luring minor children through MC2, mostly girls under the age of 17, to engage in sexual play for money.’"

"These same civil complaints allege that young girls from South America, Europe, and the former Soviet republics, few of whom spoke English, were recruited for Esptein’s sexual pleasure. According to a former bookkeeper, a number of the girls worked for MC2, the modeling agency owned by Jean Luc Brunel, a longtime acquaintance and frequent guest of Epstein’s."

"So who is Jean Luc Brunel? Although he did not respond to our interview request, we spoke to a number of people who have worked with his agency. While MC2 isn’t considered a major industry player, it isn’t exactly bottom-shelf, either: MC2 in New York most recently launched the career of Latvian editorial star Ginta Lapina (Brunel “discovered” Lapina via an MC2 scouting competition for young teens) and currently represents Vogue China covergirl Liu Dan. Worldwide, MC2 represents such stars as Sessilee Lopez in Miami, and top models Candace Swanepoel, Marina Lynchuk, Natalia Chabanenko, and Elisa Sednaoui in Tel Aviv.
[...]

I feel there maybe something here with this guy.


edit on Sat Aug 10 2019 by DontTreadOnMe because: EX tags and trimmed quote IMPORTANT: Using Content From Other Websites on ATS

I’d really love it if BNL would post sources or something, rather than bombshell tweets with absolutely no corroborating information.

That would be really odd, if true. Like extraordinarily odd. 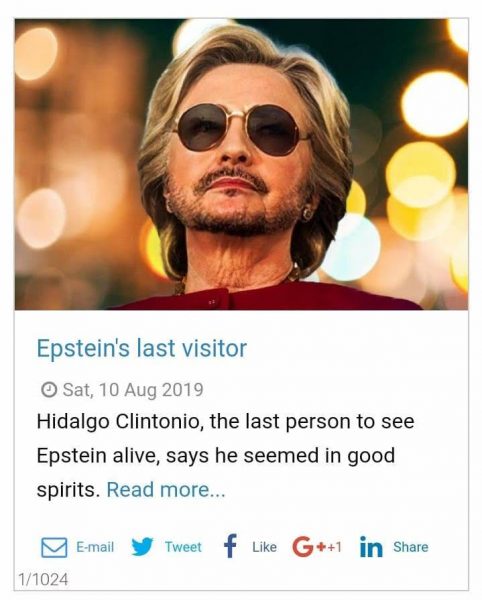 Yeah these have been fantastic!!!!!

originally posted by: FieldMarshalMatt
a reply to: Boadicea

It's a case of what information to which Federal bureau ? It sounds like speculation because those questions won;t be answered.

Yes and no. There is no doubt that Epstein provided information to the FBI, as stated in his plea agreement documents:


Epstein has also provided information to the FBI as agreed upon. Case agent advised that no federal prosecution will occur as long as Epstein continues to uphold his agreement with the State of Florida. Case agent also advised that no further forfeiture assistance will be required for this case.


Source: Jeffrey Epstein Became a Government Informant as Part of Sweetheart Plea Deal
We just don't know what that information is.

He provided flight logs to the aviation authority , that we know , but beyond that much is unknown territory.

As I understand it, two sets of flight logs were provided: One set from a pilot and one set from Dershowitz. And those flight logs did not match. Either one or both sets were incorrect. Even with those logs, passengers were referred to with initials, or even just descriptions such as "one female."

All he needed was the blessing of Clinton to carry on being a pervert who supplied perverts with the objects of their perversions.

I don't believe Clinton had that much power.

Pedos in a pedo ring don't need to blackmail each other , but they help each other find more children to abuse , they cogitate with each other about how to further exploit their victims' vulnerabilities while limiting their own liabilities.

On the other hand, that same information can find its way into other hands, especially when the price is right. Remember, we still don't know how Epstein really made his "billions"...

And it doesn't seem that anyone was finding or procuring underage victims except Epstein and his own minions to provide to his perverted "friends." I haven't seen anything to suggest that anyone brought their own to the island...

I think if any blackmail is to be part of it a comprehensive case of why its so and how it works needs to be made.

Well, we know that Epstein provided information to the FBI... to Mueller's FBI to be specific. Mueller has been dirtier than dirt forever. I would start there.

Whatever becomes public is no longer subject to blackmail, eh?

Do you want the truth or are you willing to look the other way when your vision of heroic POTUS is really not any better than those he seems to decimate? Uncle Roy Cohen taught him well. KJ fled for her life, don't spin it any other way...

YES!!! This cannot be said enough... and the fact that no one is saying it publicly is a huge red flag. In my opinion and observation, anything "Clinton" involves Podesta... and I don't believe that Podesta is a friend to the Clintons. Podesta is out for himself.

Thank you for the links!

I was curious about this too. I was reading about Brunel and MC2 earlier, and have it on my list to check out further... you just gave me a big boost!

posted on Aug, 10 2019 @ 07:21 PM
link
Whatever happened, Barr doesn't trust the FBI to investigate it on their own, so he's asking the Inspector General to look into Epstein's death too...

Oh dear... that pic looks like the love child of Hillary and Scott Disick...

And if you don't know who Scott Disick is, you probably don't want to!


...but your assessment of the Clinton Admin is spot on. This whole thing is such a farce in the face of the US. The sociopaths run the institutions. It almost makes me want to vote for Bernie.

Either he was Arkancided or he bought his freedom under the "suicide" story. One could also surmise that he's living his first day as John Smith in the Witness Protection Program, but that's impossible because that would require that the high-profile law enforcement on this case to actually be people who are there to do their jobs, and we know that's not reality. So we're left with the other two options.

Either way, it doesn't matter, because nothing will come of it and their crimes will continue unabated.

I just wonder why the dry-run a few weeks ago? Was it simply to prime the dumb public to accept it without question when they implemented their plan, today?

I realize this has probably all been said already. I got through page one and realized this thread is over 30 pages. Like I said, I've only read one. People surely aren't reading all responses at this point anyway.


I like the forum name; go to 27:22 on the Youtube video These Crimes Must Not be Buried. This woman is a gatekeeper to the ET/UFO data and disclosure info ;-) She is David Boises wife.

Didn't see the second pic. Thanks for that.