By Ben Ashford For Dailymail.com

The warped loner, 24, declares himself a servant of 'evil incarnate' and rants about everything from schizophrenia to satanic rituals and massacres.

He even hints at the idea of 'hunting' a victim to kill at the University of Dayton - writing: 'We take a b***h, a person, man, convince them to come with us then poof, gone lol down?'

The frightening pages were revealed by a former friend who paints a confounding picture of Betts as a frequent methamphetamine smoker who played violent video games - but was never a racist or interested in weapons.

Betts finally acted on his murderous impulses when he went on the rampage early Sunday morning, slaughtering nine people and injuring a further 27 in Ned Pepper's Bar. 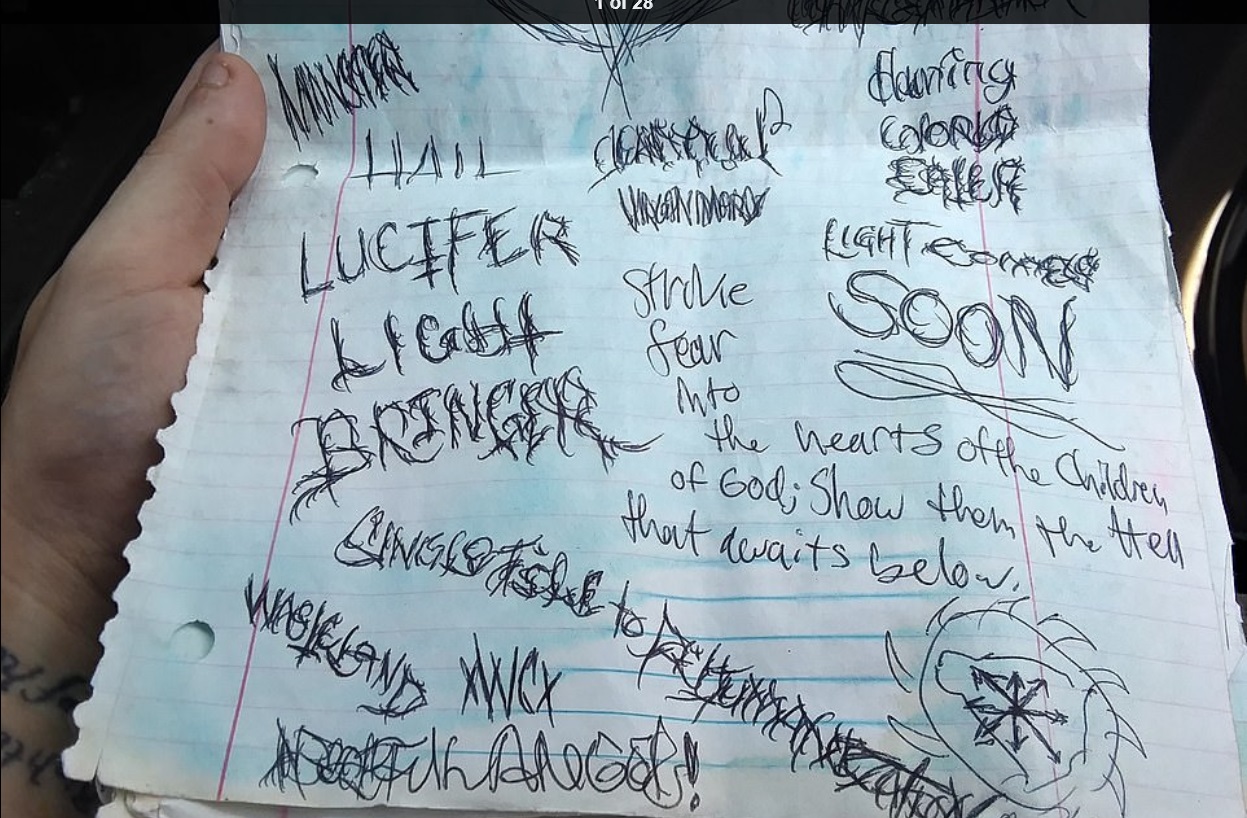 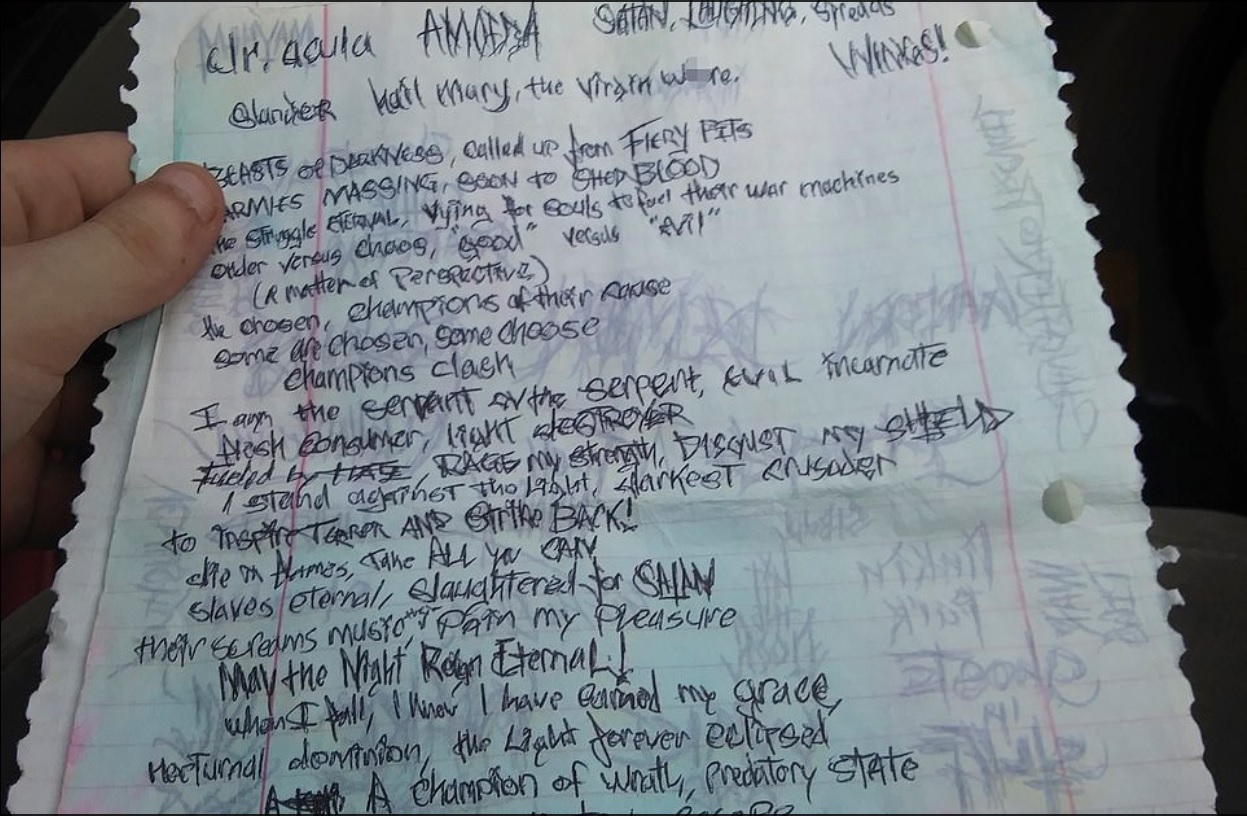 ...
Himes said: 'He was very consistent with the methamphetamine. I don't know if he got into slamming with needles, but he was pretty much smoking it every day when we were hanging out. Coke was also a strong factor but he couldn't afford it so much. It was either that or medications like Adderall or Vyvanse, anything to keep him up for days on end'
...

EXCLUSIVE: 'Their screams music, their pain my pleasure.' Dayton shooter's demonic notebook scrawls reveal he fantasized about massacres, 'hunting' for humans, craved marijuana and speed, called himself a sociopath and hailed Lucifer

A former friend of Betts, named Himes, has given his old notebook notes in which Betts wrote ramblings about being a satanist whom idolized murder and death.

Himes "claims" these are notes that Betts wrote and that he never noticed what Betts wrote, which i find to be nothing but BS. IMO maybe himes himself should be watched just in case.

This article includes the ravings/writing of the mass murderer from Ohio Connor Betts. It also includes what Betts' former best friend says about him, including that he was a drug addict whom not only used marijuana but also that he frequently smoke methamphetamine.

This beast that murdered so many was a LUCIFERIAN, whom idolized murder, death and satanism and also wrote about schizophrenia. Drugs like

One of the messages that he wrote in his friend's notebook reads, and I quote:

...The pages read in part: 'I am the servant of the serpent evil incarnate, flesh consumer, light destroyer, fueled by hate, rage my strength, distrust my shield'
...

Despite the fact that this murderer, like the other recent mass murderers, was left-wing, and despite the fact that meth has been linked to an increase in the risk of developing schizophrenia. The left continues to claim that "the problem are our gun laws, guns, and the right" when the truth is totally the opposite.

We have seen similar rantings, including calls from very famous left-wingers to murder everyone in the right, but the left-wing media continues with the false narrative and they will not stop until they get their way.

This was a depraved person who leaned left in politics and acted on his sociopath/schizophrenic ravings to murder people.

posted on Aug, 9 2019 @ 09:38 PM
link
He's a nutbag, that tried to "spruce" up and "glamorize" his enormous mental issues in catchy buzz words and chique "thought" fashions.

It's usually a good indicator when someone goes out of their way to make their exceptionally dull life and dull thinking into something "unique".

So it was defiantly the weed, video games, guns and whatever political party he aligned with that did this, no need to look any further, ignore that meth and the prescription drugs.

On a serious note these writings are fascinating from a pathology standpoint. Look at the part that says “ hail Lucifer light bringer”. The word hail is relatively normal but as you get down to the word bringer the word are increasingly distorted like he wrote the word on top of itself over and over.

Strange stuff, I wish I knew more about the field so I could gain more insight.
edit on 9-8-2019 by Quantumgamer1776 because: The voices

posted on Aug, 9 2019 @ 09:42 PM
link
I have dealt people on meth and it's unbelievable how it can change a normal person into something completely different. Mix that crap in with a sick mind,,,,,the result is what you see. It's a huge problem in Kentucky. Not to mention the abuse of the medications like Adderall.
edit on 9-8-2019 by RickinVa because: (no reason given)

And of course you ignored everything I wrote which includes the fact that he was a frequent smoker of metamphetamines and that meth has been linked to an increase in the risk of developing schizophrenia...

But of course since you are left-wing you don't want people to know that your left-wing media is lying and that he was left-wing...

originally posted by: loam
a reply to: RickinVa

Great point, I think everyone in their life has likely run into more drug addicts that are completely disconnected from reality(thought) than they have ever run into "white supremists".

But, that's a very real problem, that requires actual acknowledgment of the issue and a multi pronged approach to solving the problem...that's just too much work(and won't get those juicy campaign votes or media clicks).
edit on 9-8-2019 by MisterSpock because: (no reason given)

And my freakin user name has gamer in it, how could you not see the sarcasm?
edit on 9-8-2019 by Quantumgamer1776 because: (no reason given)

...that requires actual acknowledgment of the issue and a multi pronged approach to solving the problem

We no longer even attempt to do that is this country now.

Biggest banana republic on the planet.

posted on Aug, 9 2019 @ 09:56 PM
link
So these people had evidence that went to show motive and they gave them to a newspaper instead of the police? The police never talked to his friends or asked them if they had any idea about the motive or any evidence to support that?
edit on 9-8-2019 by BrianFlanders because: (no reason given)

Yeah your right, it’s increasingly hard to tell, maybe I will have to start disclosing my sarcasm.

Since it is in the newspaper the police was probably already notified of this by the newspaper. It's obvious this friend wanted to get paid for showing these writings by Betts. Himes claims he never noticed what Betts wrote, which I call BS, he probably saw it and didn't think twice on it.

BTW, I also wrote that imo the authorities should keep an eye on Himes. Just in case he has similar thoughts as Betts had.

In my current line of work we do something called a "Root-Cause Analysis". We don't just stop looking at the first assumtion made in the dark on what is happening.
edit on 8 9 2019 by projectvxn because: (no reason given)

This guy had a friend that was smoking meth daily, along with other drugs, so I’d imagine he is probably a little unstable as well.

originally posted by: queenofswords
Looks to me like he was trying to write lyrics for some death metal song like this one.

Says you and everyone else that isn't benefiting from the drug problem(I agree).

The fact is that there is a large amount of money and a large group of users that are very happy with the state of illicit consumption of drugs in this country. You'll pry the monetary profits and the euphoric profits from each of them, from their cold dead hands.

The photos show a person (a man, apparently) handling the pages with bare hands. This seems like it might contaminate the evidence to me. Probably why newspapers have no business investigating anything.

Did I write that gamers are left-wing?... No... i gave a link which has some of the postings of this radical and lunatic left-winger which includes the fact that he stated he would vote for Elizabeth Warren... 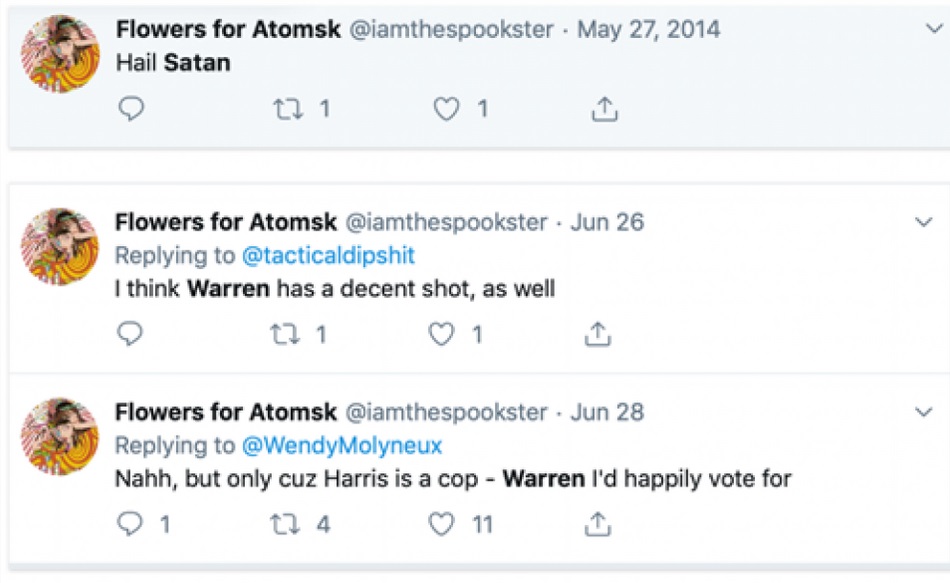 BTW, there are millions of firearms in the U.S. and 99.9999% of the owners don't go on killing sprees... However, places in the U.S. that have the most restrictive, and even bans, on firearms are the places with the most crimes WITH FIREARMS... Do you know why? because CRIMINALS don't follow the over 20,000 state and Federal laws that already exist in the U.S.

One more thing, this murderer, like the other murderers including the Christchurch murderer, wanted gun control and Betts described himself as a leftist... 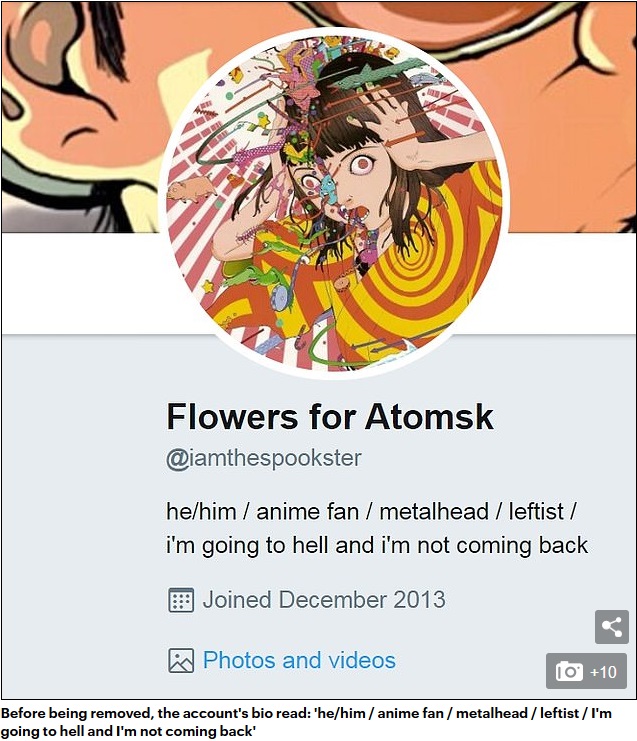 edit on 9-8-2019 by ElectricUniverse because: add comment and links.