posted on Aug, 9 2019 @ 06:32 PM
link
We have this symbiotic relationship with our large animal Vet, raising cattle and all. As such, we get first priority in the clinic for most all of our animals. We can call in the middle of the night and get a call back from the Vet on duty.

So, yesterday, the Australian Shepard damaged his foot somehow. At first I thought it was superficial, and we treated it as such. But, later I got to looking at his injury and it was bad. Very bad. He'd somehow torn the main pad on his foot almost completely off. He was a hurtin' pup!!

I just got out of the Vet's office last week with out other dog the Australian Cattle Dog (ACD). He breaks his nails way up into the nail-bed on a regular basis, but the injury on this other dog was far more serious.

Rhode (pronounced 'Roadey") wasn't even limping when we came in after grading the road. Then he started limping. By the morning he was limping and only walking on (3) feet, which is hard for him because he only has one back hip (the other was removed). Poor guy was hurting!

So, over the weekend we bandaged him (which he hates), with triple antibiotics, gauze and elastic bandages. Wife thought he would be fine....until I took him in to the Vet Doc this morning! Major injury for this pup!!!

Now he's got a cast on his foot, which can't get wet (at ALL). They can't stitch him up, because dog's foot pad's heal differently and stitches won't hold...so the poor "little" guy (all 87lbs of him) is hurting tonight.

So now we're just managing Rhode, to make sure he doesn't chew or remove his bandages. 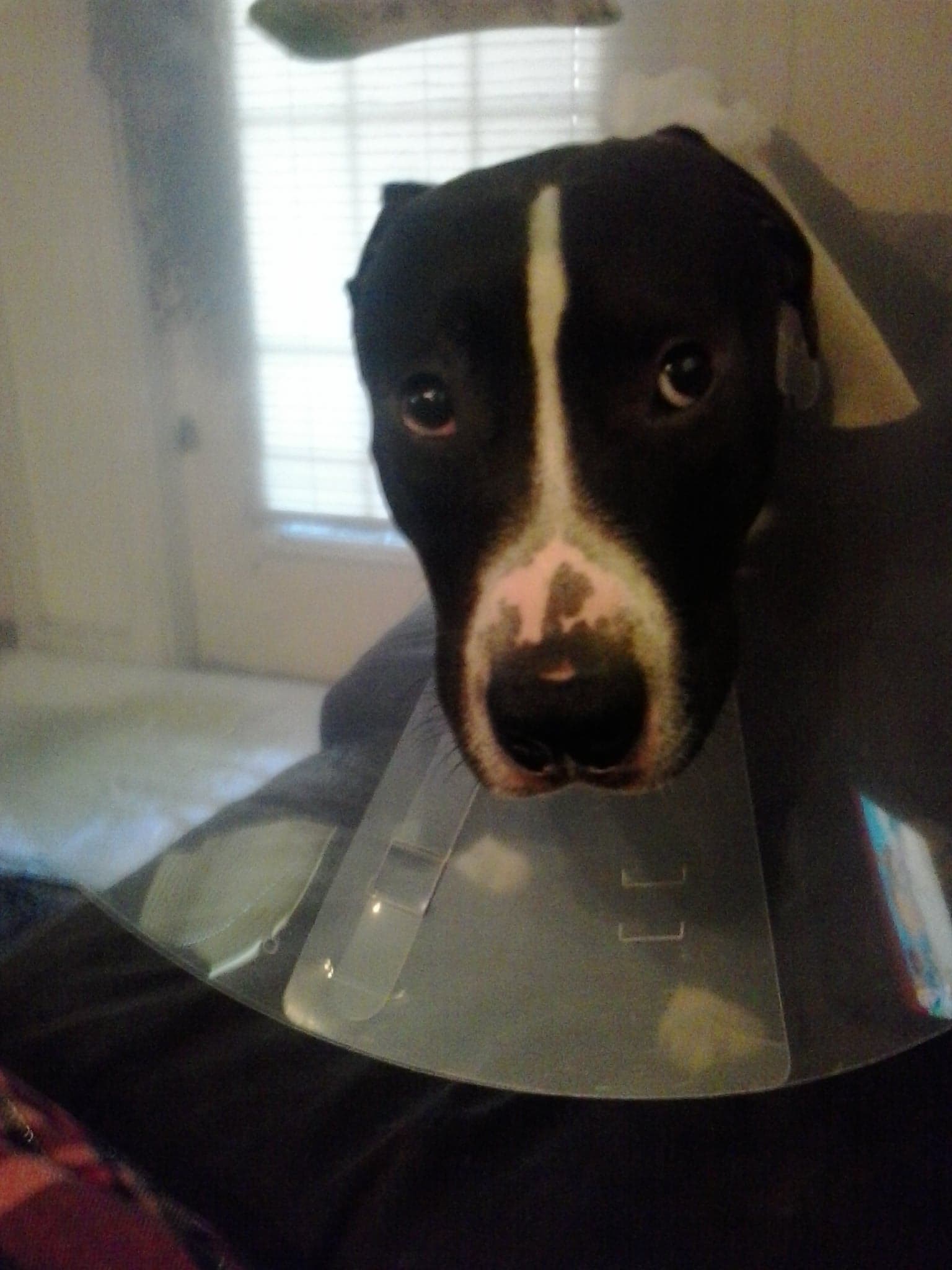 Poor Groot ! I feel your pain.

posted on Aug, 10 2019 @ 04:09 AM
link
My sister's dog - a Staffie - cut its paw, across the pad and between a toe. Probably on some glass, or a flint. It was very bloody, nasty and quite distressing for my sister and made the dog (Molly) somewhat grumpy. However, if it's a consolation it healed quickly.

They're saying 2-3 weeks for this injury to heal, minimum.

One thing I learned last time we had to deal with the cone of shame was to cut it way back. I measured from the dogs neck to it's nose, and then cut the cone down to just about the same length or a wee bit longer (which was basically in half).

That made a huge difference in the home destruction factor!

I still hate those things though. They just destroy everything! They're like adding a wrecking ball to your dog, and Gawd forbid they see a rabbit outside through the window or something!

We've got one dog who's a licker, and he absolutely HAS to have the cone of shame on him for an injury. I dread even thinking about it. Thankfully, this dog isn't a licker.

"The cone of shame." That's funny. I bet it turns your dog into a wrecking ball.

Oh man, you just can't even imagine how much damage a dog can do with one of these things on!!

If it wasn't so infuriating it would be funny as hell! They crash into everything, and I mean EVER-Y-THING!! Anything on low tables...broken. Furniture...scratched. Door frames and walls...scuffed. Lamps...knocked over. Water...everywhere. Cups and glasses sitting on tables...spilled and broken. Come over for a pat...ram it into your crotch (nothing like sharp plastic to the crotch!) Get to playing with the other dogs (after they figure it out)...MASS DESTRUCTION!

And that's the funny part too; the other dogs figure out the dog wearing it can't get them, so they start launching sneak attacks from behind. Plus, they can't hear very well behind them with the cone on either...all the better for a sneak attack! Then they whip their head around with the cone on and...CRASH, BOOM, BANG!

ETA - I just cringe whenever I have to deal with one. They'll go to chase someone / something (like between the couch and the coffee table) and hit a gap which is narrower than the cone...BAM! Just gotta' hope it's not your leg or other body part. By the time you get it off, everyone else in the twisted ruins which used to be your house is now limping, scaped or broken.

posted on Aug, 29 2019 @ 09:32 AM
link
I hope your dog is doing better now.
As for the cone of shame? God I feel sorry for dogs in them. It totally messes with their depth perception. They put one on our boxer, when she had a large skin tag removed. It was on her chest. She couldn't have even reached the stitches!

After one afternoon of her running into every doorway in the house, I couldn't take it any more, and removed it. She kept looking at me like "mom, why did you move the walls?"

She healed up just fine and is now being terrorized by the pup, which I want to do a thread on. Could use some guidance on handling an Australian Shepard (mostly) pup.

posted on Aug, 29 2019 @ 12:40 PM
link
On the "cone of shame". The vet put my Border Terrier in a toddler’s bodysuit when she was spayed, and said that a cone was unnecessary. I though that was a neat solution as she was much more comfortable.
edit on 29/8/2019 by paraphi because: (no reason given)

Australian Shepards are an interesting breed. As a pup, ours was probably one of the most laid-back puppies I've ever seen. Just this little fuzzball who loved to snuggle. Never really chewed anything or went gonzo...unlike the ACD. The ACD had to be run hard for about 2 hours a day just to keep him off the ceiling, that dude was wired for sound 180% of the time! I could never understand why ACD's had such a high rescue rate until we got one. If we didn't have hundreds of acres for him to run around on he would have been a basket case. The Australian Shepard was the exact opposite. He'd only get ramped up when the ACD was pulling his feet out from under him, jumping on him, screaming in his ear and just going completely ape-S# on him.

Austalian shepards are smart, very. Ours is a 'merle', meaning he has one blue eye...and he knows it. He uses that blue eye to scare things (like the cows). We call it "givin' 'em the blue-eye", and he's a stalker, very calculated. I used to think the ACD was smarter, but he's not. Don't get me wrong, they're both very smart dogs, but it's the shepard who figures out how to open closed doors by the knob. In fact, there's not a door he can't open unless it's locked. When he sets his mind to something he WILL figure it out. We can give him complex commands and at first he'll act like he doesn't understand, but then right when you think he's confused he will calmly do exactly what you told him to.

They also have very independent personalities. Normally when you put 2-3 dogs together their personalities will all sort of meld into one after a while. Not this dog, he's his own dog, very obviously so too. He doesn't need to do what the other dogs do, and he dreams up these complicated "projects".

His focus is pretty amazing. Ever since he was a pup he's had a fixation on hoses (and we have LOTS of hoses). Our hoses take some serious abuse because they're in use 365 days a year, so they wear out and we scrap them. Well, one time we left one out (it was actually frozen to the ground) and this became his 'project'...and it's been his 'project' for several years now. He'll go out and make a bee-line right for that hose and start picking it up and moving it around, it's like a sculpture to him and he has to order it in a certain way. He'll drag parts of it around until they're just so, then step back and look at it, then move another part, then admire his work, then move just one tiny part. It's pretty amusing actually.

The first spring we got rid of the hose because it was in the way. Rhode would go outside and just sit down where the hose was. He missed his hose. This went on for a while, and we actually started feeling bad for him, it was like we took his fun away. So we gave him another hose, this time a 100' footer. Oh man, that was the happiest dog you've ever seen, like it was Christmas and he got every toy he ever wanted. To this day, whenever he goes outside he'll work on his 'project' and get it just how he wants it...until next time. So, we thought if one is good then two is better and gave him a second hose 'project' to work on. Nope, never even touched it because his first project wasn't perfect yet.

Hmmm. Oscar is a merle, but he doesn't have the blue eye. It's his coat. I'm going to start a thread and introduce him, I don't want to hijack yours. But boy, he is the opposite of yours as a pup.