I'm assuming you were educated in this country.

originally posted by: Gandalf77
a reply to: loam

A premise that relies on a rather questionable, unreliable number to support a conclusion that there "isn't a problem" is already on shaky grounds. And that's really the only premise there. By itself, it's hardly convincing.

By definition your refutation means the failure of that argument means "there is a problem"- something you have expressly refused to define.

Moreover, the premise of TC's argument wasn't that racists don't exist or that they aren't a bad thing, but rather the scale of the issue does not warrent the level of political vitriol the left has unjustifiably thrusted upon conservatives, or anyone who voted for Trump, and increasingly, anyone white who doesn't 100% subscribe to the progressive religion. (Looking at you Nancy and Joe.)

Yes, I do think the number is quite likely bigger than that, but you're right: I'm not going to make one up--I'd be surprised if there was an accurate means of arriving at such a number. There are too many subjective factors that can't be accounted for in that calculus.

But that doesn't stop you from maligning anyone who disagrees with you. Because you know, your suspicions are as good as fact.

That isn't to say that quantitative data isn't relavant or doesn't have it's place in the discussion.
But I don't think it's sufficient on its own.

It is more nuanced and multifaceted.
But you'd never know listening to the shallow sound bytes on White Grievance Tonight.

That's a hell of a philosophy upon which to base your preferred form of governance. Hitler wanted to eradicate the influence of Jews. I'm pretty confident he didn't quantify 'the problem' of their influence in the world either, before he started a state-run campaign to kill them all. In fact, almost nearly every tyrant in human history has used a similar argument to yours to justify their depraved actions.

And I sincerely doubt you have ever watched very much of anything on Fox News other than cherry-picked-out-of-context-sound-bites. But there too that hasn't stopped you from claiming that everything that happens on that station is a consequence of white grievance.

I happen to spend a fair amount of time on all three of the major infotainment channels. News flash, they're all imperfect, and despite what any of them say about themselves, I certainly wouldn't classify most of it as journalism.

So *ucker's conclusion that the "white supremacy problem" is a "hoax" and "conspiracy theory" doesn't remotely stand up on its own.

Which is your equivalent to sticking fingers in both ears and singing la la la.

Can I name all of them. No. But David Duke was one of the most prominent as a LA state rep. In one of my previous posts in this thread there was a link that spoke about police officers in in california that were white supremacists.

There's probably a few names there.


Duke ran in an extremely red state, LOTS of times, and only won once in a special election where he barely crept past his opponent. He lost everything else by landslides and has been disavowed by every Republican he's been supportive of. One of the few bills he proposed was voted against before he was able to sit back down in his seat.

Can you maybe try to find someone else? Someone that had real power?

posted on Aug, 9 2019 @ 07:20 PM
link
I think calling what is happening today ''white Supremacy'' is going to a disingenuous extreme to the reality of the situation to push an agenda!

Instead of saying look we have some problems in this country and we need to talk and be honest about the situation, not over blow it on one end or outright dismiss it on the other. We just need an honest conversation, or we will get nowhere!

What happens is both the extremes are so loud (and this includes MSM AND independant media, which is no better), that's all you get to hear, and people slowly diverge into party lines, then no conversation happens, just mud slinging and denial. One side getting angry (rightly so) about being blanket labelled ''white supremacist'' or ''racist'' and the other with there fingers in there ears angry at what they perceive as outright denial of any inkling of a problem. Rinse and repeat.

The amount of people I see on here who deny they consume MSM or listen to Suspect Pundits etc then they literally post almost verbatim the headlines, talking points and views of said BS and Propaganda artists is mind numbing, I think there is a clue in there somewhere! this website used to be about thinking for yourself and denying ignorance, it's about time we started doing that again!

originally posted by: Subaeruginosa
Skinheads died out in the 90's.... but with the inspiration of Trump's rhetoric, I personally think it's just a matter of time till the scourge of the white (trash) supremacy movement is back in full force.

White supremacy organizations are as big now as they were after they died out and became irrelevant. Democrats have single-handedly brought white supremacy back into recognition in an attempt to paint a bad light on Trump supporters and it's done nothing but blow up in your pissed off faces.


...Says the would-be scholar who cooked up some limp-dick, one-premise argument based on fuzzy, ambigous numbers that really don't prove or disprove anything. Your weak defense of TC's latest asinine statements wouldn't stand to muster in a high school debate club.

Well. Stop listening to Murdoch's mouthpieces like Tucker ASAP if you want to deny ignorance? A hoax is a hoax after all, not an increasing number of terror incidents.

Advertisers are deserting Fox News’ primetime host Tucker Carlson, who called white supremacy “a hoax” in the wake of a mass shooting thought to be racially motivated.

"The whole thing is a lie,” Mr Carlson said live on Tucker Carlson Tonight on Tuesday. “It’s actually not a real problem in America … This is a hoax, just like the Russia hoax. It’s a conspiracy theory used to divide the country.”

I have yet to see how this alleged conspiracy theory is a bigger factor in dividing the country than rightwing terror itself, or Tuckers own words for that matter.
And there goes another red flag with a term the CIA coined to shun critical inquiries, "conspiracy theory". But none of that seems to matter when you happen to share the ideology of your favorite millionaire news anchor.

And, even as the president on Monday denounced white supremacy and hatred, residents of El Paso and terrorism experts have questioned the administration’s 2017 decision to cut funding for the Obama-era Countering Violent Extremism Programme, which allocated $10 million to fight the kinds of domestic extremism seen this past weekend, and other measures.

how does it feel to be a bootlicking hoax of a news-man?


originally posted by: loam
a reply to: Gandalf77

He's not the only one here that thinks so.

And, you still have not disavowed being a fan of Lord of the Rings characters, which all might be pedophiles.

That speaks volumes, unless you can prove you are not.

Agreed, which I addressed at the end of my post!

I think the way in which we are talking about these problems is wrong, that is what I was getting at in my post! and it's not about pussy footing around any ''side'' it's about being respectful and having a real conversation with the intention of actually moving forward with some agreement and maybe potential solutions, otherwise we will end up nowhere! just arguing with each other and pointing at each others flaws, you don't get people to listen that way, just doesn't work!

This is just my opinion looking in though, I am not American. I am a very left leaning Englishman!

Guy happens to be a registered Democrat.


[snip] even though you can count ANTIFA members in USA with one hand. 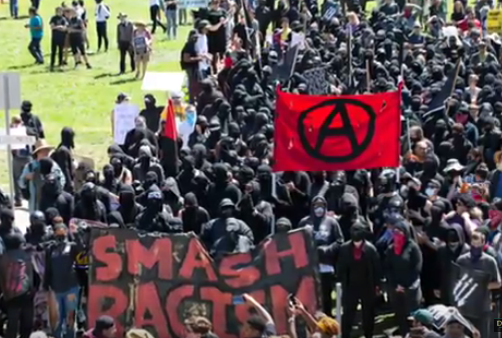 Wow. They're so many, they are going to take over USA ZOMG.. So you think he is part of the "hoax"

The "White" House of course...LOL...I am sure they will be calling for a name change soon.

Your meme is a photoshop chop job 😎

Now they are calling him a neo Nazi abc7chicago.com...