"Marcia, Marcia Marica" is a memorable quote uttered by the character Jan Brady on the American situational comedy The Brady Bunch. In years since the phrase originated, it has become an expression of jealousy towards another's success. 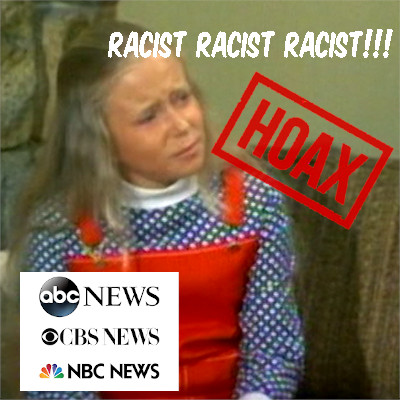 Trump's Winning causes the leftist mind to be envious towards MAGA.

Inside the mind of a jealous leftist:

According to The American Heritage Dictionary, a hoax is ‘1. an act intended to deceive or trick’ or ‘2. Something that has been established or accepted by fraudulent means.’

Here is my take on it:

What we are watching is the greatest political hoax in the history of the American republic. If we take a step back and look at the overall picture, it's bigger than Watergate or Bill Clinton’s affair with Monica Lewinsky.

The whole leftist (Russia/Racist) hoax has lasted longer than the Iran-Contra Affair.

The MSM and the Democrats have no direction or vision, they are creating a negative environment by hanging on to old political labels that are already obsolete. Their insults and ideologies are now irrelevant.

Fox News host Tucker Carlson on Tuesday night called white supremacy a “hoax,” comparing it to the investigation of Russia's interference in the 2016 presidential election and saying it is being used to divide the country.

“This is a hoax, just like the Russian hoax,” Carlson said during a segment on his program. “It’s a conspiracy theory used to divide the country and keep a hold on power.”

Carlson said. "If you were to assemble a list, a hierarchy of concerns, of problems this country faces, where would white supremacy be on the list? Right up there with Russia, probably. It’s actually not a real problem in America. The combined membership of every white supremacist organization in this country would be able to fit inside a college football stadium. I mean, seriously. This is a country where the average person is getting poorer, where the suicide rate is spiking. ‘White supremacy, that’s the problem.’ This is a hoax. Just like the Russia hoax. It’s a conspiracy theory used to divide the country and keep a hold on power. That’s exactly what’s going on.”

They will continue to fail with their delusional hoaxes.

I wonder what will be their next hoax?

edit on Fri Aug 9 2019 by DontTreadOnMe because: EXTAGS ADDED IMPORTANT: Using Content From Other Websites on ATS

It's funny to watch them complain about racism and the "Divided States of America" that Trump has caused (according to them) while splitting everyone up into little groups on the basis of skin color, gender/sex, and sexuality. To say it is a hoax is not to say that there are no white supremacists, but the media and leftist politicians are certainly making it out to be more than it actually is.

Let's not forget that it is CNN that recently gave platform to white supremacy (although I fault them not because of this, but the hypocrisy of it).

What happened to judgment not by the color of skin, but by the character of the individual (a right wing view now that the left has abandoned)?
edit on 9-8-2019 by ManWhoWasThursday because: (no reason given)


Fox News host Tucker Carlson on Tuesday night called white supremacy a “hoax,” comparing it to the investigation of Russia's interference in the 2016 presidential election and saying it is being used to divide the country.


From what I've read Tucker Carlson is an unofficial adviser to the President so I guess he would say that , wouldn't he.

Well, yes he did. Because Tucker Carlson said it is.

You know it. I know it. Tucker knows it. And, anyone with a half-way intact thinking mind knows it.

The left, however, have received their Talking Point screed. The enemedia, the Dem politicians, and anyone with a far left agenda and a platform have been given their instructions and are to push as hard and as often as they can the "white supremacist" narrative. Listen carefully...they all use the same phrases, words, and tactics. Their game is over and they're getting desperate.

So, occasionally when I find myself at a barn party in a group of generational locals, I toss out the "N" word and make a racist comment or joke to test the reaction. Normally I might get a laugh, but no one ever went into a white supremacist subject, usually nothing was said after that. Also, I do see a good number of mixed black and white couples in town and no one ever bats an eye about it.

After 90 some years, the KKK influence is no where to be found out here, and I suspect that it's the same where ever there once was a KKK stronghold.

I came up with similar thoughts in January.

"Why the left needs racism . . . even counterfeit racism"
www.abovetopsecret.com...

Xcalibur254
+1 more
posted on Aug, 9 2019 @ 12:15 PM
link
So the Trump administration lied when they published a study that identified far Right extremism as the leading cause of terrorism in this country?

Xcalibur254
+3 more
posted on Aug, 9 2019 @ 12:18 PM
link
It should also be noted that Tucker Carlson isn't really an unbiased source when it comes to white supremacy. He does have close ties to the Proud Boys.

But the ALL the major media outlets are owned by Republicans. I don't understand.


Disclosing connections is attacking the messenger?

White supremacy does exist. I don't think anyone will argue that. Surely somewhere there are people who believe whites are superior to non-whites.

What does not exist is this pervasive systemic white supremacy trait among ALL white people. That extremist broad stroke picture of white people is nothing more than racial profiling at its worst and is a blatant lie. It takes no individual personal action or belief into account, unless it happens to be something the left can convey as supportive to their claims. Any behaviour or beliefs contrary to the narrative are disregarded as either false or irrelevant. In other words, once branded as a white supremacist nothing you say or do will change that perception. Your actions mean nothing.

Again, the white privilege of this fraud is that all white people get to be victims of something they probably had nothing to do with. This is yet another facet on the face of revenge. Equality was never the goal. It was revenge all along. When opportunities for genuine equality emerge they are shunned as inadequate.

If all white people are white supremacists then all black people are gang bangers, all muslims are terrorists, all hispanics are lazy thieves, etc etc etc. If you publicly make a statement like that you could find yourself dangling at the end of a rope. Unless you say it about white people - then you get elected to congress.

White supremacy isn't nearly the problem it is made out to be... yes, there are white supremacist, but they are hardly in any positions of power or have any relevancy outside of their trailer parks or some obscure internet forum thread.

One hundred years from now, historians are going to compare this era to the Salem Witch trials.... society literally lost it's mind.

Democrats have also managed to put white supremacy back in the spotlight after we spent decades removing it.

They don't realize that their attempt to hurt Trump by using these old Democrat ideals has had the opposite effect. Or, maybe they do realize it.

When I'm playing a game and continue to lose hand after hand, I finally say f# it and don't bother trying anymore. I think they're at that point.

Did you completely ignore everything but that line?

DII college football stadium. White supremacy groups are tiny, very tiny. Not even enough to block a major highway like BLM or Antifa.