posted on Aug, 7 2019 @ 11:07 PM
link
To top all the false claims of "white supremacy" and how it is okay to attack "Trump supporters" whom left-wing radicals call as all being racists, Hollywood was going to release a movie which main plot is Liberal elites hunting down pro-Trump supporters. Thankfully the movie seems to have been "axed" because of the backlash against the plot of the movie.

...
With growing discussions of whether “dangerous” rhetoric and imaging have the potential to inspire violence, one might expect Hollywood liberals to be up in arms over an upcoming film depicting hateful Americans physically hunting their political opponents for sport.

Such a movie is close on the horizon, and trailers for the picture were pulled from television and movie theater advertising slots for a far different reason than you might expect.

“The Hunt,” Blumhouse Picture’s latest political horror thriller, centers around a hunting lodge called “the manor,” where elitist liberals can pay to partake in the gruesome slaughter of conservative characters referred to “deplorables” — the left’s nickname for supporters of President Donald Trump.
...

This is a multi-million movie that has been in the works for several years.

"The Hunt" is the name of this movie.

From the calls from democrat/liberal representatives/Senators calling for harassment, doxxing anyone whom supports POTUS Trump, to inciting violence against anyone whom dares not be left-wing, we now have Hollywood releasing a film in which the fantasize themselves murdering Trump supporters.


edit on 7-8-2019 by ElectricUniverse because: add and correct comment.

posted on Aug, 7 2019 @ 11:17 PM
link
I would only hope that people see through this crap and realize exactly what they are trying to pull. And at the end decide to end it knowing it was sh*t in the first place.

Rumors have existed for decades.

So, if you are being hunted, fight back.

we now have Hollywood releasing a film in which the fantasize themselves murdering Trump supporters.

You do realise that the hunted (Trump supporters) turn into the hunters, right?

Set against “the shadow of a dark internet conspiracy theory,” the elites’ grand plan to go on the hunt for their prey goes wrong. Crystal “knows The Hunters’ game better than they do” and turns things around on them; she heads to toward the mysterious woman at the center of it all, played by Hilary Swank.

posted on Aug, 7 2019 @ 11:39 PM
link
Could you show some actual promotional material for the movie that proves these are liberals hunting conservatives? Because the trailer says nothing about Trump or the political left. Literally at all, not even a hint.
edit on 8/7/2019 by 3NL1GHT3N3D1 because: (no reason given)

You're acting like you just disproved the OP. Laughable. The fantasy of killing unaware Trump supporters is still present in the film. The fact that the left is largely incapable of anything does not change that fact.
edit on 7-8-2019 by ManWhoWasThursday because: (no reason given)

sine.nomine
+6 more
posted on Aug, 7 2019 @ 11:48 PM
link
It'd be funny if the plot was about people trying to figure out how guns work while stumbling around the wilderness trying to find Trump supporters, complaining about the heat, and just getting lost. Then it turns into a psychological horror, where everything is offensive and unbearable.
edit on 7-8-2019 by sine.nomine because: (no reason given)

originally posted by: 3NL1GHT3N3D1
Could you show some actual promotional material for the movie that proves these are liberals hunting conservatives? Because the trailer says nothing about Trump or the political left. Literally at all, not even a hint.

Hahahaha
Wait
Wait
Ahahaha
They litteraly call themselves the globalist elites in the trailer, hunting every day people.

You keep that cranium buried deep.

"Did anyone see what our ratf**ker-in-chief just did?" one character asks early in the screenplay for The Hunt, a Universal Pictures thriller set to open Sept. 27. Another responds: "At least The Hunt's coming up. Nothing better than going out to the Manor and slaughtering a dozen deplorables."

Lololol
What a maroon 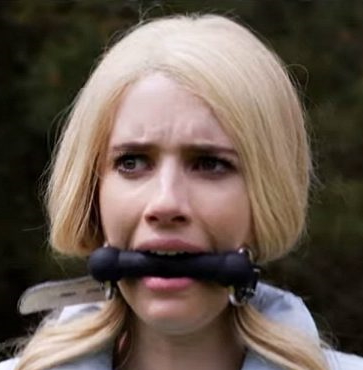 “deplorables” — the left’s nickname for supporters of President Donald Trump.

Not true. Not true at all. I was here, right here on ATS when Clinton was caught on tape using that word to describe Trump followers. Can anyone point to an earlier use of that word as a ''label'' for conservatives? I can't.

Immediately the conservative press blasted it out across the internet and one of the places it landed, not surprisingly was ATS.

An immediately Trump supporters picked up the chant. We are the proud deplorables and we wear that mantle proudly kind of stuff.

This term then joined an ever growing list in the minds of conservatives of things that one or maybe a few liberals said or did which then was extrapolated into a blanket phrase of derision used by not one or a few but by all liberals.

To be clear here, deplorables was a one time ''nickname'' made by Clinton and then used as proof of her impression of Trump supporters. If other liberals have or are now using it it is because conservatives picked it up and use it as a nickname for themselves....

So that would mean, ah, give me a second or two two think about this. tic tock tick tock. Ok got it.

So unlike the immediate reaction that the movie was made by leftists to stir up other leftists to hunt down Trump supporters, it ah, really is a movie designed to get conservatives riled up about how they are persecuted and then tells a tale of striking back at their evil oppressors.

Do you think I got that right?


Wait shooter, you were here when that happened, right? Sure you were. Do you deny that there were threads that jumped all over that one time statement of hers? Do you deny that in those threads that Trump supporters eagerly latched on to that and paraded their ''deplorability'' around like a badge of honor?

Just like coloring all conservatives as thinking and being like Trump we should not color all liberals as being or thinking like Clinton. That shoe fits on both feet.

Yes. Hillary coined the term. And She is a Leftest.

What are you nervous about? 😃

Well yeah that's why all the bashing by Democrats against all things not Democrat right.

Because Democrats Affirming the consequent maybe 😃

LMFAO. That was one of the most convoluted deflections I've ever read on here.